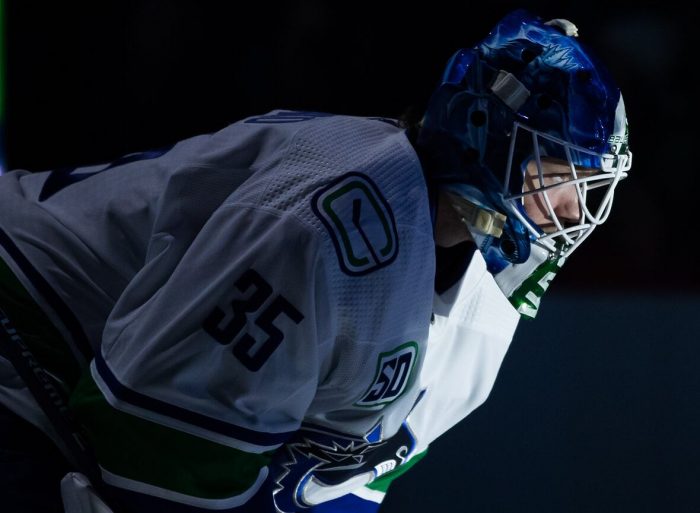 Thatcher Demko. I’ve been waiting to write this spotlight piece for a long time. A long time. I waited until now, though, because I never really had much to write in terms of NHL experience. Until now, that was the case. It’s not anymore. Here’s a look at the hot hand who almost helped a young Canucks team to the Western Conference Finals.

Thatcher Demko was Vancouver’s 2nd-round pick in the 2014 NHL Entry Draft, chosen with the 36th overall selection. The six-foot-four, 192 lb. native of San Diego, California, has been working his way up the ranks since being drafted to be a full-timer on the Canucks roster, and managed to do that this past year.

At 24 years old, Demko is now a prime age to try and break into a starting role. This year, that’s exactly what he had the opportunity to do.

In the NHL’s Edmonton bubble, Jacob Markstrom started for the Canucks, taking them into the second round of the 2020 Stanley Cup Playoffs, but started to falter mid-series against the Vegas Golden Knights. Enter Thatcher Demko, who wowed everybody who might have doubted him.

In four games played, Demko went 2-1, and posted an astounding 0.64 GAA and .985 SV%, along with 1 shutout. His goals against average and save percentage still stand as the best among eligible goalies in the playoffs.

This season’s successes are a small sample size, to be sure. But they are an exciting glimpse as to what lies ahead for the Canucks organization.

Before this season, Demko had played just 10 games in the NHL since being drafted. His total career numbers in 37 games are a 3.02 GAA and a .906 SV%. He has mustered 18 wins in that sample.

Again, those numbers aren’t much of a showstopper.

They also aren’t much of a comprehensive look at his playing career.

For two seasons from 2016-2018, Thatcher Demko was the full-fledged starter for the Utica Comets, the Canucks’ AHL affiliate. He played 45 and 46 games in each season respectively, and posted AHL career bests of a 2.44 GAA and .922 SV%.

His first game in the NHL reflected this success – Demko won his NHL debut 5-4 in overtime against the Columbus Blue Jackets in March 2018. Success at the professional level isn’t all the success Demko has enjoyed, though.

As a Division I hockey player at Boston College, Thatcher Demko was a standout goaltender, earning nods as one of the best college goalies to ever take the ice.

In 2015-16, Demko had 10 shutouts, which still stands as a Boston College record, and stands as second most in college hockey history for shutouts in a single season.

All this success leading up to the NHL is what earned Demko his 2-year deal with Vancouver he signed back in 2019. This contract is likely a bridge deal to phase him into the starting position, something he proved he is ready for in the Edmonton bubble.