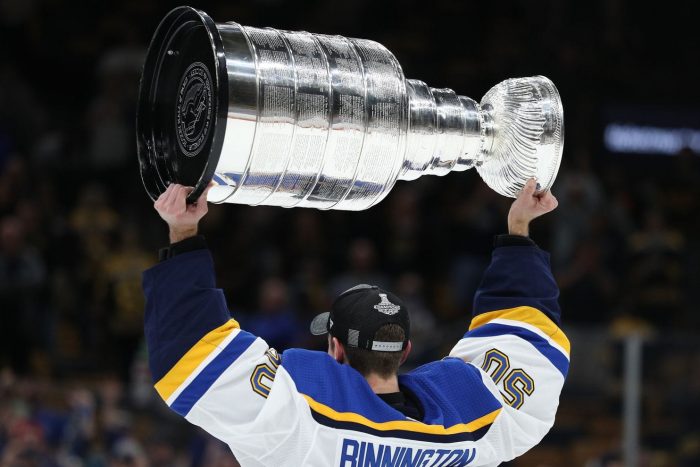 When the St. Louis Blues put backup goaltender Chad Johnson on waivers on December 10th, 2018, no one probably could have guessed that the 25-year old rookie they called up in his place would lead a discouraged roster seemingly unable to win a hockey game to their first Stanley Cup Championship in franchise history. But, when General Manager Doug Armstrong recalled Jordan Binnington from the AHL affiliate San Antonio Rampage, that’s exactly how the rest of the season played out before them.

Born just outside of Toronto in Richmond Hill, Ontario, 6’1”, 174-lb Jordan Binnington was the 3rd round draft choice of the Blues in 2011. Binnington had played in St. Louis’ minor league system up until halfway through this 2018-19 season, when he made his first career NHL start on January 7th against the Philadelphia Flyers, a 3-0 shutout victory for Binnington and the Blues, the first win and shutout of his career.

Just four days earlier, on January 3rd, St. Louis sat dead last in the entire NHL, with a record of 15-18-4, good for a measly 34 points. A good rule of thumb for predicting which teams are locked in for the Playoffs is this: if you’re “in” come American Thanksgiving, you’re “in” come April. The Blues were nowhere near “in” back in November, let alone on January 3rd. Which makes their run, led by Binnington holding down the crease, that much more extraordinary.

In his first 20 starts with the Blues, Binnington posted a 16-3-1 record, with a 1.70 GAA and .933 SV%, along with an outstanding 5 shutouts during the run. This hot start earned him recognition as the NHL’s Rookie of the Month in February. He and his counterpart Jake Allen would ride a hot streak for the remainder of the season, going 30-10-5 from the time they were last in the League standings.

The St. Louis Blues finished the regular season with a 45-28-9 record, good for 99 points and third place in the Central Division, tied in points with the second-place Winnipeg Jets and just a single point behind the Central Division Champion Nashville Predators. At this point in the season, despite the historic bounce back to crack the Stanley Cup Playoffs, many still had no idea just what type of noise Binnington and the Blues could make.

Jordan Binnington is the first rookie goaltender to win a Stanley Cup since Matt Murray did the same with the Pittsburgh Penguins in 2016, earning him a nomination for the Calder Memorial Trophy at the 2019 NHL Awards for the NHL’s best rookie, eventually losing out to Vancouver Canucks star rookie Elias Pettersson. He shouldn’t mind too much, though– after all, Jordan Binnington is a Stanley Cup Champion.