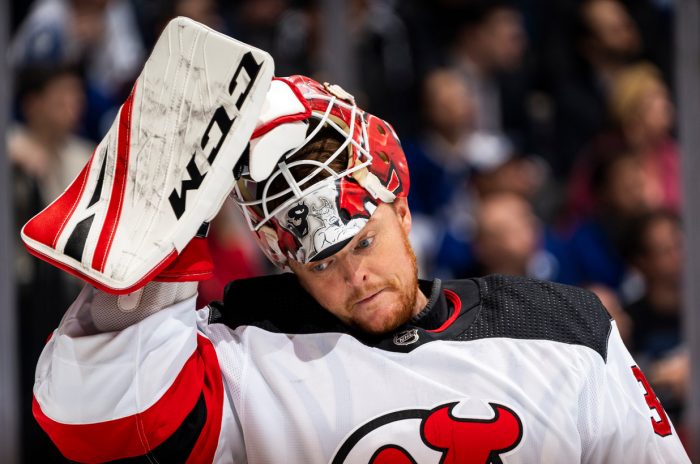 Usually when I choose a goalie to put “In the Spotlight,” it’s because that goalie has recently shown some sort of impressive body of work, or because that goalie is currently breaking into the NHL and showing upside for the future. In this case, however, I chose Cory Schneider. Schneider’s journey of late has been full of anything but impressive feats to write about, but I think it’s worth paying attention to. Here’s a look at Cory Schneider.

When the NHL buyout period began just over a week ago, the New Jersey Devils bought out the remaining two seasons of Cory Schneider’s contract. Perhaps unsurprisingly, the club felt it was time to move in a new direction.

The Devils acquired Schneider via trade during the 2013 NHL Entry Draft, wherein they traded the 9th overall pick to the Vancouver Canucks in exchange. That pick turned into Bo Horvat, the current Canucks captain.

Schneider definitely had his good stretches in Jersey, at least as far as his personal stats go. In his first season after being traded, he finally got a starter’s workload and appeared in 45 games, posting a 1.97 GAA, .921 SV%, and 3 shutouts. This would be his best season statistically with the Devils.

And, of course, the Devils never enjoyed the playoff success they had hoped to after transitioning from legendary goalie Martin Brodeur to the future hopeful Cory Schneider.

In 2014-15, Schneider appeared in a career-high 69 games with the Devils, and played in 57 for each of the next two seasons. The past two years has been a different story, however, and it’s to no fault of his own.

Cory Schneider has appeared in just 39 games over the past two seasons in New Jersey, and famously went a calendar year without a recording a win. If you’ve played goal, you know just what kind of thoughts can creep into your head when you go long stretches without winning.

Injuries caused Schneider to be forced to play in the AHL with the Binghamton Devils for extended conditioning stints, which can also do a number on an NHL-caliber goalie’s psyche.

In May, Schneider made it clear he hadn’t “entertained thoughts of retirement at all,” though some speculated that could be in the cards for the now-34 year old goaltender. Schneider said he remained focused on playing out his contract with the Devils.

Things don’t always work out the way they were meant to, though, and Schneider became a free agent for the first time in a long time this past week.

As a free agent, his body of work in the last few seasons, especially this year, didn’t really bode too well for him.

For guys like Cory Schneider, though, the way you conduct yourself as a professional and make the necessary connections pays off in the end. And as it turns out, the Shcneider-Lou Lamoriello connection just might revive his stagnant career.

TSN’s Pierre LeBrun reported that Schneider and New York Islanders General Manager Lou Lamoriello are in talks to sign him to the team, and add some depth to the goalie position. Lamoriello, of course, was the GM of the Devils in 2013, when Schneider was acquired by the team. The Islanders just loss Thomas Greiss to the Detroit Red Wings in free agency, and are left with Semyon Varlamov – a capable goaltender, but what does it hurt to have another option?

Shortly after LeBrun tweeted this, he followed up and clarified that the deal is a 1-year, $700K contract with the Islanders.

As LeBrun put it, Cory Schneider is one of the good guys in the game. He deserves another chance, and I’m happy to see him be so close to getting one.

Updates will be added to this article as details solidify, so be sure to check back and stay up to date.