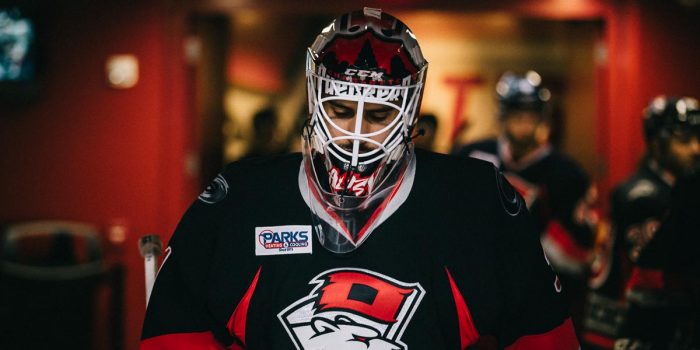 While the Carolina Hurricanes had themselves an unexpectedly excellent season in 2018-19, making it all the way to the Eastern Conference Finals before losing out to the Boston Bruins, they weren’t the only club in their organization to do so. Their farm club, the American Hockey League’s Charlotte Checkers, ended up going all the way– eventually capturing the Calder Cup Trophy as the AHL’s league champions. The Checkers were led by 23-year old  goalie Alex Nedeljkovic, the Hurricanes’ 2014 2nd-round draft choice at 37th overall. Here’s a look at a bit of Nedeljkovic’s background, and what hockey fans can expect to see as far as his progression in the near future.

Alex Nedeljkovic stands at 6’0″ on skates, and weighs in at a healthy 189 lbs. In the world of hockey goalies, however, he’s considered a relatively small one. His size has always been a talking point regarding his game, but he has done all that he can in his young career to prove doubters wrong about his being too short to be effective in the big leagues.

The Parma, Ohio, native Nedeljkovic spent much of his junior career representing the United States at the international level, competing in multiple World Junior Championships between U18 and U20 tournaments.

In the 2013-14 season, Nedeljkovic was part of the USA Hockey National Team Development Program, and was part of the U.S. National U18 team. He returned for back-to-back years in 2015 and 2016 with the U20 squad to represent the red, white, and blue, and captured a Bronze medal in 2016. Nedeljkovic appeared in 6 games in 2016 after not seeing the ice the year before, posting a remarkable 1.66 GAA and a .934 SV%.

Nedeljkovic also had a storied junior career, bouncing around the OHL playing for a number of teams: the Plymouth Whalers, the Flint Firebirds, and the Niagara Ice Dogs. Nedeljkovic was named to the OHL All-Rookie Team in 2013 in his first year with the Whalers, and made the OHL First All-Star Team in 2014.

Nedeljkovic made the jump from juniors to professional hockey in the 2016-17 season. He joined the Charlotte Checkers, Carolina’s AHL affiliate, in a backup role and played in 25 games that season. He posted a 3.40 GAA and an .881 SV%.

Also in the 2016-17 season, Nedeljkovic appeared in 1 game for the Hurricanes, allowing 0 goals against on 17 shots.

In 2017-18, Nedeljkovic took a step forward, playing 49 games for the Checkers. His stats also improved drastically, as he got his GAA well below 3.00, and his SV% over .900. That season, Nedeljkovic posted a 2.55 GAA and a .903 SV%. His performance during the regular season earned him the role of starter in the playoffs, too. In 8 Calder Cup Playoff games, he posted a 2.11 GAA and .919 SV%, great numbers for a young goalie playing in his first professional postseason.

If his second AHL season wasn’t enough of a step forward, Nedeljkovic took it even further in 2018-19. In 51 GP, Nedeljkovic posted a 2.26 GAA and a .916 SV%, numbers reflective of a true starter. His numbers in the Calder Cup Playoffs were great, too– he recorded a 2.34 GAA and a .916% in 15 GP. And to put the cherry on top, Nedeljkovic and the Charlotte Checkers captured the Calder Cup Championship, defeating the Chicago Wolves 4 games to 1 in a best-of-7 series in the Finals.

Aside from leading the Checkers to a Calder Cup Championship, Nedeljkovic also appeared in 1 game for the ‘Canes in the 2018-19 season, against the Vancouver Canucks. Carolina won the game, and Nedeljkovic allowed just 2 goals on 26 shots. His career NHL numbers over parts of 2 games include a 1.33 GAA and .953 SV%.

With the Carolina Hurricanes hanging onto goalie Petr Mrazek and acquiring goalie James Reimer from the Florida Panthers, it doesn’t appear as if Alex Nedeljkovic is slated to crack the NHL squad just yet. But with the performance he’s demonstrated to date and the accolades he’s earned thus far, including an AHL Championship, it looks as if Nedeljkovic is poised to rise through the ranks as quick as he has in the past. One thing is for sure: Alex Nedeljkovic is one of the most talented goalie prospects out there today.