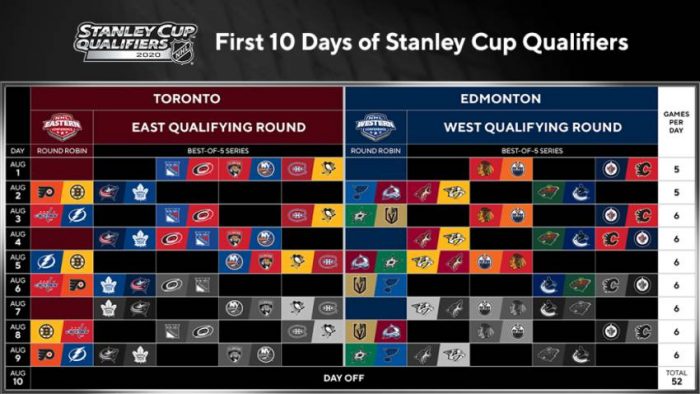 Well, it’s official. The NHL is back on August 1st, and the 24-team Stanley Cup Playoffs you’ve been hearing so much about for the past few months are finally going to happen. 24 teams means 24 goalies getting their chance to shine – some veterans, some rookies, and some first-time playoff appearances. For details and format, I recently broke down the 24-team Return to Play (RTP) plan, so go and check that out if you so please. But now, here are the most exciting goalies to watch in the NHL’s 24-team playoffs, according to me.

The qualifying round of the Stanley Cup Playoffs are set to be interesting, and looking at the goalies rostered on the 24 teams makes it even more interesting. Even more interesting than that, some starters could choose to opt out or be deemed “unfit to play” if they are either concerned for their own safety, or test positive for COVID-19. So, I’ll be mentioning from backup goalies for good measure.

There’s a mix of playoff veterans, rookies, and first-time playoff goalies who can make an impact and help their teams move on to the next round.

Let’s start with goalies who are on a bye. That is, they play for one of the Top 4 teams in either conference, and have a bye before playing the other top teams in the round robin.

In the East, the Top 4 teams are the Boston Bruins, the Tampa Bay Lightning, the Washington Capitals, and the Philadelphia Flyers. What a loaded card – two of the three Vezina Trophy frontrunners are in this round robin, in the Bruins’ Tuukka Rask, and the Lightning’s Andrei Vasilevskiy.

The Boston Bruins boast one of the best one-two punches in the entire NHL. Tuukka Rask is considered a Vezina favorite this year, and his backup Jaroslav Halak ain’t too shabby, either. In the 2019-20 regular season campaign, Rask won 26 of his 41 starts, and posted a 2.12 GAA and .929 SV%, with an astounding 5 shutouts. Halak also played a large share of the games with 31 appearances, and posted a 2.39 GAA, a .919 SV%., and 3 shutouts.

Aside from the Bruins’ fantastic tandem, though, there’s a couple other goalies I’m interested in heading into the Stanley Cup Qualifiers.

In 43 games played this season, Carter Hart went 24-13-3, and posted a 2.42 GAA, .914 SV%, and 1 shutout. For a rookie goaltender in a Flyers sweater, that’s pretty solid. Hart has returned a semblance of dependability to the Flyers’ goaltending position, and it will be incredibly exciting to see him get the chance to play against some well-established vets in Rask, Vasilevskiy, and possibly Braden Holtby (maybe Ilya Samsonov).

Back in April, I wrote about the Rangers’ three-pronged goalie carousel that they need to figure out. It appears they’ll have to do that sooner rather than later. When it comes down to it, I think Georgiev is best positioned to start over both Lundqvist, and over rookie Igor Shesterkin. In 34 games played this year, Georgiev went 17-14-2, posted a 3.04 GAA, .910 SV%, and 2 shutouts.

Sergei Bobrovsky hasn’t looked much like his old self during his first year in Florida. In 50 games played, Bob had a 23-19-6 record, and posted some career-worst numbers: a 3.23 GAA, .900 SV%, and 1 shutout. Despite his struggles in the regular season, though, this is still the same goalie who flipped a switch in Columbus last year and helped sweep the historically good Tampa Bay Lightning. He could very well turn it on again and show out against the New York Islanders in the Qualifiers.

Bobrovsky is backed up by Chris Driedger and Sam Montembault, with Driedger likely to be next in line.

Now onto the West.

In the West, the Top 4 teams are the St. Louis Blues, the Colorado Avalanche, the Vegas Golden Knights, and the Dallas Stars. This is just as loaded as the Eastern card – St. Louis’ Jordan Binnington is coming off of his Cup-winning rookie playoff run, and Marc-Andre Fleury is looking to continue his dominance as Vegas’ frontman.

Aside from Cup-winning goalies and grizzled vets, though, there’s a couple other goalies in the West who could make some noise in the Stanley Cup Qualifiers.

I’ve been waiting a long time for Philipp Grubauer to get his chance at carrying a team into the playoffs as the starting goalie (I don’t count Washington in 2018). In 36 games this season, Grubauer posted 18 wins, a 2.63 GAA, .916 SV%, and 2 shutouts. Despite being sidelined by an injury for part of the season and challenged to his starting role by Pavel Francouz, Grubauer is sure to start between the pipes, and sure to dazzle if the team in front of him plays well.

Francouz played 34 games this season, posted 21 wins, and managed a 2.41 GAA, .923 SV%, and 1 shutout. Michael Hutchinson and Adam Werner also appeared in an Avs sweater, and are in the pipeline if an extra goalie is needed.

The reason I think we should be watching Marc-Andre Fleury in the Stanley Cup Qualifiers is because the man they call “Flower” is out to prove he’s still got it. Back in Vegas’ inaugural season in 2018, Fleury was arguably the best goalie in the NHL (definitely in the playoffs). Since then, however, the Golden Knights haven’t made another run, and Fleury’s stats have gone down year-by-year. Look for him to make a strong case as to why he’s not done just yet, against the defending Cup champs, the St. Louis Blues.

Backing up Fleury is Robin Lehner, who is a perfect 3-0-0 after being traded to Vegas at the deadline. In those games, Lehner has a 1.67 GAA, .940 SV%, and 1 shutout. He is an excellent backup choice to Fleury.

For all intents and purposes, Ben Bishop had a pretty solid regular season campaign in 2019-20. In 44 games played, “Big Ben” won 21 games, and posted a 2.50 GAA, .920 SV%, and 2 shutouts. For whatever reason though, it always seems like Bishop struggles when it matters most, and can’t help the Stars over the hump they’ve been trying to conquer. I’m interested to see if that can change against the Avalanche in the Qualifiers.

Backing him up is Anton Khudobin, who has been a pleasant surprise in goal this year. In 30 appearances, Khudobin went 16-8-4, with a 2.22 GAA, and .930 SV%. That’s a nice insurance package for the Stars to have in their back pocket.

It’s time for Selty’s Sleepers! Here’s three goalies that I think are going to go under the radar leading up to August 1st, but could have a major breakout in the playoffs and lead their teams on deep runs.

I’ve always been a fan of Darcy Kuemper, and it’s hard to believe he’s just now getting his shot at 30 years old. I hope he gets a chance to start over Antti Raanta, because he’s definitely earned it. In 29 games this year, Kuemper had some amazing stats: a 2.22 GAA, .928 SV%, and 2 shutouts to boot. These are really good numbers for what was mostly a middling Arizona team.

What people don’t always remember is that this six-foot-five goaltender has previous playoff experience. NHL playoff experience. That’s right. Over the course of 3 seasons (most recently in 2015), Kuemper appeared in 9 playoff games, going 5-3-1, and posting a 2.13 GAA, .911 SV%, and 1 shutout. He can really take this ‘Yotes team as far as they can go with him.

Elvis has (not) left the building (yet). I believe that the eccentric breakout star for the Blue Jackets has a chance to build upon his regular season success and help give the Maple Leafs a run for their money in the Qualifiers.

The six-foot-three, 26-year old posted a 13-9-8 record in 33 games played this year, along with a 2.35 GAA, .923. SV%, and a remarkable 5 shutouts. Thanks to this guy, the Jackets have a legitimate chance to make some noise. Didn’t something similar happen last year?

I almost feel like it’s an injustice to Hank to put him on my sleepers list. After all, he’s The King. But I’m not sure he’ll even start in the Qualifiers against Carolina – that role will probably go to Georgiev. If the Rangers need a veteran presence with some Stanley Cup run experience, though, I think they know where to look.

That wraps up my goalies to watch in the NHL’s 24-team playoffs. Agree? Disagree? Leave a comment about who you’re most excited to watch starting August 1st.

Episode 49 of Puck SKLS! Join the boys for a shortened mid-week episode, previewing and predicting each matchup ahead of the Stanley Cup Qualifiers beginning Saturday, August 1st. Presented by Pure Hockey.