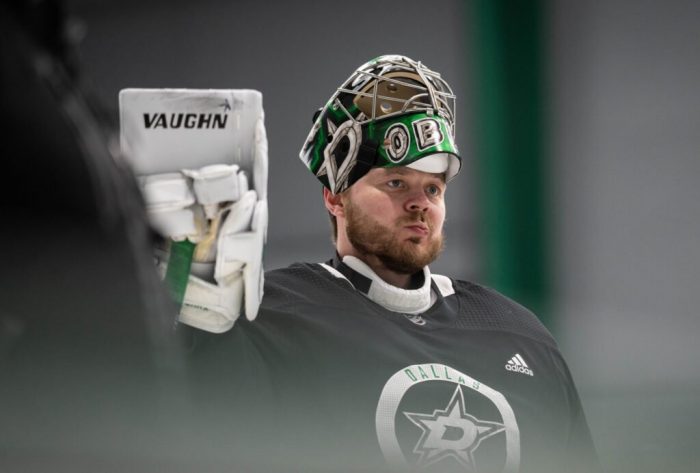 The whole situation between the Dallas Stars and goaltender Anton Khudobin last week seemed to go under the radar for the most part, not gaining much attention in the way of hockey news. And perhaps rightfully so, since it seems now to have been nothing more than an incident of typical organizational discipline on the part of the Stars for Khudobin’s behavior, and looks to be all but resolved at the time of writing.

If you’re not entirely familiar with the incident, here’s a simple break-down: Khudobin was suddenly scratched from the Stars roster for a game, and was not in attendance at practice. Stars Coach Rick Bowness expressed the uncertainty of Khudobin’s potential to miss more than one game, but added that communication with any player regarding discipline is “very open.”

“We’re a family and we’ll deal with things internally,” Bowness said, “but you deal with things by communicating and making your feelings known on what is and what isn’t acceptable. I have very few rules, but you [darn] well better follow them.”

Khudobin did apologize, saying he slept through his alarm and was late to practice. He skated after practice, but was scratched from the next game.

“I’m happy to be back,” Khudobin said. “Yes, unfortunately that happened, but it’s not really a big deal. I talked to the coaches, it’s all fine, all settled, so I’m back.”

This situation isn’t the thing about the Stars that’s concerning to me right now; what I’m concerned about is their goaltending depth.

To be more specific, I’m concerned about their short-term goaltending depth. I think this team is well-equipped in that department to be successful down the road, but right now, they could be in trouble. If Anton Khudobin were to sustain an injury or go on a cold streak, it could be time to hit the panic button.

When Khudobin went down, it was the 22-year old Jake Oettinger who was thrusted into the starting role, and making his NHL debut in the meantime, no less.

Oettinger stands at six-foot-five and 225 lbs, so he is certainly built like an NHL goaltender. But that doesn’t change the fact that he had no previous NHL experience before last week, and was thus a risky option for the Stars. The Stars’ first-round pick from the 2017 Draft has appeared in six games this season, going 2-0-3 and recording a 2.31 goals against average (GAA) and .910 save percentage (SV%).

Oettinger has experience on the big stage, so he’s no stranger to high-pressure situations. He played in both the U-18 and U-20 World Junior Championships, and played three seasons with Boston University in the NCAA. Last year with the Stars’ AHL affiliate Texas Stars, he played in 38 games for a 2.57 GAA and .917 SV%.

So, who was the rookie Oettinger’s backup during Khudobin’s absence? None other than the veteran of two NHL games, Landon Bow.

Bow, who has yet to play a game this season, has virtually zero NHL experience, and has been a member of the AHL Stars for the past four seasons. His numbers haven’t been great there, as he has posted two seasons of an over-3.00 GAA and sub-.900 SV%, blinking indicators of his not being ready to play at that level. Stars fans had every reason to fret with this inexperienced Oettinger-Bow duo in net.

Because of the lack of experience from the Stars’ goalie options after Khudobin right now, they were forced to come face-to-face with the glaring issue of their immediate goaltending depth. And with Ben Bishop being shelved until at least mid-March, that’s a reason to worry.

Speaking of Bishop, have you forgotten about him yet? Well, don’t. If it weren’t for a major surgery he had over the summer, we probably wouldn’t be having this conversation right now.

Bishop had dealt with a nagging knee injury for a period of time, and had surgery on his right knee to repair a torn meniscus. He began rehabbing his surgically-repaired knee late in December, general manager Jim Nill said. He is expected to be out “until sometime in March.”

Khudobin as the Starter is a Gamble

Now comes the ultimate worry for the Stars: what if Anton Khudobin fails to play like he did in their Stanley Cup run last year for too long before Bishop returns, and the season slips away from them?

While it’s unlikely he plays really poorly, it is possible he plays just average enough to land the Stars in some trouble.

Khudobin is now 34 years old, and has never really played a starter’s share of games in his career, except in the playoffs last year. If that stretch of games is any indication, then, we could actually expect him to play quite well.

So far this season, though, he is 3-3-1 through seven games played, and has a 2.75 GAA, .902 SV%, and a shutout. Those numbers aren’t anything to dismiss, but they are certainly nothing to gawk at, either.

Stars fans should hope for the best, and hopefully Khudobin can turn up his level of play and start improving his numbers to reflect the ones he put up in last year’s Cup run. If he doesn’t, the Stars will have a serious goaltending depth problem to address instead.