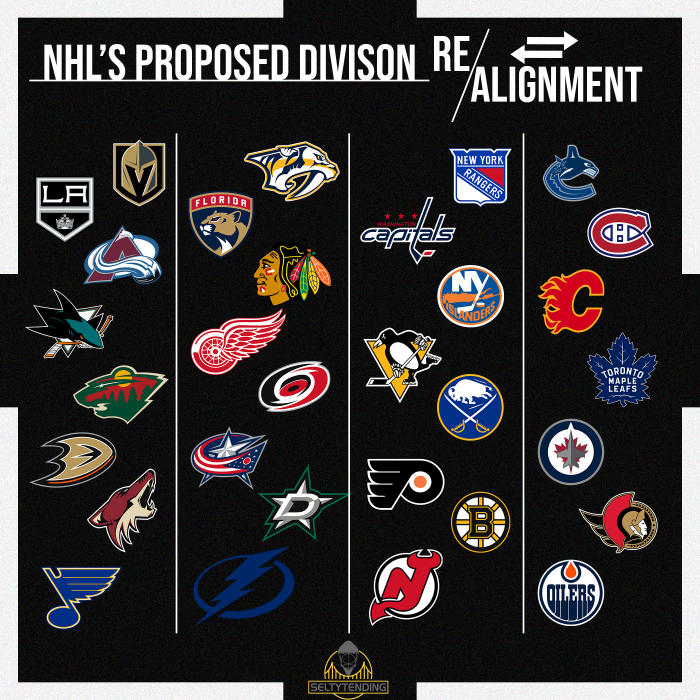 Okay, now it’s set in stone. For what seems like it was in limbo for months on end, I’m happy to be writing that the NHL and NHLPA have officially agreed upon terms for a 2020-21 NHL season. It’ll really just be a 2021 season, but the NHL is all about formalities when it comes to that stuff, so 2020-21 it is.

The biggest story, perhaps, other than the announcement of the season’s confirmation itself, is the temporary division realignment that was agreed upon between the league and the Players’ Association to remain in effect for (hopefully) just this season. But first, some details.

The NHL and NHLPA announced in conjunction that they had reached an agreement to play a shortened, 56-game season beginning January 13th, 2021. Every team in the league may begin their training camps on January 3rd, while the seven NHL teams who missed the expanded 24-team qualifiers and playoffs back in August are allowed to begin camp as early as December 31st.

It might seem like a small gesture to allow these teams just a few days’ advance over the rest of the clubs, but in an already-shortened training camp, those few days can make all the difference for seven teams who haven’t seen game action in around nine months now. Talk about shaking off the rust.

I’m sure that all of those details were painstakingly difficult to hammer out, as was made apparent by the stories that came out about players being upset with the previously proposed formats. But the important thing is that it got done, and we the fans are just weeks away from the return of NHL action.

Besides, those details seem minute propped up against the elephant in the room: the NHL has temporarily realigned its four divisions, giving every team a new challenge: play the same seven or eight teams at least seven or eight times, and do well enough to make the playoffs.

Rumors of realigned divisions had been circulating around the league and in the Hockey Twitterverse for weeks, and it was also reported that multiple teams complained about early propositions. Some changes were actually made, too, as the only thing top insiders all agreed upon was that the realignments were far from concrete, and subject to change.

Following a league Board of Governors conference call, TSN’s Pierre LeBrun, also of The Athletic, shared the agreed-upon realignment on Twitter.

LeBrun (@PierreVLeBrun) later gave the updated divisions when they had been finalized:

Believe there was only one switch from the divisions I relayed a few weeks ago. Dallas for Minn. So here’s how it would look, pending BOG approval (if Cdn teams can play in 🇨🇦):

The finalized, temporarily realigned NHL divisions for the 2020-21 season are as follows:

The glaring need for divisional realignment, it must be emphasized, was the uncertainty surrounding cross-border travel between the United States and Canada for purposes deemed non-essential. The Canadian government has continued to extend the ban against non-essential border crossings due to the ongoing surge and spread of COVID-19 in the U.S., whereas Canada has seen significantly less reported cases and deaths due to the novel coronavirus.

Therefore, divisional realignment looks to reduce travel (especially cross-border travel) as a safety measure, with consideration for the continued closure of the U.S.-Canadian border.

The likely solution was always an All-Canadian division, and that’s exactly what we got. The seven Canadian teams will not have to travel south of the border while the closure is still effective.

Placing all 31 NHL teams into new divisions was no easy task, especially since the necessity for an All-Canadian division became reality. Canadian NHL teams were in 3 of 4 of the league’s regular divisions, so significant shuffling was needed. That’s why teams like the Minnesota Wild ended up in the new West Division.

There has been no shortage of opinion on the new divisions, the shortened season, the validity of the playoffs and of the eventual Cup champions of the upcoming campaign, and all sorts of storylines accompanying this unprecedented NHL schedule. But if I had one thing to say about the job the NHL has done putting together this strange season, it would be this: Bravo.

Surprised? You shouldn’t be. Admittedly, I have been quite critical of certain things the league has done in the past, including barring NHL players from participating in the 2018 Winter Olympics in Pyeongchang, and their structuring and promotion of the NHL Global Series held in Europe a few years ago, to name just a few instances of my past critique.

But when it comes to the 2020-21 NHL season, and this year’s 24-team Return To Play plan including the Stanley Cup Qualifiers and the two-city bubble format, I think the league has done a remarkable job handling their business amid the COVID-19 pandemic, so much so that other professional sports leagues and businesses are taking note of the success story that is the NHL.

Shortening the season from 82 to 56 games was the right first move to take – focusing on completing this season to stay on track to hold a standard 2021-22 season is a smart thing to do. Holding shortened training camps and having Free Agency Frenzy and the 2020 Draft in the rearview so as to allow focus on this season with no boxes unchecked was a massive success. Further, the fact that the league has set a regular season start date weeks out is commendable, considering amendments had to be made in conjunction with the Players’ Association to a CBA that had just been signed a few months ago.

All signs pointed to another work stoppage in the NHL. All fans had flashbacks of the 2013 lockout season. But, like that season, this one will take place, only in a shortened fashion. The fact that any season at all is taking place is remarkable in and of itself.

While I hope that the division realignment doesn’t last for more than a season, I think it will be a great switch-up for this one. The potential of the matchups are incredible, especially in the All-Canadian division. Each team playing each other in their respective divisions seven or eight times just screams “playoff intensity” all season long. I, for one, am on board for that one hundred percent. And if your favorite team misses the playoffs or falls short in some other way this year, the next full season is right around the corner.

In what has been an unprecedented and unfamiliar time, the NHL has done their darnedest to ensure hockey fans have some kind of normalcy in their lives, and that gift has finally arrived in the form of the 2020-21 season. The anticipation has been killing me, and I cannot wait to be glued to my couch watching as much hockey as I possibly can.