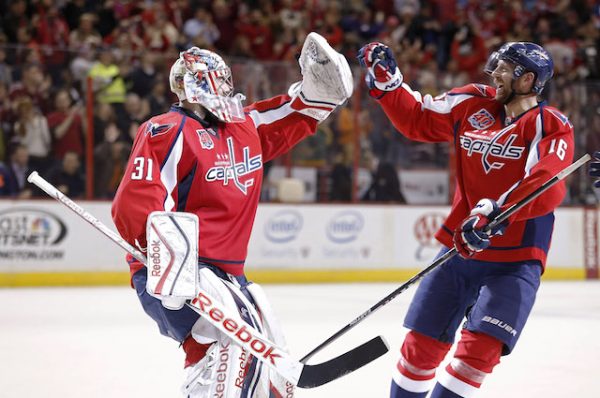 On Tuesday, Washington Capitals Head Coach Barry Trotz informed the media of his decision to go with goalie Philipp Grubauer over Braden Holtby for Game 1 of the playoffs against the Columbus Blue Jackets. Trotz said that he is comfortable with his decision for Thursday night’s game, but will evaluate it “game by game” after that. If history proves anything, this is a bad way to approach your goaltending situation going into the playoffs. Although Grubauer is fully capable of performing and winning games, this is still a mistake on the part of the Capitals’ coaching staff.

Longtime Washington Capitals starter Braden Holtby is sitting on the bench to start Game 1 for the Caps, after a season that saw him post the worst numbers of his entire eight-year career. In 54 GP this season, he went 34-16-4, with a 2.99 GAA and .907 SV%, his worst statistics since the 2013-14 season. Following a stretch of bad play in mid-February that saw him go 1-5-2, with a 4.82 GAA and .854 SV% in addition to being pulled on three occasions, Trotz turned to backup Philipp Grubauer for 10 of the Caps’ last 16 games to finish out the season.

There was talk around the league that there was debate in the Capitals locker room about who to start in net come playoff time, and that has only been proven with Barry Trotz’s decision to start Philipp Grubauer. It is not as if Grubauer hasn’t earned the opportunity; in 35 GP this season, 7 in relief of Holtby, he is 15-10-3, with a 2.35 GAA and .923 SV%, with 3 shutouts. He has also had the hot hand as of late, winning 7 of his last 10 starts, posting an impressive 2.31 GAA and .925 SV%.

So, the argument is not whether or not Philipp Grubauer is a capable goaltender. He is. The argument is whether turning his back on Braden Holtby to open a critical postseason for the Capitals is a smart move. It’s not. Here are the facts: Since the 2012 playoffs, Holtby has started 59 of 60 playoff games for the Caps (the other 1 game went to Grubauer). In those games, Holtby is 29-30 with a 2.00 GAA and .932 SV%. That save percentage is the second-highest in NHL history, among all goaltenders, ever. If anyone were to blame for Washington’s shortcomings in the playoffs, it shouldn’t be Holtby.

Granted, Braden Holtby has not had a characteristic campaign. The 2016 Vezina trophy winner struggled down the stretch to look like himself and made the conversation among the coaching staff easier as to which goalie would give them the best chance to win. However, as a goalie with his pedigree and veteran experience, he gives the Capitals more than Grubauer does, in different respects. And, if Trotz is going to evaluate the goalies on a game by game basis, he will self-sabotage the team’s playoff hopes. Inconsistency in net and uncertainty among the two most important players on the team is a recipe for disaster, and has been proven in the past to fail.

“We’re very fortunate that we have two really good goaltenders right now . . . I think that puts us in a real good spot.”

The catch of having “two good goalies” is that the Coach doesn’t actually know who to start. For example, Mike Sullivan, Head Coach of the back-to-back Pittsburgh Penguins, had two good goalies: Matt Murray and Marc-Andre Fleury. Still, Sullivan knew who he wanted to start. Even when Fleury took the Pens to the Eastern Conference Final due to an injured Murray, upon Murray’s return, Sullivan went right back to him, en route to a second Stanley Cup in as many years.

The fact is simple: Braden Holtby is one of the NHL’s best goalies. He has some of the most impressive playoff numbers among both active goaltenders and goaltenders all time, and is more suited for this type of game atmosphere than Grubauer, at least for the time being. It remains to be seen how the Capitals will fare this time around, but I predict that not starting Holtby out of the gates will come back to bite them.

The Washington Capitals take on the streaking Columbus Blue Jackets on Thursday night in Game 1 of their first round matchup, and look to Philipp Grubauer to steal them a win.