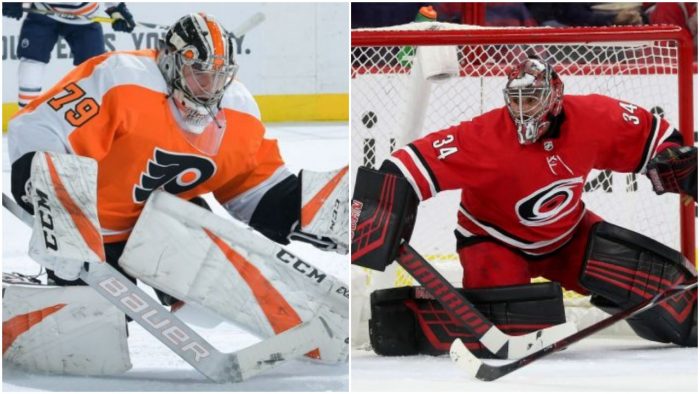 As all 31 NHL teams play out the rest of their exhibition games in preparation for the regular season, rosters are starting to take shape, and that includes between the pipes, too. That means it’s about time for my predictions for 3 goalies to “boom” and 3 goalies to “bust” in the 2019-20 NHL season. To revisit last year’s preseason predictions, click here. Enjoy!

Some might say that the two time Vezina Trophy-winning goaltender has already “boomed,” and can’t do so again. To those people, I say: wait and see. Bobrovsky earned himself a 7-year, $70-million contract with the Florida Panthers this offseason, coming off his first playoff series victory with the Columbus Blue Jackets, sweeping the President’s Trophy-winning Tampa Bay Lightning in the first round of the 2019 Stanley Cup Playoffs. Playing in the first year of a monster contract with a brand new team that carries a ton of potential has the 31-year old Bobrovsky poised to excel in the prime of his career and “boom” out of the gates to start the season.

Now that Carter Hart is the undisputed starter of the Philadelphia Flyers, the goalie carousel that they’ve had for so many years can finally be put to rest…right? I think so. Hart got a real taste of the NHL midway through the year last season, and I don’t see him going back to Lehigh Valley to play with the AHL’s Phantoms again, that is, if he can break out and build upon the success he had in his stint with the big club last year. Carter Hart is touted as one of the top goalie prospects to be drafted in years, and big things are expected of him. The crease is his now.

Last season was Robin Lehner’s breakout year – he surpassed all expectations in his first season with the New York Islanders, and led a team with a low bar to being a true Cup contender, even sweeping the Pittsburgh Penguins in a first-round playoff series win. Lehner won the Bill Masterton Memorial Trophy for overcoming and sharing his battle with alcoholism, bipolar disorder, and depression, and won the William M. Jennings Trophy, as well, for allowing the least amount of goals among all NHL goalies. I think Lehner, with his new team in Chicago, has a real chance to start for the Blackhawks and share time with Corey Crawford, and maybe even win the crease during the season.

While a trip to the Eastern Conference Finals on a team that no one thought could get there might seem like an inarguable accomplishment, I’m calling smoke and mirrors on the Hurricanes – and on Mrazek. Petr Mrazek has proven to be a streaky goaltender, and it showed in his statistics in his 11 playoff appearances for the ‘Canes, which included a sub-.900 SV%, with an .894. I expect Mrazek to have trouble keeping his role as starter this year, especially with a new challenger and former starter in James Reimer waiting on the bench.

How Mikko Koskinen ended up as the starting goaltender for the Edmonton Oilers is a bit of a mystery to me. How he ended up with a three-year contract extension at an AAV of $4.5-million is even more of a mystery. But, that was ex-GM Peter Chiarelli’s parting gift on his way out of Alberta. The way I see it, the Oilers simply haven’t done enough to bolster their roster and convince me that they are going to be in the running for a playoff spot this year, and a lot of that has to do with the fact that Koskinen is still their starting goalie, and Mike Smith is their backup. I think Koskinen is definitely a lock in the “bust” category this year.

I always feel the need to slip in a risky pick among the safe picks for this piece, and Stanley Cup Champion Jordan Binnington is the risky pick here. Despite putting up amazing numbers in his rookie season, both in the regular season and in the playoffs, I predict Binnington to be a “bust” this year. Not in the sense that he’s going to woefully underperform coming off winning the Cup, but in the sense that, much like other goalies who have had the same path as him, (see Cam Ward in 2006), I think it’s fully in the cards for a noticeable regression and sophomore slump to take place for the young stud. This could be my coldest take of the whole piece, or it could be the best. Again, wait and see.