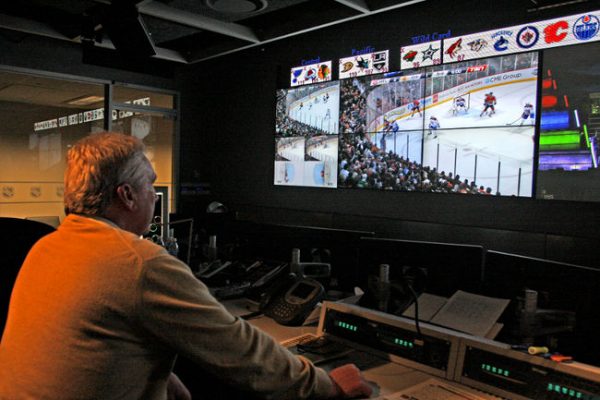 Sports are constantly being pushed forward and changed because of innovation in technology. Whether it is new equipment or statistic-tracking machines, new technology has the ability to dictate the play in-game, and is affecting the way fans experience sports in general. An example of this type of technology is currently being used by the company Pitchf/x, who “automate” the strike zone in baseball by using three cameras behind home plate.1 They use the cameras to track every pitch as accurately as possible to make the correct call on every play.2 This is not the only technology of its kind, as other gadgets for reviewing and officiating purposes are used in the NFL, NHL and more today.

The argument against technology such as goal line review in the NHL and automated reviews in the NFL is that they take away the “human component” of the game. That is, if everything is automated and computerized to a tee, a part of what makes the sport itself is lost and the sport is not as special as it was before. Technology can set a standard for how the game is played and what counts, etc., but this should not take precedence over the human component of the sport. Former MLB player Eric Byrnes, who works with Pitchf/x, said “There are many baseball traditionalists who think above 90% [accuracy] is good enough and they enjoy the ‘human element’ of the game.”3 Humans have been calling sports games and keeping track of everything for centuries, and 90% is probably a good number to go with for accuracy. 90% keeps the game exciting, while 99% would make it robotic and less interesting.

Automated technology is especially relevant to the NHL and hockey in general, as it could potentially offer up a quicker way of reviewing goals and offsides calls, effectively eliminating the lengthy coach’s challenges and overtime goal reviews, among other things. In today’s NHL, there are moments in games all throughout the regular season and especially in the playoffs when coaches will challenge a call to try and get it reversed, and it kills all momentum any one team had and all the energy of the fans in the crowd. Maybe for situations like this, or a sport like hockey in general, automation should be employed. Other sports, like baseball, maybe shouldn’t use this method for strikes and outs.

The human error component is vitally important to sports, because everybody makes them: players, coaches, referees, statisticians and analysts, and the likes. It is important because sports are played and run by humans who all coordinate to keep things smooth and make it work. If automation were a bigger part of the sport than people, it could be more accurate, yet it would take away a lot of excitement and emotion like player effort, skill, goals or points, which, depending on the fan, could be a good or a bad consequence.

If we begin to automate sports, record keeping and statistics would probably be simpler and more straightforward; however, it would probably take away the jobs of thousands of incredibly smart people in the industry. Record keeping would be simpler because computers can track a hundred statistics at once if they had to, all with pinpoint accuracy. It would be easier and more fair, however, as a statistician deeply invested in analytics myself, it is not something I want to see happen.

Sports is a complicated industry, in which employing new technology and automation comes with an entirely different reaction from every individual. Some like it and some do not, some think it is fair and innovative while others think it takes away from the human component of the game. The bottom-line is, however, that new technology which makes the game more accurate and fair is never going to stop being introduced. There are always going to be new ways of approaching a certain aspect of the game and, whether we like it or not, automation is here to stay.