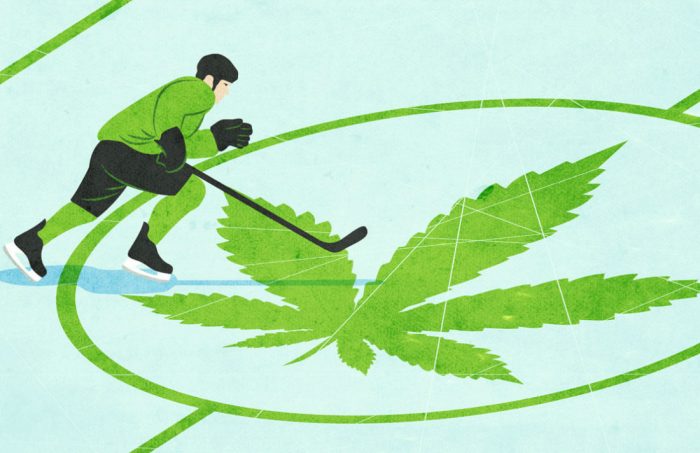 In March 2019, the NHL Alumni Association (NHLAA) entered into a landmark agreement with Canopy Growth Corp. and NEEKA Health Canada to explore cannabis-based neurological treatments for athletes, a first-of-its-kind partnership in the world of professional sports. This partnership will see studies be conducted to test the effects of the interaction between cannabidiol (CBD) and the brains of former NHL players living with post-concussion symptoms. Cannabis as a remedy for professional athletes carries unknown potential, which this partnership aims to discover, and which the NHLAA and Canopy Growth alike hope to develop in the near future.

As concussions and the wide-ranging effects of post-concussion symptoms have garnered more attention across the sport industry in recent years, the number of former professional athletes vocalizing their struggles with life after sports, and life after concussions, seems to continue to grow with each passing day. Athletes can develop an array of impairments from past concussions, ranging from depression, post-traumatic stress disorders (PTSD), and chronic traumatic encephalopathy (CTE), which has been loosely associated with progressive dementia early in one’s life.

In some cases, former athletes suffer from their post-concussion symptoms to the extent of experiencing limitations that debilitate their ability to cope with the environment around them. This often leads to erratic and uncharacteristic behavior, loss of memory, and in extreme states; suicide. NEEKA Health has defined this condition as “functional disintegration.”

This agreement has been called a “transformative clinical research partnership” by Canopy Growth, in that investigating the efficacy of cannabinoids as a treatment for post-concussion neurological diseases with the backing of an organization holding as much sway as the NHLAA is an unprecedented endeavor. NEEKA Health will test CBD-based therapies hoping to reduce the severity of post-concussion brain disorders in more than 100 former NHL players participating in the double-blind study.

Not to be confused with tetrahydrocannabinol (THC), the psychoactive component in the cannabis plant that induces a “high” in users, CBD is a non-psychoactive compound found in the plant that is shown to have many therapeutic benefits, including neuroprotective effects that can serve to protect a brain’s health.

Clinical studies already support CBD’s effectiveness in treating conditions such as epilepsy, multiple sclerosis, and in other areas such as chronic pain, anxiety, and Parkinson’s Disease. The Neurology Centre of Toronto holds the notion that “Medicinal cannabis may pose as an option for treating concussion-related chronic pain, specifically headaches.”

There is no denying the controversy in the use of a component of the cannabis plant for legitimate medical purposes, but that doubt can be dismissed with this study; research will be conducted by NEEKA Health Canada’s Dr. Amin Kassam, a world-renowned neurosurgeon, joined by fellow neurosurgeon Dr. Richard Rovin. The combined expertise of Drs. Kassam and Rovin brings the potential to improve the lives of patients suffering from the debilitating effects of post-concussion symptoms. Their experience includes extensive research in neuroscience, molecular brain signaling, brain mapping, and clinical trial design, the last of which aided in their ability to develop a novel method of testing for the more than 100 former NHL players.

Eighty of the 100 former NHL players will receive pills containing a CBD compound, and 20 will get a placebo. The players will then undergo a series of tests, including MRI brain scans, questionnaires, and tests using tablets to measure speech and writing patterns, memory and emotional state.

“This complex and multidimensional study will give us an unprecedented understanding of the interaction between cannabidiol (CBD) and the brains and behaviours of former NHL players living with post-concussion symptoms,” said Dr. Mark Ware, Chief Medical Officer of Canopy Growth. “We thank the members of the NHLAA whose willingness to join this unique research partnership speaks to the need for alternative medical treatments to treat the long-term and often devastating effects of concussions.”

Novel forms of treatment for post-concussion symptoms, such as digital mental health and behavioral therapy, have an immense, unexplored opportunity in cannabis-based remedies. One person who believes in the potential marriage of cannabinoids and post-concussion issues is Dr. Charles Tator, Founder of the Canadian Concussion Centre (CCC), the official choice donation partner of Headsup. Dr. Tator is “reasonably hopeful” that post-concussion symptoms can be treated with CBD and has plans to explore the role of CBD on treating post-concussion headaches in the future.

The potential of cannabis as a remedy in sports is no longer an uneducated suggestion, no longer a faraway possibility with no place in professional sports. Cannabis as a viable, effective remedy for post-concussion symptoms is approaching rapidly, and with the partnership between the NHLAA, Canopy Growth, and NEEKA Health, seems closer to becoming a reality than ever before.