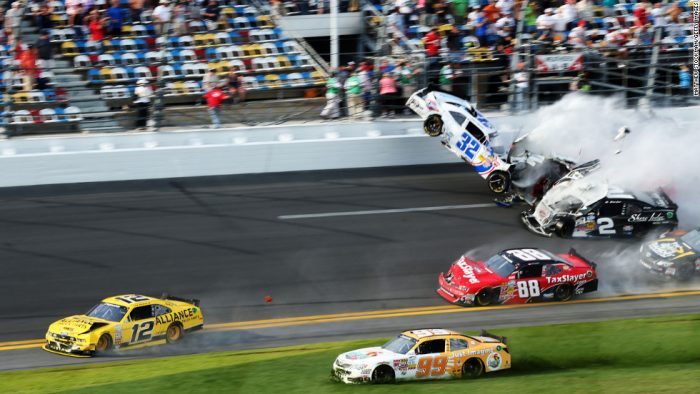 Head injuries in the sporting world have garnered significant attention over the past decade, with nearly all those involved in the sport industry now made aware of the damaging effects of concussions. However, it is almost assumed that these injuries are exclusive to high-velocity sports that entail constant hitting, such as hockey and football. The truth is that Traumatic Brain Injuries (TBIs) can occur in any sport, even those wherein contact is usually incidental – such as motor sports and cycling. Here’s a look at how two niche sports have evolved their concussion evaluation, prevention and return protocol.

Motor sport encompasses a wide variety of different leagues and vehicles, with different racing tracks and styles. Some of the more well-known motor sports are the National Association for Stock Car Auto Racing (NASCAR), Formula 1, the IndyCar Series, and Grand Prix motorcycle racing (MotoGP). Such an amount of differentiation between each sport and every race invites the possibility for incidental accidents, such as car crashes that can injure the drivers, pit crews, and even spectators.

While fully aware of the possibility of dangerous crashes and even fatalities on the race track, one might ask, “Just how prevalent are TBIs and concussion in motor sport?”

Over the past few decades, the incidence of severe traumatic brain injuries in motor sports has actually seen a significant decrease in prevalence, and a shift toward mild traumatic brain injuries (mTBIs), and concussions. The decrease in severity of head injuries can be attributed partly to recent advances in protective equipment, both for the drivers and the racing environment itself, including soft barriers lining the track.

A nine-year retrospective study from Victoria, Australia, with adjustment for national sports participation figures, showed that motor sport was attributed the highest rate of concussion for reported hospital attendances for that type of injury. The study identified 4745 cases of sports-related concussion, with motor sport accounting for a surprising 14% of that number (n=674), third behind only Australian Rules Football and cycling.

On the North American motor sport spectrum, a retrospective analysis of all NASCAR impact data from the 2002-2008 race seasons found that head injuries occurred in 27 of 274 impacts selected for the study, accounting for 9.9% of those impacts. This data is difficult to interpret, partially because it remains the only published information of its kind for this type of racing series.

The small amount of data pertaining to head injuries in motor sports hasn’t deterred the movers and shakers of the different leagues and events to take action, however.

Based on concussion evaluation, prevention, trackside concussion tests, and return-to-race protocol, the argument can be made that motor sports actually have some of the best pieces in place to protect their competitors out of all sports.

Neurologist Christopher Prusinski says there is currently no reliable trackside test for concussions in motor sports. He says a field sobriety test might betray loss of balance and coordination, and since concussion symptoms can sometimes take an hour or more to present themselves, this kind of test might not be definitive, anyway. His advice: After a crash, despite the level of damage to the car, stay in the pits.

A driver can self-monitor for concussion symptoms, says Dr. Prusinski, by looking out for headache, nausea and fogginess, and sensitivity to light or sound. Dr. Prusinski also recommends that in addition to self-monitoring, drivers should park their car, find a physician in the paddock, and ask for evaluation. The physician can then monitor the driver for outward signs of concussion, such as slurred speech and a vacant stare. They can also ask specific questions to prod for retrograde amnesia, such as “Which lap were you on?” or “What’s the last car you passed?”

SCAT3 remains the best trackside concussion test currently available. It’s available for free online, and can be printed off as a PDF. It tests for problems with memory, balance, and coordination. Dr. Prusinski recommends competitors adding this test to their track bags.

Also similar to high-velocity sports like hockey and football, NASCAR and IndyCar mandates pro drivers to take a baseline neurocognitive test at the beginning of the season, the Immediate Post-Concussion Assessment and Cognitive Testing, or ImPACT. In addition to testing for memory, reaction time, processing speed, and concentration, it also records the injury history of the driver, and any possible preexisting mental health conditions. Neuropsychologist Kenneth Podell, who helped design the ImPACT test, says that the best appraoch to evaluating for concussion is to compare athletes to themselves before an injury; that way, determining when it’s safe for them to return to competition is made easier.

Dr. Prusinski makes one more interesting recommendation for competitors of motor sport: practice prevention methods before racing. Dr. Prusinski says that performing neck workouts can help prevent concussions, as every pound of increased neck strength decreases concussion risk by 5%. Formula 1 drivers have already practiced this for years with specialized strengthening devices. Additionally, competitors should up their fluid intake at the track, because dehydration affects memory and attention. He recommends sports drink intake, too, since electrolytes play an important role in brain function. Putting all this into practice could very well help prevent a head injury for a driver.

One of the reasons that people involved in motor sports take head injuries and return-to-race protocol so seriously is because competitors are in control of high-speed vehicles that pose a threat not only to themselves, but to other drivers, and even spectators. In other sports, the high-risk effects of concussion are usually limited to the individual. In motor sports, it’s the opposite. That’s why return-to-race decisions are carefully conducted by all involved and treated with vital importance.

Car and motorcycle racing aren’t the only niche sport that have surprisingly high levels of mTBIs and concussions. As mentioned above in the retrospective study form Victoria, Australia, cycling accounted for the highest number of cases of sports-related concussion. This would be surprising to most, since cycling is typically thought of as a non-contact sport with little danger of incidental accidents.

The majority of injuries in cycling tend to be soft tissue damage, abrasions, lacerations, and bone fractures, all injuries one would typically associate with the sport. However, there has been an increasing number of head injuries – notably concussion – being reported by professional road cyclists.

The biggest roadblock in preventing, evaluating, and treating cyclists for concussion is the lack of established protocol in cycling when a suspected concussion happens. Nobody is at fault for this, though – in outdoor cycling events, having a set protocol in place simply isn’t possible. Since the camera usually follows the lead group of cyclists, most incidents are challenging to spot, and assessment can typically only be applied on an “opportunistic basis” rather than a structured one that would see the removal of the competitor, like in many team sports.

A “multiview approach” would be required to perform roadside assessments for every incident, ideally deploying eyewitness observers all along the course to relay information to clinicians to evaluate a rider for concussion. And even this would only be feasible for nationally televised events, not at the sub-elite level where cameras are scarce or nonexistent.

One of the first national governing bodies to establish a formal educational package on concussions is Cycling Canada. Their educational package informs riders of the different signs and symptoms associated with concussions, and offers advice for managing and rehabilitating after sustaining one. This is a positive step in the right direction for Cycling Canada and the sport of cycling as a whole, but much remains to be done in helping cyclists get the best treatment for head injuries.

Both motor sports and cycling have made significant strides in the past decade in educating their competitors about the signs and symptoms of concussions, and attempting to put the correct pieces in place to protect them. Although both are totally different types of sports than hockey and football, the efforts of each mirror the return-to-play protocols of the NHL and NFL pretty closely.

In the NHL, league return-to-play protocol dictates that any player who is diagnosed with a concussion is not able to return to practice or a game on the same day the event occurred, no matter how severe the concussion seemed to have been or how quickly the concussion symptoms were to wear off. Players then have to report to a club physician to retake their neurocognitive baseline test, followed by an evaluation by the club consulting neuropsychologist. There is no mandatory period of time a player has to be withheld from play, as the return-to-play decision is based on the individual circumstances of that player, and the decision is ultimately made by the club physician.

In the NFL, league return-to-play protocol dictates that when sustaining a concussion, a player must rest “until his signs and symptoms and neurologic examination, including cognitive and balance tests, return to baseline status.” Similar to the NHL, the player isn’t allowed to practice or play in a game, as they are not permitted to physically push themselves beyond stretching and working on their balance.

Motor sports and cycling are prime examples that TBIs and concussions exist outside of traditional contact sports, and educational programs including prevention and treatment methods are of ultimate importance in helping to properly diagnose and rehabilitate those who sustain them. It wouldn’t be surprising in the coming years to see professional sports leagues and committees collaborate on the best practices of concussion treatment and prevention, finding the best ways to care for their athletes.

This article was written for HeadsupCAN, a social purpose brand creating a concussion advocacy network across Canada. To learn more about HeadsupCAN, visit their site at https://www.headsupcan.ca/. To keep up with the organization, follow HeadsupCAN on social media, on Facebook (HeadsupCan), on Instagram and Twitter (@headsupcan), and on Youtube (Headsupcan.tv).

All other images courtesy of HeadsupCAN.