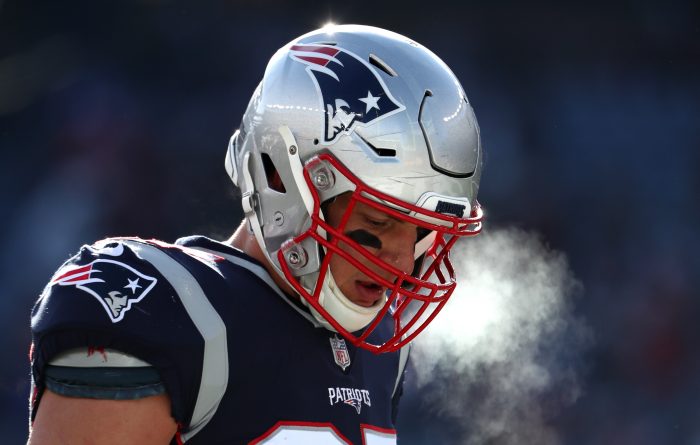 Ever since the National Football League reached a settlement in its lawsuit with thousands of former players, a precedent-setting $1-billion payout taking effect in 2017, more and more players have chosen to speak out about their own personal experiences with head injuries while playing in the NFL. This 2019 season has seen a number of retired players share their takes on the issue, namely former New England Patriots tight end Rob Gronkowski, a potential future Pro Football Hall of Fame candidate, and former Detroit Lions star wide receiver Calvin Johnson.

The uptick in player testimonials comes amid a flurry of controversial hits to the head this season, the worst of which was committed by Oakland Raiders outside linebacker Vontaze Burfict, who conducted a scary headshot to Indianapolis Colts tight end Jack Doyle. Burfict was subsequently issued a season-long suspension, the longest in NFL history, due in large part to his repeated offenses of violent hits.

Gronkowski and Johnson both opened up about their experiences suffering concussions in the sport, however, the approach of their arguments came from slightly different angles.

Gronkowski was part of the Patriots team that won Super Bowl LIII last season, and not even a year after retirement, has flirted with the idea of a comeback as soon as this season’s playoffs. The idea of a comeback, though, is a scary thought for Gronk – especially after he detailed the extent of his concussion history.

Gronkowski noted in an interview with NBC News that he had had “nine surgeries, probably had twenty concussions,” a few of which were so bad that he lost consciousness.

“No lie. I remember five blackout ones,” said Gronkowski. “I felt my head, I used to have liquid . . . It used to be thick, like, my head used to be thicker, like a centimeter of liquid in some spots, and you feel it. I’d be like, ‘What the heck?’ You could put indents in my head, but now, finally, I’m getting the right treatments and doing the right things.”

Getting the right treatments and doing the right things is what Gronkowski claims has helped him “fix” his concussions. In a back-and-forth Twitter exchange with a renowned doctor, Gronk told him that CTE is, indeed, “fixable.”

The involved doctor is Chris Nowinski, Co-Founder of the Concussion Legacy Foundation (CLF) and Boston University’s Center for the Study of Traumatic Encephalopathy, and a leading researcher of CTE. In his studies, Nowinski has found that 99% of brains obtained from NFL players have had CTE.

It’s new research like Nowinski’s that has led to a deeper understanding of illnesses such as CTE, as well as league-wide changes in on-field rules, and helmet redesigns. While these changes assuredly help in attempting to prevent head injuries, a game like football that involves hitting on every play is still bound to result in a good number of players getting hit in the head, even accidentally.

For someone who played as many games as Gronkowski, this can lead to several concussions – and after your first concussion, it becomes easier to suffer another and the symptoms only get worse over time.

“Concussions are fixable in the short-term in that typically after time the immediate symptoms, such as light sensitivity, go away. But CTE is caused by repetitive head trauma and over time it results in memory loss, confusion, impaired judgment, impulse control problems, aggression, depression, suicidality, parkinsonism, and eventually progressive dementia.”

Nowinski stated both on Twitter and in interview appearances something that even Gronk himself agreed with: while one can take measures to ease the symptoms of concussion in the present, it’s still unknown whether future illnesses can be prevented as a result of traumatic brain injuries. And since CTE is still limited to posthumous diagnosis, there’s no way of knowing what currently helps, and what doesn’t.

Rob Gronkowski certainly isn’t the only NFL player who has suffered a traumatic brain injury. One other player who spoke out is former Detroit Lion Calvin Johnson.

“Bam, hit the ground real hard. I’m seeing stars; I can’t see straight,” said Calvin Johnson in an interview with Sports Illustrated. “But I know in a couple minutes I’m going to be fine. Because I’ve done that plenty of times before.”

The former three-time all-pro wide receiver conservatively estimated that during his nine-year NFL career, he suffered at least nine concussions. Johnson also admits to considering leaving football a year earlier than he did, because of the constant pain he endured. In the end, he wasn’t certain that was the right thing for him to do – so he came back for one more year.

Out of his estimated nine concussions, Johnson claims that the Lions asked him to change his story about at least one, in a 2012 game against the NFC North division rival Minnesota Vikings. In this instance, Johnson suffered the concussion in-game, cleared protocol, reentered, and finished the game.

“I knew I was concussed because I blacked out. I wasn’t seeing straight . . . And they wanted me to change my story,” said Johnson.

Johnson says that after sustaining concussions, he “had his choice” of drugs to deal with the pain; according to him, all manner of narcotics were available in the training room. Johnson, however, chose to opt for smoking marijuana after games instead.

After retiring from the NFL, the Lions asked Johnson to hand back $1.6-million, a prorated portion of his contract’s signing bonus. The organization was fully entitled to do this, but Johnson called it “petty” after giving years of his time to the team. He also said there was a “very strong possibility” he would have kept playing if Detroit was successful on the field.

Player testimonials like those of Rob Gronkowski and Calvin Johnson carry significant importance in NFL discussion, as the aforementioned $1-billion lawsuit settlement is constantly being talked about by those inside and outside the league.

The settlement offers monetary coverage for 4 types of illnesses: Alzheimer’s, Parkinson’s, amyotrophic lateral sclerosis (ALS), and dementia. This is significant, because the NFL expects 6,000 of nearly 20,000 retired players to suffer from Alzheimer’s disease or moderate dementia someday. The approved settlement would pay players about $190,000 on average, while awards could reach $1-million to $5-million for those diagnosed in their 30s and 40s with Parkinson’s disease or Lou Gehrig’s disease, or for deaths involving chronic brain trauma.

The NFL recently planned an appeal to remove dementia claims in the lawsuit, those proving to be the most common and costly to date. The original plan was for a $765-million ceiling, but they agreed to remove that number as a cap.

It was originally designed to pay that amount over 65 years to nearly 20,000 former players, yet administrators have already approved more than $600-million in claims, and paid out nearly $425-million in just the first two years. They hadn’t originally expected to pay out that amount until at least a decade had passed.

NFL stars like Rob Gronkowski and Calvin Johnson speaking up about their experiences with concussions is significant, because former players are the biggest catalysts and most important voices in the game, especially on the issue of concussions. If more and more players speak up about their experiences, it will lead to more productive discussions, and better compensation for traumatic injuries during their careers and after retirement.