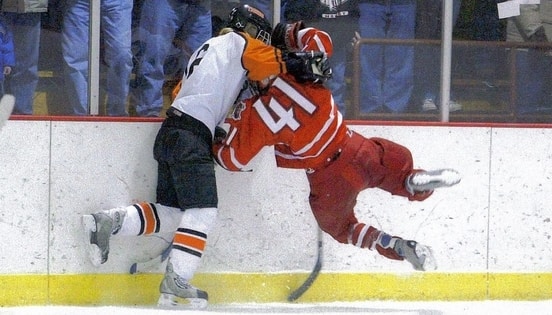 Concussions and the consequences that follow have only come to light in the sports world relatively recently. The NFL, NHL and other major leagues for contact sports have been under fire with lawsuits from former players and their families, as well as player unions. The lawsuits condemn the negligent standard of care the leagues have for their players, an example being the NFL’s improper handling of on-field concussions and the brain trauma that results.1 Former players and their families believe this is the cause of many problems that players have after they retire.

Former NFL player Dave Duerson committed suicide in 2011 after experiencing symptoms of dementia, shooting himself in the chest so his brain could be studied.2 His brain showed that he had Stage 3 CTE, a degenerative brain disease often caused by concussions.3 The team that studied his brain also found in another study that “[in] 79 brains of former football players . . . 76 showed signs of CTE”.4 Chris Nowinski, the head of these studies, says that due to the correlation between contact sports and concussions, he believes children shouldn’t be allowed to play such sports before high school.5

My personal opinion on balancing the risks of concussion with the valuable lessons kids learn from sports, plus the enjoyment they get out of it, has changed, and continues to change the more I learn. I grew up playing hockey, lacrosse and other sports and played them up until college. Over the course of my years on the ice, I sustained four concussions. The last one caused me to forget most of the day I got it on and was the end of my playing career. So, I realize the effects concussions can have, not just on the ice, but off of it as well. My little brother still plays hockey and has the potential to play at a high level through college. I’m proud of him, but admittedly, I’m also scared for him as well. He’s already had two concussions himself.

I don’t think it is reasonable to stop kids from playing hockey, football and other potentially risky sports until high school, but I do think that some reform within each respective sport needs to take place as far as education, protection, liability and responsibility go. I for one never reported my concussions because my hockey league and coaches would have restricted me from playing. I was scared of not getting ice time when I should have been scared for my own health. A new mindset where talking and being honest about concussions and injuries in general needs to be implemented in order for kids to safely continue to play youth sports, along with reformed rules and safety regulations. Only then would I let my kid get on the ice or on the field and not be scared for their life down the road.