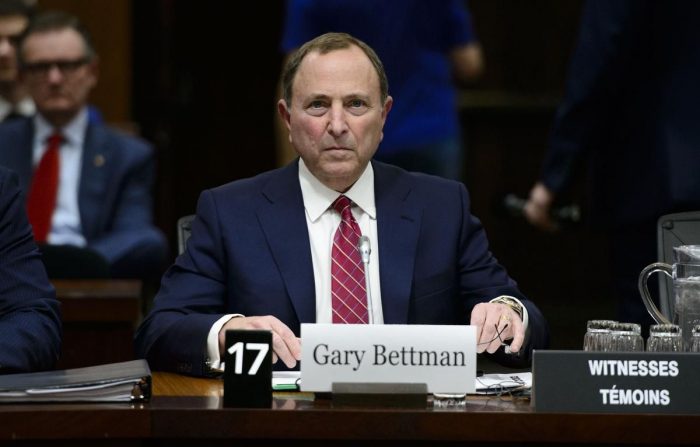 In 2018, the Canadian House of Commons Standing Committee on Health adopted a motion establishing the Subcommittee on Sports-Related Concussions in Canada. For the announcement of the study directly from the Canadian Parliament website, click here to read the official press release. The subcommittee has heard testimonies from a breadth of individuals spanning all levels of involvement in sport, professional or otherwise, to see what steps can be taken on a national scale to make sport safer. Among the individuals who made an appearance before the subcommittee was the Commissioner of the National Hockey League, Gary Bettman.

In his 25+ years as NHL Commissioner, Gary Bettman has become a master of rhetoric on sensitive topics, especially the recent surge of concussion and traumatic brain injury-related conversation, which was expectedly the theme of his testimony.

Accompanied by Deputy Commissioner Bill Daly, Bettman opened his testimony by touching on a number of talking points supporting the efforts of the NHL to make the game of hockey safer during his tenure. Bettman highlighted that the NHL was the first league to introduce mandatory neurological baseline testing for players, in 1997. He also notes they were the first professional sport governance to adopt a league-wide electronic medical records system.

While both of these can be attributed as considerable achievements for the league, neither has come without criticism, especially the neurological baseline test, which some players have admitted to purposely “bombing” before the season so they can easily pass it again if they sustained a possible concussion.

Bettman’s testimony was comprised of a number of issues people have with NHL concussion protocol from the outside looking in, namely the concussion spotter system, return to play protocols, hits to the head, and fighting.

What’s interesting is the NHL does not identify their concussion spotters. When asked by TSN Correspondent Rick Westhead why the league neglects to do this, even though it would add “transparency, credibility, [and] accountability” to the program, Bettman deflected by saying “Let me take some other questions.”

In regards to the NHL’s return to play protocols, which have been increasingly scrutinized, Bettman admits that individual team doctors have the ability to clear players to return to games. This has drawn concern from at least one team doctor, who suspects that “situational ethics” is sometimes employed to clear a player to return to the game.

Bill Daly defended current protocol by mentioning that players who are slow to get up off the ice after colliding with the end boards or with rink glass are required to be removed from games for medical evaluation.

Areas that Bettman and the rest of the NHL front office brass seem to remain stalwart in are hits to the head, and fighting. Any suggestion of penalizing all hits to the head and removing fighting from the game are met with a recurring rebuttal: It’s just not possible.

Hall of Fame goaltender of the Montreal Canadiens and former Member of Parliament Ken Dryden has lobbied the NHL to penalize all hits to the head, which Bettman has called undoable, if hockey “is to be maintained as a physical, contact sport.”

Penalizing all hits to the head would not take the physicality nor the contact out of hockey, but would more likely serve to ward off any potentially dangerous, “50-50” hits a player is thinking about making. Granted, this would not prevent concussions entirely, as players can sustain a brain injury just as well from a shoulder-to-shoulder hit or a blow to the chest if their head jerks back suddenly on the follow-through.

Getting rid of hits to the head, though, is unarguably a good starting point for protecting player health.

Much like hits to the head, Bettman seems to think the players can police the issue of fighting in the game without league intervention:

Bettman went on to say that 85% of games during the 2018-19 NHL season were fight free, the highest percent since 1964-65. He also noted that over the past five years, players averaged 2.6 concussions per year because of fighting, so he was glad to see the reduction in fighting this year.

MP Doug Eyolfson condemns fighting in NHL games altogether, and had this to say about the numbers Bettman used:

“If 15% of games have fighting, that’s 15% too many. This is an act that is a criminal act in any other setting. This could be removed from NHL hockey with the stroke of a pen.”

“People believe [fighting is] an important thermostat,” said Bettman. He believes that the threat of fighting ensures a certain level of conduct on the ice.

While the threat of fighting may encourage some players to play a cleaner game and avoid fighting at all costs, the fact is that fighting is still happening in the league. A player who engages in even just a single fight over the course of their career could potentially suffer lifelong effects.

The longstanding “elephant in the room” for Bettman and the NHL surrounding concussions and TBIs is the neurodegenerative disease Chronic Traumatic Encephalopathy, or CTE. Bettman has long denied any conclusive determinations that CTE is a direct consequence of concussions, and staunchly defended that position once again.

“I don’t believe there has been, based on everything I’ve been told — and if anybody has information to the contrary, we’d be happy to hear it — other than some anecdotal evidence, there has not been that conclusive link.”

Liberal MP James Maloney responded that “You don’t need to be a doctor to know that repeated blows to the head are likely to cause long term brain damage.”

The subject of former players suffering from CTE, diagnosed posthumously in the bodies of several deceased NHL alumni, is fresh in the minds of the hockey community, amid the recent class-action lawsuit of retired NHL players against the league.

The class-action suit was denied, and the players settled with the league for $18.9-million. Conversely, the NFL suit five years prior settled for $1-billion.

The settlement reached entailed a cash payment of $22,000 per player, plus an additional $75,000 medical deductible for players who tested positive on two or more neurological tests. Monetary payments don’t change; that is, they are consistent for all players, not differentiating someone suffering from migraines and someone suffering from dementia, depression and early onset Alzheimer’s. The NHL did not admit fault or wrongdoing.

One former NHL player involved in the lawsuit who denied the settlement money and has been as outspoken as anyone on the issue is Dan Carcillo. Carcillo argues that his plight and the plight of former players is not one of money, but of health and safety.

“I’m not settling. I don’t care if they give guys US$1-million each. This has nothing to do with money for me . . . You don’t actually own the results to the [neurological] tests that they see because they don’t want you going to the media and they don’t want parents to know the risks of playing hockey.”

Carcillo has been criticized by members of the hockey community for his moral campaign against the NHL on the topic of concussions and negligence to inform their players about the health risks of playing the game, but maintains his goals as simply trying to shed light on the human aspects of the industry.

“People get it a little bit twisted. They think that I want to change the game of hockey. I have opinions because I played hockey, but to be honest, I’m trying to humanize this issue across all sports and different athletes.”

Carcillo has called both the NHL and Gary Bettman “very unpredictable,” saying he could realistically see this case “drag out for another three, four years.”

Bettman was asked by a number of MPs if there were any rules or changes he would make to the game of hockey to reduce head contact, to which he replied “Right now, I don’t believe there’s much we can do.”

Episode 50 of Puck SKLS! It’s a milestone episode for Selty, Kok, and Lammers. Join the boys to recap Phase 2 of the NHL Draft Lottery, review the biggest surprises and disappointments of the Stanley Cup Qualifiers, and preview their playoff brackets for the 16-team Stanley Cup Playoffs. Presented by Pure Hockey.