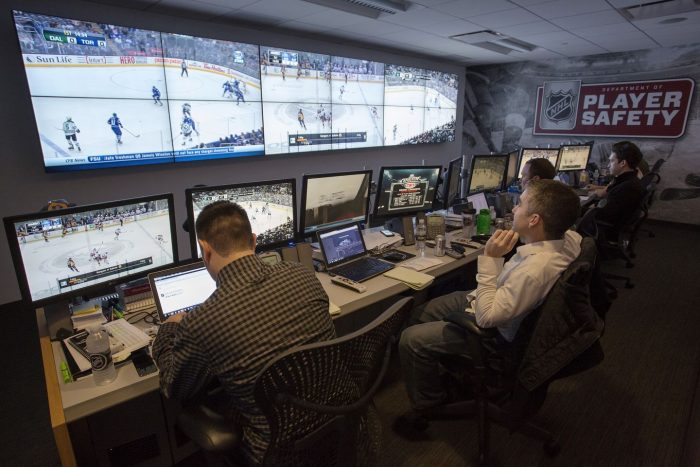 The past decade has seen major strides made in concussion awareness, treatment and prevention in the sport industry. It was not until relatively recently that people started to research and learn about the symptoms and consequences sustaining concussions can have on one’s health. Two of the highest velocity contact sports, hockey and football, have been forced to react to the growing medical concern about the hard-hitting sports, and have taken significant steps toward creating systems to protect their players on and off the ice and field.

The NFL was the first to implement an injury video review system, and it was ultimately born of necessity. In December 2011, the league instituted a system after Cleveland Browns quarterback Colt McCoy was sent back into a game after taking a hard, helmet-to-helmet hit. McCoy was diagnosed with a concussion after the game. The Browns’ medical staff said that they didn’t see the hit, since they were busy tending to other players who had been hurt, and that no one alerted them of the hit. They said that someone else should be watching the games at all times, so these types of incidents don’t go unseen.

Within two weeks after Cleveland’s medical staff made their concerns aware, the NFL had independent certified athletic trainers (called ATC spotters) in stadium booths at every single NFL game to be an extra set of eyes on the play. A video component was added shortly thereafter, in time for the wild card playoff games on January 7th and 8th, 2012.

The NHL took a bit longer than the NFL to design and implement a concussion spotting system of their own, but they have caught up nicely, and today have a sound system in place. At the start of the 2015-16 season, concussion spotting was a club-level responsibility, and the league did not enforce its concussion protocol to be followed to the same extent by every team. Changes were made ahead of the 2016-17 season the following year, and the current system has been in place since then.

That season, the NHL updated their concussion protocol, and implemented a centralized spotter staff to detect visible signs of concussion, and mandate removal from games if need be. This was agreed upon by the NHL in conjunction with the NHL Players’ Association (NHLPA). The updated protocol agreed to provide teams with additional support in helping to identify players who might require evaluation under league protocol, and that help comes in the form of Central League Spotters, who monitor all games from the Player Safety Room in New York City at the league office.

These “central league spotters” are authorized to require a player’s removal from play in order to undergo evaluation for concussion if that player exhibits “certain visible signs” specified under the protocol following a direct, or indirect, blow to the head. However, it still remains the responsibility of each individual club to identify a player who requires removal from play and might need to be evaluated for possible concussion.

According to the league, specified sanctions “will be” imposed on clubs that violate concussion protocol, which includes fines for first offenses, and increasing fines for further offenses.

One of the criticisms so far about the NHL’s concussion spotter system is its lack of transparency. Despite asking for more transparency about who the spotters are, what credentials they hold, and what “certain visible signs” they are looking for, all the general public really knows is that the spotters are certified athletic trainers or therapists who presumably know what signs to look for.

The NHL has every reason to not release the identities of the central league spotters, considering players who have been removed from games and not diagnosed with a concussion have already voiced their displease with them, and it is probably safer if they stay hidden. The least they could do, though, is more specifically outline the credentials of the spotters and the details of the system, like the NFL has done.

All ATC spotters assigned and retained by the NFL must meet a specific list of criteria. ATC spotters must: maintain a current certification by the NATA BOC, have an undergraduate degree from a four-year program, have a minimum of 10 years’ experience as an ATC, have significant college and/or professional sports experience, have no paid full-time or part-time employment with any NFL team in at least the past 5 years, and cannot cover a game involving a team for which the spotter has had previous full-time employment.

If there’s one thing the NFL has done right, it’s attempting to make the credentials for its ATC spotters as certified as possible, and making sure that the spotters it retains are as impartial to the teams and to the sport as possible, focused solely on the health of the players and alerting teams of potential injuries.

When reviewing an injury, ATC spotters employed by the NFL can directly contact a team’s bench, and must speak directly to the team physician, an unaffiliated neurotrauma consultant, or the head athletic trainer. These individuals are not allowed to relay the information to other team staff assigned to answer the bench phones. ATC spotters do not diagnose any injuries or suggest treatment, but simply notify a team’s medical staff about any potential injury.

In 2015, ATC spotters were given the power to use a “medical timeout” in a game, which would stop the game and have a player removed for medical examination. There are only two instances of “clear visual evidence,” however, in which a spotter can stop play. First, for “a player who displays obvious signs of disorientation or is clearly unstable,” and second, “if it becomes apparent that the player is attempting to remain in the game and not be attended to by the club’s medical or athletic training staff.”

If these circumstances are met, ATC spotters are allowed to proceed with following steps that allow them to communicate with officials, the team’s medical staff, and to administer medical attention to the involved player or players. When this happens, the officials will immediately stop the game, the involved player(s) will undergo medical evaluation, and their eligibility to return to the game will be decided within a specific frame of time.

While the protocol is clearly and concisely laid out for all to see, the question arises: How many times have we actually seen this happen in an NFL game? How many times has the game been stopped at the order of an ATC spotter, and subsequently the officials, and not allowed to resume until a full medical examination has been performed on a player or players involved in a potential concussion-inducing hit? Most fans probably wouldn’t be able to recall an instance of this…well, ever.

With the NHL’s lack of transparency about their central league spotters and their concussion protocol system, and the NFL’s usage of their outlined protocol, fans must ask: Are the systems in place now truly effective, truly impartial? Or do we still have a long way to go until we’ve achieved that status, and protected the interest and well-being of the players?

This article was written for HeadsupCAN, a social purpose brand creating a concussion advocacy network across Canada. To learn more about HeadsupCAN, visit their site at https://www.headsupcan.ca/. To keep up with the organization, follow HeadsupCAN on social media, on Facebook (HeadsupCan), on Instagram and Twitter (@headsupcan), and on Youtube (Headsupcan.tv).

All other images courtesy of HeadsupCAN.