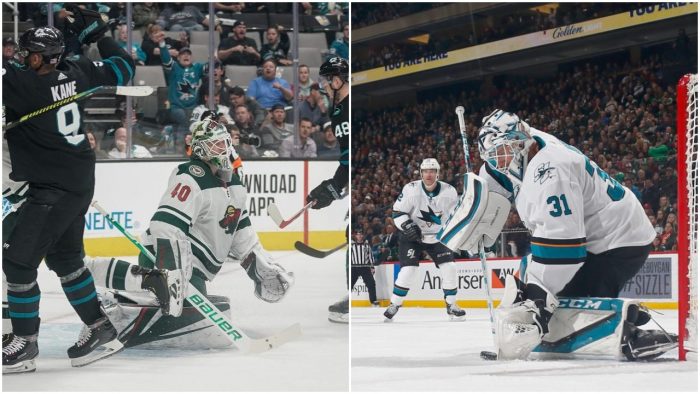 In what was a whirlwind free agency period for goalies across the NHL, the oft-quiet San Jose Sharks (at least when it comes to NHL Free Agency) joined in on the craziness for a change, and acquired goaltender Devan Dubnyk from the Minnesota Wild in a trade, letting go of incumbent backup Aaron Dell and adding some competition in the crease for current starter Martin Jones. Now equipped with two starting goalies who have undergone recent struggles looking to rebound and make a veteran Sharks team competitive next year, what will be the dynamic between Martin Jones and Devan Dubnyk in San Jose?

Before we get to the real meat and potatoes of seeing how Jones and Dubnyk stack up next to each other, let’s review how the two ended up side-by-side.

On October 5th, the Wild traded Devan Dubnyk to the Sharks in exchange for a fifth-round pick in 2022. This wasn’t the only trade between the two teams; the Wild later sent forward Ryan Donato to the Sharks for another draft pick, this one a third-rounder in 2021. San Jose neglected to re-sign backup goaltender Aaron Dell, and decided to move forward with a Jones-Dubnyk tandem. Or is it a Dubnyk-Jones tandem?

A first-round pick of the Edmonton Oilers in 2004, it took the 34-year old Dubnyk a number of years to really live up to his potential. But after being shipped out of Edmonton, keeping his suitcase packed for short trips to a couple different NHL teams, and even playing a short stint in the AHL, Dubnyk finally had his chance to shine – and nailed it – when being traded to the Minnesota Wild.

In the latter stages of the 2014-15 NHL season, Devan Dubnyk was introduced to Wild fans as the new starter, and he absolutely stole the show. He had career best goals against average and save percentage marks (1.78 GAA, .936 SV% in 39 games played), which still stand as his best today. He also helped the team advance to the second round of the playoffs in 2015, which is the furthest they have gone in the past decade.

The Wild would remain competitive for as long as Dubnyk was in Minnesota, and Dubnyk would win a career high 40 games in 2016-17. The Wild would qualify for the Stanley Cup Playoffs in four of five seasons, missing only in 2018-19. However, they never did make it past the first round again.

Dubnyk carries a respectable stat line on his career. He has played 520 games between his NHL teams, and has 247 wins to his name. His 2.58 GAA, .915 SV%, and 32 shutouts stand out positively considering the poor rosters he has been a part of over the years (cough, cough, Oilers).

Martin Jones came to the San Jose Sharks in the 2015-16 season from the Los Angeles Kings after being flipped by the Boston Bruins, as a successor to five-year starter Antti Niemi, and after the only season in which the Sharks had missed the playoffs since 2003. That is, until the 2019-20 season.

The undrafted 30-year old goalie has had a major impact as far as undrafted players go. And although he’s had his struggles of late, you really can’t pick many undrafted players who have had the sort of immediate impact that Jones has.

In 327 career games, Jones has notched 171 wins, and posted a 2.54 GAA, a .910 SV%, and 24 shutouts. After winning the Stanley Cup as backup to Jonathan Quick in 2013-14, Jones has been the Sharks’ starter for the better part of five seasons. The problem is, though, that Martin Jones has gotten progressively worse every season he has been in teal.

The Martin Jones of last season was a far cry from what hockey fans saw of him just four years ago, when he carried the San Jose Sharks to their first Stanley Cup Final in franchise history. Four years seems like a lifetime ago, and some might surmise that Jones’ best days are behind him because of that. After all, he has personally (and woefully) gotten worse and worse the longer he’s been in San Jose, and hasn’t shown much promise, except for short stretches of time, of returning to what he once was.

The Sharks’ record last year shows this perhaps better than any other measure. Just a year removed from taking the eventual Cup-winning St. Louis Blues to six games in the Western Conference Final, the Sharks fell off worse than any other team, by a long shot.

The San Jose Sharks finished dead last in the Western Conference in the 2019-20 season, gaining only 63 points in the standings with a 29-36-5 record before the COVID-19-caused NHL pause, and the eventual cancellation of all remaining regular season games.

Furthermore, the Sharks finished 29th overall in the league, better only than the sparse Ottawa Senators roster by just a single point in the standings, and the dismal Detroit Red Wings squad that finished with just 39 points. For a team that was thought to still be in their “Cup window,” this isn’t necessarily great company to hold.

Taking a look at goal differential measures sheds a bit of light on what most ailed the Sharks this past season. While they were not firing on all cylinders offensively by any stretch of the imagination, the Sharks’ goaltending did little to help offset that.

The team finished with a -44 goal differential, and finished 29th in the NHL in total goals against, with 226. Devan Dubnyk’s old team in Minnesota didn’t do as bad, but wasn’t spectacular by any means, either.

The Wild finished 10th in the Western Conference last season, and were it not for the expanded 24-team Stanley Cup Qualifiers, might have missed the postseason for the second year in a row. The team finished with 77 points in the standings with a 35-27-7 record, and ranked 21st in the league with 220 goals against. Their goal differential was even at 0.

So, from a deep-diving perspective like we’ve taken today, and perhaps even from a cursory overview, it would seem that the Sharks now have two…pretty similar goaltenders. Almost by all accounts. The biggest differentiating factor is contracts.

Dubnyk has just one year left on his deal. Jones, on the other hand, has a lengthy four years remaining on his contract, carrying a staggering $5.75-million AAV against the salary cap. This makes one scenario the most likely out of all others: Dubnyk will play the veteran mentor role to Jones, hoping to help him return to his game of yesteryear.

In a perfect world, the Martin Jones-Devan Dubnyk dynamic will be this: Jones will continue to work closely with his goalie coaching staff, which includes Sharks legend Evgeni Nabokov, to try and improve on his game and hone his skills in the crease. Dubnyk will be there all the while to push and challenge him to play better, as well as serve as a viable backup option, something they were lacking in Dell last season.

If all goes well, the Sharks prove they are still a competitive team, General Manager Doug Wilson effectively shores up trust in his roster, and Martin Jones plays as well as he needs to in order for the Sharks to stay contenders. Maybe they even get over the final hump and win that elusive first Stanley Cup.