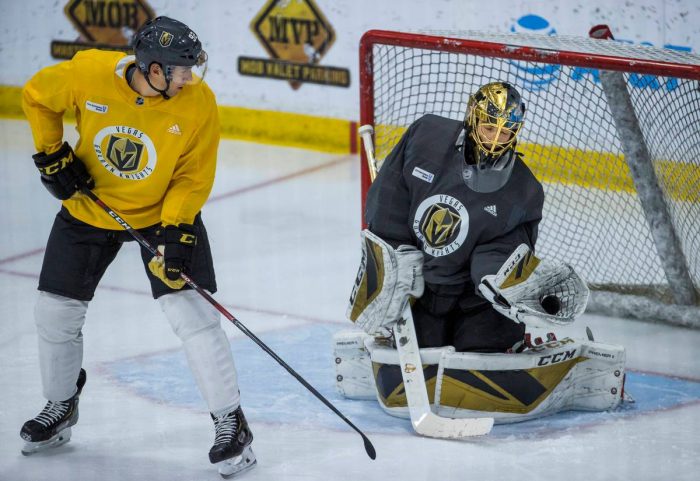 Since the conclusion of the Stanley Cup Final, this unique NHL offseason has felt like anything but “off.” The league moved almost immediately to the 2020 NHL Entry Draft, and then to Free Agency, which started today. The Vegas Golden Knights, much like a large number of other teams, knew they were faced with hard choices, perhaps none more difficult than addressing their goalie situation. And on October 3rd, they did just that.

Almost a week ago now, the Vegas Golden Knights re-signed goalie Robin Lehner to a five-year, $25-million contract. Since being acquired from the Chicago Blackhawks via a Trade Deadline deal way back in February, Lehner solidified himself as the new starter in Vegas, earning most all starts in the Stanley Cup Playoffs over his counterpart, Marc-Andre Fleury.

Lehner was set to become an unrestricted free agent (UFA), so it was vital to lock him up before any other teams had a shot at making offers.

A report made in early September speculated that Lehner and Golden Knights brass agreed on a deal way back in June, that would be for five years at – you guessed it – $25-million.

Lehner denied the speculation in the midst of battling in the Western Conference Final, saying “Yeah, well, it’s not true . . . Again, I’ve, uh … Every team … I’ve been on a lot of teams lately obviously. You know, you have some talks and kind of [discuss] where you’re at, what you want to do. Nothing has been finalized.”

Lo and behold, the eventual contract re-up was the same as the speculation. Right on the money.

Re-signing Lehner was the right choice. As much as Fleury has given to this organization, they couldn’t let a guy walk who is entering the prime of his career at 29 years old, and who has hit his stride as one of the best in the business.

After all the controversy with Marc-Andre Fleury’s agent, the Vegas Golden Knights are probably just relieved all the hearsay is done for good. However, they are faced with a new dilemma: find a suitor for Fleury.

Finding a trade partner in need of a veteran, 3-time Cup-winning goalie shouldn’t be that hard. But when that goalie is 35 years old with a $7-million AAV salary for the next two seasons, well… it kind of is.

Especially when some of the high profile guys have already been moved – Jake Allen, Henrik Lundqvist, Devan Dubnyk, Matt Murray, and others.

So, given the circumstances, the question poses itself: Where does Marc-Andre Fleury go? Are there any potential suitors for him now, seeing as so many guys have already been moved? The answer is always yes.

Here’s where the fun part begins. Let’s make a shortlist of potential landing spots for the man they call “Flower,” Marc-Andre Fleury.

I know, I know. Why is is that every time any player anywhere becomes available, the Toronto Maple Leafs are in the conversation? In this case, I think it’s because they actually are. Frederik Andersen only has one more year left on his contract with the Leafs, and while he certainly should not be pinned with all the blame for playoff failures of late, Leafs fans and management sure seem to make it apparent that they’re open to any and all suggestions in goal. Seeing as Jack Campbell is the only other viable (?) goalie in their system, a Leafs–Fleury marriage could be the perfect arrangement.

Here’s a likely candidate, actually. New Jersey just bought out Cory Schneider, who was handcuffing them up until this point, so to speak. While they do have 24-year old Mackenzie Blackwood on the big club, he hasn’t played consistently well enough to convince them that he’s ready to take the reins. He’s had flashes of brilliance and has shown he’ll be ready one day, sure, but what about this season? Enter the veteran mentor, Fleury.

Detroit is the perfect fit, and I mean perfect fit. Except for one glaring obstacle: Fleury has a full no-trade clause (NTC), so a trade to the Motor City might not be probable. We’re assuming Fleury wants to compete for a Cup, or at least play for a team capable of making the playoffs. And right now, the Red Wings aren’t that. But how cool would it be to see Fleury suit up and show a young Wings team how to be a professional and compete in this league?

This one might be an outlier, but hear me out. I’m not sure the Golden Knights would want to keep Fleury in the West anywhere, except maybe a team in the Central Division. Colorado is now considered a perennial contender, and some have said better goaltending is the hump they need to get over. Don’t we know a guy for that? (Hint: it’s Fleury).

This list wouldn’t be complete without mentioning the Pittsburgh Penguins. This is the club that drafted Fleury 1st overall way back in 2003, and the club where he won all three of his Stanley Cups before being taken by Vegas in the 2017 Expansion Draft. Pittsburgh just moved their starter Matt Murray to the Ottawa Senators, and is left with Tristan Jarry in his stead. And perhaps another goalie position to be filled? I think so. Plus, this would just be the best, most wholesome story line of all. Let’s see it, Pens.

I’m expecting this article to be out of date in the next day or two, so stay tuned for updates for currency. For now, keep an eye out and follow along on TSN’s Free Agency Frenzy Tracker.