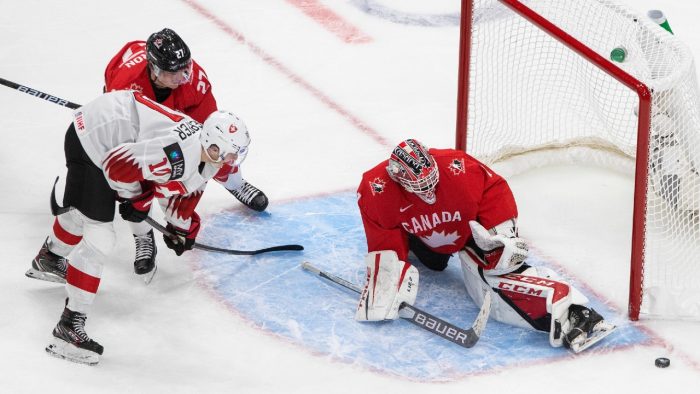 The 2021 IIHF World Juniors are over, and what a tournament it was. The United States took home the gold medal for the first time since 2017, thanks to a 2-0 win against Team Canada in last night’s gold medal game, while Canada took home the silver. Team Finland won yet another bronze medal against Team Russia earlier in the night. This WJC was laden with young, exciting prospects ready to make the jump to the NHL in the years to come, none more so than the goalies. Here are the top five goalies from the World Juniors, statistically, so you know their names and backgrounds before they begin their NHL careers.

Devon Levi was a returning gold medalist with Team Canada heading into the 2021 World Junior Championship, and was far and away the best goalie in the tournament, statistically. In 7 games played, Levi recorded 6 wins, and only gave up an incredible 5 goals against. That’s five goals in seven games. The six-foot-even, 190 lb. 19-year old goaltender posted a 0.75 GAA and .964 SV%, with 3 shutouts.

Levi currently plays for Northeastern University of the NCAA, and was the seventh-round pick of the Florida Panthers in the 2020 NHL Draft. Levi played in the gold medal game against fellow Panthers draft pick Spencer Knight, who just so happens to have finished right below him statistically.

It’s not often I’m right with predictions, but in the case of Spencer Knight, I was 100% right – I wrote an article just before the start of the WJC on how Knight gave the U.S. the best chance to win at the World Juniors. Click here to read that story.

Spencer Knight was entering his third year in the tournament for Team USA, and was part of last year’s team that had a disappointing sixth-place finish. This year, however, things were a lot different, as Knight and the rest of Team USA skated to a gold medal victory. In 6 games played, Knight won 5 of those decisions, and allowed just 9 goals against.

At 19 years of age, Knight was one of the bigger goalies at the tournament, standing at six-foot-three and weighing in at 194 lbs. Knight, the 13th overall pick of the Florida Panthers in the 2019 NHL Draft, currently plays for Boston College in the NCAA.

Even though Slovakia finished 7th out the 10 teams in the tournament, their goalie, 18-year old Simon Latkoczy, finished 3rd statistically among all goalies in the World Juniors. Standing at five-foot-ten and 161 lbs., Latkoczy was one of the smallest goalies there, but managed to put up one of the biggest performances out of all his peers.

Latkoczy managed to record one win, and only gave up 8 goals against in the tournament. He posted a 2.61 GAA and .922 SV% with a shutout to boot, remarkable stats for a team that didn’t play its best hockey. He is un-drafted, and currently on a Junior contract with Dukla Trencin of the Slovakia U20 league.

The Finns are always competitors for making a medal game, and it was no different this year as they squeaked by Russia to capture the bronze. Finland is also known for producing top-end goalies, and Kari Piiroinen is no exception.

Piiroinen allowed 13 goals in his World Juniors stint, and recorded respectable numbers of a 2.18 GAA, .915 SV%, and one shutout. At six-foot-two and 176 lbs., the 19-year old is a good sturdy size for a goaltender of his age. He is un-drafted, and currently on a Junior contract with TUTO Hockey Turku in Finland’s Mestis League.

Yaroslav Askarov was one of the higher-profile goalies heading into the 2021 WJC, as just this past year, he became the highest-drafted Russian-born goaltender of all time to be drafted into the NHL, when he was picked 11th-overall by the Nashville Predators. For a more in-depth profile on Askarov, click here to read Seltytending’s recent piece on him.

In 6 games played, Askarov allowed 15 goals and recorded a 2.50 GAA and .914 SV%. While these numbers aren’t as good as that of Levi and Knight, they are still impressive, and Askarov is only 18 years old, after all, and faced a slew of NHL-ready forwards in the tournament.

The six-foot-three, 176 lb. Russian currently plays with SKA St. Petersburg of the KHL.

While this is just a cursory overview of each of the top five goalies statistically from the 2021 World Junior Championship, you can expect to hear a lot more about each and every one of them in the next few years as they make their way into their respective NHL organizations and, one day, onto a sheet of NHL ice.