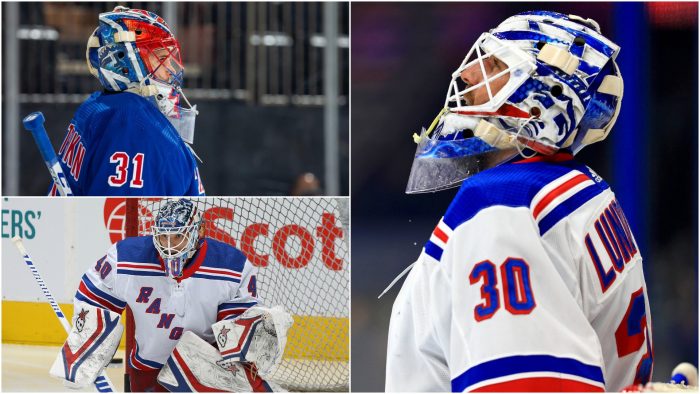 The New York Rangers find themselves in a delicate situation in goal. Read that back, and you might be confused – because no one has said that about the Rangers for the last fifteen years. Henrik Lundqvist, appropriately nicknamed league-wide as “The King,” has been one of the best, if not the best, goaltenders in the NHL since he entered the league in 2005 with the Rangers, and fans haven’t had to question their stalwart stud for as long as he’d been there. In 2020, though, New York brass is juggling three goalies, Alexander Georgiev and Igor Shesterkin being the others, and are confronted with the reality that a shake-up in goal is coming. Here’s what the New York Rangers should do with their three-headed goalie monster.

Some might consider a roster that has three starting goalies on it a blessing. And, for a short time, it can certainly seem that way. When it comes down to it, though, it is simply not feasible to roster three starting goaltenders on starting goaltender salaries – especially when one of their contracts is up this summer, and the others’ are up the following summer, with two due for big raises. Before we make a verdict on how the Blueshirts should navigate this situation, though, let’s get to meet and dissect the three masked men.

Hank, Hank, Hank. The King. Henrik Lundqvist has been the face of the New York Rangers ever since he entered the NHL. Not only has he been dominant in goal for most of his career, he’s also become entrenched in the community, often appearing on The Tonight Show With Jimmy Fallon to show off his skills on the guitar, or just spotted walking the streets of Manhattan. It’s no surprise, really, that with Lundqvist now in the twilight of his career, fans are going to be devastated to see him go. It will truly be the end of an era. With that being said, let’s gloss over just some of The King’s accomplishments playing under the roof at Madison Square Garden.

Hank owns almost every franchise record for goalies in Rangers history: wins, shutouts, playoff wins and games played. A 7th-round pick in the 2000 NHL Draft, he won at least 30 games in each of first 11 seasons, took the Rangers to the Stanley Cup Final in 2014, and in 2017 became just the 12th goalie in NHL history to reach 400 wins, all in a Rangers sweater. A nominee for the Vezina Trophy in a number of seasons, Lundqvist has won once, in 2011-12. His career stat line is something to marvel at, too: 887 GP, with a record of 459-310-96, a 2.43 GAA, .918 SV%, and 64 shutouts. Henrik Lundqvist will go down as one of the best goalies in both New York Rangers and NHL history.

Georgiev burst onto the scene two seasons ago as a backup to Henrik Lundqvist, and has slowly had his workload increased since joining the big club. The first Bulgarian-born player to ever play in the NHL, the six-foot-one, 178 lb. 24-year old agreed to terms with Rangers in 2017 after playing in Liiga in Finland. Georgiev began the 2017-18 season with Hartford in the AHL, before being called up in 2018. In 10 games in 2018, Georgiev went 4-4-1, posting a 3.15 GAA, and a .918 SV%.

Georgiev’s stint within the Rangers organization is notable, because he didn’t enjoy a particularly spectacular stay in Hartford with the Wolf Pack. In the 2017-18 season before he was called up, Georgiev went 14-13-7, with a 2.98 GAA, and a .909 SV%. He has since accrued 77 GP in the NHL, with a career stat line of 35-31-7, a 3.00 GAA, .913 SV%, and 4 shutouts. Georgiev has started the most games this season out of the three Rangers goalies, so he’s pretty much cemented himself as the starter – for now.

A 4th-round draft pick back in 2014, Igor Shesterkin has been hailed by Rangers fans as “the goalie of the future.” Now seemingly ripe and ready for the big leagues, that “future” might very well be right now. Before making the jump to North America, the Moscow, Russia native spent three straight seasons in the KHL, posting a sub-2.00 GAA in each of those seasons, his best year boasting an unthinkable 1.11 GAA. Last year, he put up a .953 SV% in the KHL. Talk about separating himself from the pack.

If there was any worry Shesterkin would have some trouble translating his success to the North American style of play, all of that was crushed in his first season in AHL Hartford. In 25 games, Shesterkin managed a 1.90 GAA, and a .934 SV%. In his first season. That just doesn’t happen for 24-year old goalies, not ones who belong in the NHL, anyway. His above 2019-20 stat line is the same as his NHL career stat line. With just 12 games played for the Rangers, it might seem a bit presumptuous to say that the team has their goalie of the future on the roster now. But ask any Rangers fan, and Shesterkin is just that good.

Now that we’ve learned a bit about each of the three goalies, it’s time to make a verdict on what the New York Rangers should do moving into next season. There was some serious speculation approaching the February Trade Deadline that Alexander Georgiev would be dealt from the team, but that obviously never came to fruition. Besides, I’m not so sure General Manager Jeff Gorton is quite ready yet to part ways with Georgiev. The answer to what the team should do with him and the other goalies will probably be decided by, you guessed it: their contracts.

I’ll start out by saying this: Igor Shesterkin isn’t going anywhere anytime soon, no way, no how. Moving on, then. While it is a much different challenge to trade an RFA at, say, the Draft, it’s still possible to pull it off. So, I wouldn’t rule it out for Gorton to make a deal involving Georgiev. His trade value has never been higher, and he’d likely fetch back a 1st-round pick or an established young player. Nevertheless, I just don’t see this happening. The most likely scenario I see playing out is a buyout of the last year of Henrik Lundqvist’s contract, reducing the cap hit against the team’s payroll substantially and making way for the young tandem of Georgiev and Shesterkin to take over the crease in New York.

Lundqvist’s play has just declined too much and his contract has just become too pricey to carry for another year, especially when Georgiev will likely demand big money this summer and Shesterkin will demand even more next summer, possibly sooner. For this reason, and considering the fact that the team has seen an influx of young talent that they will need to sign relatively soon, I think the right move for Jeff Gorton and the Rangers to make is to buy out Lundqvist, re-sign Georgiev to a bridge deal, and sign Shesterkin at some point during the coming season. It may be tough for Rangers fans and hockey fans alike to think this might be the last we see of Henrik Lundqvist, but Gorton ultimately needs to act in the best interest of the team. And besides, The King will always hold a special place in our hearts.