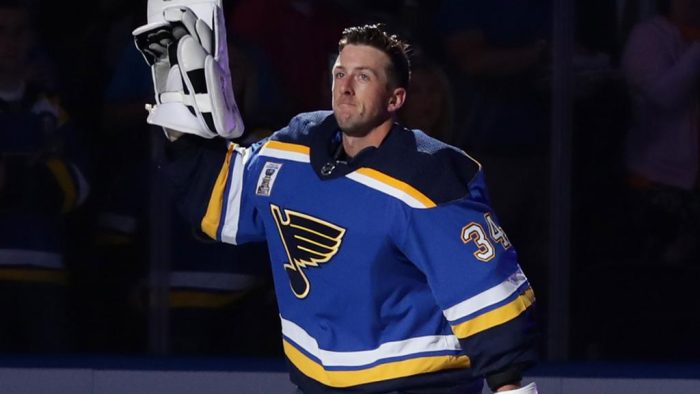 Last Wednesday, the St. Louis Blues and Montreal Canadiens completed what could appropriately be called the first big trade of this NHL offseason. Of course, the Stanley Cup Playoffs are still happening, but for the teams that have been eliminated from contention, that doesn’t matter much. What does matter, though, is making the moves you think you need to to be in contention next season – and that’s exactly what the Jake Allen trade signals for the 2019 Cup Champion Blues.

The St. Louis Blues traded goalie Jake Allen and a 2022 7th-rd pick to the Montreal Canadiens on Wednesday for a 3rd-rd pick and 7th-rd pick this year, previously acquired from the Capitals and Blackhawks respectively.

Allen, 30, has spent his entire 7-year NHL career in St. Louis since being drafted 34th overall in 2008. He’s had to battle to establish himself as a starter in this league, most notably against Jaroslav Halak, and most recently against Jordan Binnington.

Allen was relegated to the backup role last season while Binnington carried the Blues to their first-ever Cup win in his rookie year. Allen stayed in that role this season, appearing in just 24 games with the Blues in 2019-20.

Despite his improved play, Jake Allen was never drafted to be a backup… not in St. Louis. But in Montreal? Maybe.

They need to sign captain Alex Pietrangelo (a UFA this offseason), among others.

Allen gives Montreal that nice, “veteran backup” presence that so many teams look for when they think they’re moving closer to being perennial playoff contenders. The undisputed starter for the Habs is still Carey Price, who is just entering the beginning of his massive 10-year contract.

Price played 58 of 71 games last season, and was backed up by three different goalies at one time or another, who combined to go 4-6-3, with a combined .889 SV%.

It’s safe to say that Jake Allen will solve this problem and give Price the luxury of catching his breath every now and then, which will put the Habs in a much better position in goal.

The Montreal Canadiens now have a whopping $14.835-million dedicated to their goaltenders.

Jake Allen was supposed to be “the guy” for the St. Louis Blues, but never really cemented himself as that, and struggled too much for too long to play consistently well for the organization. Management now thinks they have their guy in Jordan Binnington, and both parties knew it was time to part ways.

With this trade to Montreal, the Jake Allen era is now officially over in St. Louis. Thanks for the memories.