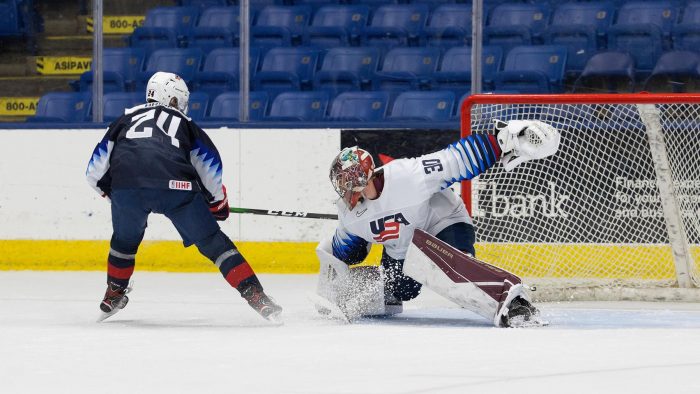 With the exciting announcement of the news that the NHL and the NHL Players’ Association came to an agreement to play a 56-game regular season beginning on January 13th, 2021, I don’t blame the hockey world for being so fixated on that date, and on the NHL returning for a new season. However, I do find it strange that hockey fans have seemed to mostly overlook another huge event in the hockey world that we’re being gifted with even sooner: The World Junior Championship.

The 2021 IIHF World Junior Championship is scheduled to begin on Christmas Day, running from December 25th to January 5th, and taking place at Rogers Place in Edmonton, Alberta. I, for one, consider the World Juniors one of the best events in hockey that happens every year, and am extremely excited for this year’s tournament.

Now that I’ve gotten all that off my chest, hopefully I’ve helped you find some excitement for the 2021 WJC, too! If not, maybe a certain goaltender can: Spencer Knight.

Spencer Knight is one of the top, if not the top, goaltenders who is going to appear in the World Juniors this year. The 19-year old is returning for his third year on the squad, effectively making him the most senior member on the American side. He is by all means expected to be the no. 1 goalie for the red, white, and blue this tournament, and gives the United States the best chance to “win it all” that they have had in years.

If you haven’t heard Spencer Knight’s name before reading this, you are most certainly going to remember it after the conclusion of the World Juniors, whether he helps the U.S. to a gold medal or not.

Knight was drafted 13th overall in the 2019 NHL Entry Draft by the Florida Panthers, and recently started his sophomore season of NCAA hockey with Boston College. As a freshman last year, Knight was a finalist for the Mike Richter Award as the NCAA’s top goalie, and finished in the Top-10 among NCAA goalies for all major stats.

While he has certainly enjoyed a high level of success in his short college career to date, Spencer Knight hasn’t exactly enjoyed the same success at the international stage of competition – specifically at the World Junior Championships.

In the 2020 WJC, Knight finished the tournament with a 2.49 GAA and .913 SV% in four games, as the United States finished just sixth in the tournament, its worst finish since 2012 when they finished seventh. While Knight’s numbers certainly do not indicate that he was the biggest problem last year, he, like every player chosen for the team this year, looks to help the U.S. rebound to chase the country’s first gold medal since 2017.

“My priority isn’t to be the top goalie of the World Junior Championship, but to give the players on my team the best chance to win a game,” said Knight, on the upcoming tournament. “I know it sounds cliché, but I’ve really become so focused on just writing my own story and just doing my own thing, what’s best for me and not worrying about who’s in the other net.”

There are some pretty good goalies in the other nets, as it is. Yaroslav Askarov of Russia will be backstopping his country’s team, and just became the highest-drafted Russian goalie in NHL history (11th overall by the Nashville Predators).

Knight’s teammates on the American squad have expressed confidence in him and his ability to help this team rebound from last year’s finish, too.

Another returner to the team is 2019 Montreal Canadiens’ draft pick Cole Caufield. Caufield showed praise for Knight when asked about the goalie:

“He’s in his third year at the world juniors, so he knows what’s at stake. I think going into it, he’ll have a lot of confidence and be a lot more comfortable.”

One thing’s for sure: there is a lot of talent on this USA roster.

On defense, Ryan Johnson (2019 31st overall pick by the Buffalo Sabres) and Jake Sanderson (2020 5th overall pick by the Ottawa Senators) lead the way on the ice. For the forwards, Alex Turcotte, Cole Caufield, and Trevor Zegras are just some of the recent NHL draft picks to take the ice for the United States.

The U.S. has eight players returning (Knight included), while new faces fill out the rest of the roster. An injection of some new, young blood is probably a good thing for this team, but they definitely still have a good mix of veterans in there, too.

Having a goalie like Spencer Knight on your roster is always a good thing going into this tournament. It’s his third time in the World Juniors, and his second year as the bonafide starter. He just came off an excellent freshman year in the NCAA, and per all reports has looked solid in preparation for the 2021 WJC. Knight gives the United States their best chance to capture a gold medal since they last did in 2017, and is positioned to be the stand-out goalie of this tournament.