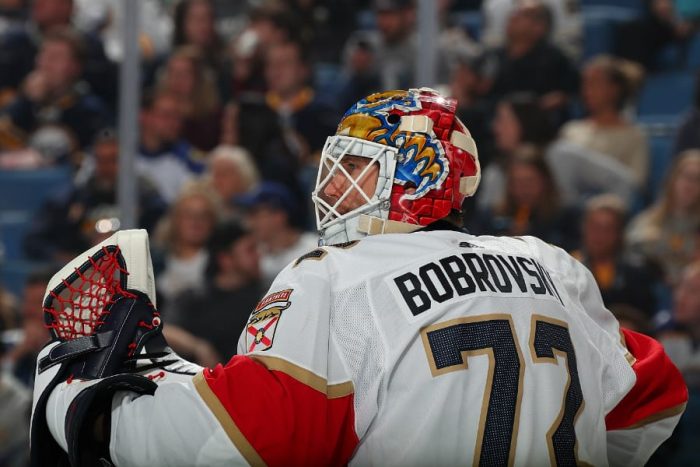 After another disappointing season in 2018-19 in which the Florida Panthers failed to make the Stanley Cup Playoffs, General Manager Dale Tallon and company decided it was time to be aggressive and shore up their roster with some of the best free agent talent on the market last summer. The two players they were targeting were coming from the Columbus Blue Jackets: star forward Artemi Panarin, and goaltender Sergei Bobrovsky, who is supposed to be entering his prime. After losing out on Panarin to the New York Rangers, who signed him to a monster contract, Bobrovsky was the shiny trophy acquisition Tallon had to show off to his fanbase, inking him to a 7-year, $70-million contract, with a $33-million signing bonus. Nearing the end of the 2019-20 regular season, though, the signing has some Panthers fans worried – and rightfully so…for now.

Sergei Bobrovsky is now considered a veteran goaltender in the league. An NHL mainstay since he came over to the Philadelphia Flyers on an entry-level deal from the KHL in 2010, the six-foot-two, 187 lb. 31-year old’s name is often mentioned with the best of them among the league’s starting goalies. Bobrovsky has won two Vezina Trophies in his career for the league’s best goaltender, first in the 2013 shortened season, and again in the 2016-17 season.

Bobrovsky’s stat lines in each of his Vezina-winning seasons were remarkable, and both for a Columbus Blue Jackets team that was never much to gaze at. In 2013, Bobrovsky won 21 of 38 starts, and posted a 2.00 GAA and .932 SV%, with 4 shutouts. In a full 2016-17 season, he started 63 games, posting his first 40-win season (41) and a 2.06 GAA, .931 SV%, with 7 shutouts. Even with such an impressive resume, the knock against Bobrovsky was this: despite making the playoffs with his team in 5 seasons during his time in the NHL, he had yet to win a playoff series. Last year, though, he officially got that monkey off his back.

In 2018-19, Bobrovsky started 62 games in the regular season for the Blue Jackets, going 37-24-1, with a 2.58 GAA, .913 SV%, and a league-leading 9 shutouts. Nearing the playoffs, everyone had to ask: Is this the year Bobrovsky finally helps his team to a playoff series win? Drawing the President’s Trophy-winning Tampa Bay Lightning in the first round wasn’t so encouraging. However, Bob and the Jackets pulled off something no one had seen coming – they won Game 1. And then they won Game 2. Taking the series back home to Nationwide Arena, the Jackets finished the job. Backstopped by Sergei Bobrovsky, they had swept the Lightning, and earned their first team playoff series victory, with Bob earning his first personal playoff series win.

Last year’s performance, Bobrovsky’s last season in Columbus, may very well have been a selling point for the Panthers to sign Bobrovsky with such term and with such a high cap hit. That, coupled with the fact that he was the best goalie on the free agent market willing to go elsewhere in a long while, helped him demand such a lucrative deal. To date, though, Bobrovsky has been underwhelming. That’s not the worst, though. For most of this year, Sergei Bobrovsky has been just plain bad. The question then arises: Is it time to panic? My answer: not yet.

In 50 GP for the Panthers this year, Bobrovsky is 23-19-6, with a 3.23 GAA, and a .900 SV%, with 1 shutout. Simply put, those are not the numbers that Florida bargained for. However, with his save percentage sitting below .900 for most of the year, the fact that he’s brought it up to a .900-even is encouraging. Encouraging, also, is the fact that, before the pause in the NHL season due to the COVID-19 pandemic, Florida won two games in a row. Sure, Bobrovsky wasn’t playing in either, but the Panthers have (hopefully) found a capable backup in Chris Dreidger, who has been solid in the games he’s played.

Although it may help to lessen the workload this season and in the long run, a capable backup isn’t going to make Bobrovsky live up to his contract. What will is posting Bobrovsky-like numbers, winning a Bobrovsky-like amount of games, and stealing games for his team when they aren’t playing up to snuff. This is what he’s shown he can do, and this is what he has to do.

As disappointing as this year has been for Bob, and for the Florida Panthers as a whole, there are signs that point to him (and the team) being able to turn it around. In his last 3 seasons with the Blue Jackets, Bobrovsky won 41 games, 37 games, and 37 games. He also posted a career-high 9 shutouts last year. Additionally, he secured his first playoff series win last season, not to mention it being against the best team in the league, with the best record in the salary cap era. Bobrovsky’s career numbers remain solid; in 507 GP, Bob is 278-172-43, with a 2.54 GAA, .917 SV%, and 34 SO. Think of the milestones he could hit as a Panther: 300 wins. 400 wins. 50 shutouts.

After signing with Florida this past summer, Bobrovsky made his excitement known, and his vision clear:

“I am looking forward to performing for Panthers fans. I want to thank owner Vincent Viola, president Matt Caldwell, [general manager] Dale Tallon and coach [Joel Quenneville] for trusting me and giving me an opportunity to win the Cup with them in South Florida. I can’t wait to put the Panthers uniform on and start winning.”

Bobrovsky said it himself: he wants to win a Stanley Cup in Florida. And the Panthers could very well be contenders while he’s guarding the crease for the next six years. All it’ll take is a rebound on his part, and some holes to be filled all around.

While no one is sure if/when the NHL season will resume, the Panthers are still in the playoff race. In a season-long dogfight with the Toronto Maple Leafs for the third spot in the Atlantic Division, Florida currently sits just 3 points behind them, with 78. With that record in these circumstances, it makes fans think where the team will be once Bobrovsky turns it around. And there’s no reason in the world to believe he’s not capable of doing that.