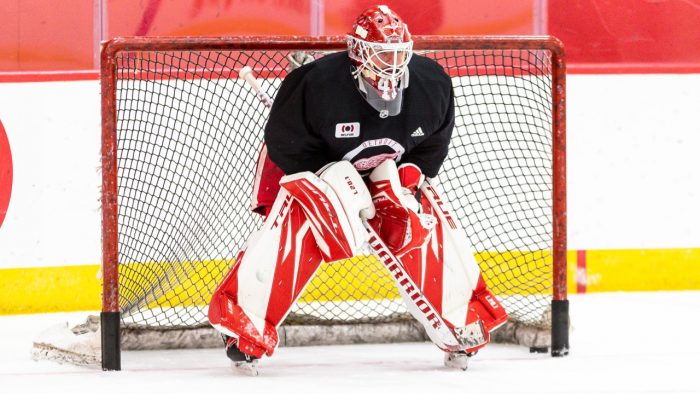 After 25 years of unparalleled success, it’s safe to say the Detroit Red Wings aren’t used to losing. And they are certainly not used to losing this bad, and this often. But with a 2-6-2 record through 10 games so far in the 2020-21 season, they look destined to repeat a similar finish to last season’s, one that saw them place dead last with a measly 39 points in the standings and with an historically bad -123 goal differential (GD). With much of their near future up in the air, the goaltending position in particular presents a flurry of questions, one that is met with certain uncertainty.

Signing former New York Islanders goalie Thomas Greiss to a contract with the team was one of the better offseason moves that the Red Wings organization made. However, it looks like going out and getting a capable goalie wasn’t quite enough to move the needle in the team’s favor, given their record as it now stands.

But, in following the announcement the team would not be looking to bring back longtime starter Jimmy Howard after last season, the Red Wings were in the market for a goalie, and Greiss brought the veteran experience and background they were looking for to guide a young, inexperienced roster. It was probably for the best, as Jimmy Howard announced his retirement just a week ago.

The result achieved with Greiss isn’t exactly what the Red Wings had in mind so far. In seven games played this season, the 34-year old goalie has yet to win a game, going 0-5-2, and posting a 3.03 GAA and .897 SV%.

While no one expected him to put up numbers resembling those he had with the Isles, they are a far cry from even last season’s numbers on Long Island. In the 2019-20 season with the Islanders, Greiss went 16-9-4 in 31 games played, and posted a 2.74 GAA and .913 SV%.

Now entering his third season with the Detroit, the team has a pretty good idea of what they have in Jonathan Bernier. The 32-year old’s experiment as starter of the Toronto Maple Leafs failed to work out, and it looks as if that’s happened again with the Red Wings.

For the kind of season that the Red Wings had in 2019-20, Bernier’s numbers were actually pretty good. For a 39-point team, they could actually be called excellent. In 46 games played last season, Bernier put up a 2.76 GAA and .907 SV%, with a shutout en route to a 15-22-3 record. That performance could have convinced many he might hold some promise for the future.

While his body of work in the NHL is impressive and far bigger than what 99% of goalies will ever achieve, Bernier just isn’t cut out to lead the Red Wings through this rebuild and into the future.

What does the future at the goaltending position look like for the Red Wings?

The answer right now is, it’s complicated. The current options in net leave a lot to be desired, and have an expiration date that grows ever nearer with each passing season. And the prospects in the pipeline, if any, don’t appear to be anywhere near ready to step in and fill the hole left by those two goalies, were one to appear.

Greiss is signed for two years, at a $3.6-million AAV through the 2021-22 season, and Bernier is in the last year of a three-year, $3-million AAV contract.

The Red Wings have one of the youngest teams in the entire NHL, and it would be unfair to expect them to rush through their rebuild at this stage in the process, or even to play better than they have been of late.

With all the high draft picks and competent management in Steve Yzerman, however, the future does, in fact, look bright for this team, even though I picked them to finish dead last in my power rankings before the 2020-21 NHL season began.

So while the Red Wings’ future in net remains as uncertain as ever, there’s no need to fret. They have plenty of time to change that, and to find the goalie of the future.