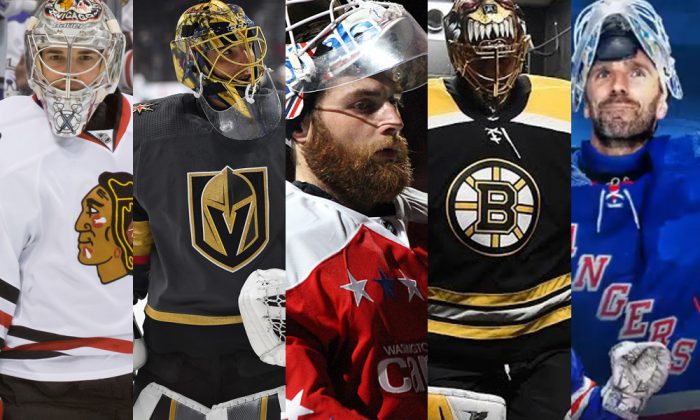 In what was already expected to be a crazy 2020 NHL offseason, the whirlwind free agency period only added fuel to the fire. And I mean that in the best way possible. Rosters were shaken up across the league, big-name players are headed cross-country to different teams, and most of all, NHL goalies experienced a crazy series of switcheroos that totally changed not only the goalie landscape, but the overall league landscape as well. Here’s a synopsis of every goalie moved in NHL Free Agency, and what it means for the teams they’re going to, and the teams they left behind.

It’s only appropriate, in my mind, to start with the man they call “The King.” After 15 years playing at Madison Square Garden with the New York Rangers, Henrik Lundqvist was bought out last month, marking the end of his time with the Blueshirts. It had been speculated that he might weigh the option of retirement, but evidently, Hank feels like he still has some gas left in the tank.

Lundqvist signed a 1-year, $1.5-million deal with the Washington Capitals during free agency, making up the money he would have lost after the Rangers bought out his $4.5-million contract (nice gesture by Washington). Lundqvist replaces Braden Holtby, but will likely play the veteran backup role to 23-year old Ilya Samsonov, who the Caps think is ready to take that next step. Look for Lundqvist to be a kind of “insurance policy” if Samsonov ever needs a break, or gets pulled mid-game.

Speaking of Braden Holtby, Holtby inked a new deal of his own! After being unable to reach a deal with the incumbent Jacob Markstrom, the Vancouver Canucks were forced to look elsewhere to shore up their goaltending position – and I think they did just fine with signing Holtby to the squad.

The two camps agreed on a 2-year, $8.6-million deal, with a $4.3-million AAV. You could say Braden Holtby wore out his welcome in Washington after posting the worst numbers of his career last season: a 3.11 GAA, .897 SV%, and a poor playoff run where he surrendered 14 goals in just five games against the New York Islanders. But Holtby is still just two seasons removed from his Stanley Cup win, and boasts ten seasons of NHL experience.

Expect Holtby to start out of the gate, and maybe to eventually split time with Thatcher Demko, who he will be an excellent mentor to as Demko looks to solidify himself as the Canucks future starter. Important to note, too, is that Holtby’s contract has no built-in protections, so the possibility of him being exposed to Seattle in the coming Expansion Draft is there.

If you’re picking up on a chain reaction effect, you’re right! Because the Canucks couldn’t sweeten the deal enough to keep him in Vancouver, Jacob Markstrom defected to the neighboring province of Alberta, and became the newest member of the Calgary Flames.

Markstrom earned every penny of that contract with his recent play for the Canucks, and joins a goalie group of David Rittich and Louis Domingue, positioned to be the starter moving forward.

This remains one of the more surprising moves for me. While Matt Murray has certainly dropped off with his play the past few seasons, I didn’t think the Penguins had the immediate goalie depth to afford to ship him out. And they didn’t think so, either – GM Jim Rutherford actually expressed his desire to re-sign Murray, but blamed cap restrictions for having to trade him.

Matt Murray was traded to the Ottawa Senators for Jonathan Gruden, and a 2nd-round pick in the 2020 Draft that turned into Joel Blomqvist. Murray later signed a 4-year contract worth $25-million, carrying a $6.25-million AAV.

Still young and poised to enter his prime playing years, the 26-year old Murray already has two Stanley Cups to his name, and has the chance to be a big part of the Senators’ coming “Renaissance,” so to speak. He comes into Ottawa the clear starter over Anders Nilsson and Joey Daccord, and is expected to make a huge impact with the young roster.

Devan Dubnyk is another guy who just wore out his welcome, but in a different sort of way. Dubnyk was falling out of favor with a young, retooling Minnesota Wild team that was trying to turn over some of its vets into younger talent. So, it was more of a natural departure from the organization.

Last season, Dubnyk didn’t have great numbers; he posted a 3.35 GAA and .890 SV% in 30 games played. That’s not much worse than the stats of the goalie he’ll be challenging next season, though. Martin Jones, the Sharks starter of five seasons, put up a 3.00 GAA and .896 SV% last year, pretty much right around where Dubnyk’s numbers were at.

Dubnyk is in the final year of his 6-year deal, and carries a $6.3-million AAV to the Sharks. Martin Jones is signed through the 2023-24 season, and his cap hit comes in at $5.75-million. Expect the two to split time for most of the season, with Head Coach Bob Boughner riding the hot hand when it comes. The ultimate goal, though, is for Dubnyk to push Jones to be a better goalie for the team moving forward.

Here’s an interesting one. After parting ways with Devan Dubnyk, GM Bill Guerin and the Wild felt the need to add some depth to the crease, and signed Cam Talbot to a 3-year, $11-million deal with the team. Talbot’s contract carries a $3.6-million AAV.

I don’t know about you, but that sounds like starter money to me. Especially when the next best option is Alex Stalock, and the prospect Kaapo Kahkonen is a ways away from vying for the starting job in my opinion. Additionally, Talbot hasn’t had a real starter’s workload since the 2017-18 season, when he appeared in 67 games with the Edmonton Oilers.

I had to do a double take when I saw that Corey Crawford was 35 years old. Where did the time go? Anyway, this one isn’t so surprising. The Chicago Blackhawks are wising up to the fact that they are closer to a rebuild than they are to another Stanley Cup, and it was time to say farewell to the goalie that won them their last two in 2013 and 2015.

Crawford signed a 2-year, $7.8-million contract with the New Jersey Devils. His contract has a $3.9-million AAV. You probably haven’t heard much of Corey Crawford in recent years, but that’s not because he’s been bad, he’s just been hurt. In the past three years, Crawford has only made it into 107 games. That’s mainly due to injury.

In 40 games last year, Crawford put up pretty good numbers for a mediocre hockey team: a 2.77 GAA and .917 SV%. He also led the Blackhawks past the Oilers in the Stanley Cup Qualifiers, recording a .907 SV% through nine games. Crawford still has some good years in him, and is an upgrade to what the Devils had last year.

Thomas Greiss has been a bit of a journeyman during his time in the NHL. He went from San Jose, to (then) Phoenix, to Pittsburgh, to the New York Islanders, and now to Detroit.

Greiss inked a 2-year, $7.2-million contract ($3.6-million AAV) with the Red Wings after Detroit said they wouldn’t be seeking to renew the contract of longtime starter Jimmy Howard. In 31 games last year, Greiss posted a 2.74 GAA and .913 SV%. He also appeared in four playoff games, recording a 2.02 GAA and .929 SV%. He is one season removed from winning the William M. Jennings Trophy in tandem with Robin Lehner for least goals allowed in the entire league.

While the Red Wings aren’t anywhere close to competing for a Stanley Cup, or even competing for a playoff spot for that matter, they are a better team than last season. In addition to Greiss, the team acquired the likes of Marc Staal, Vladislav Namestnikov, Bobby Ryan, and Troy Stecher. One thing is for sure: this is Thomas Greiss’ crease.

While those were the biggest names, a couple other moves are worthy of mention. Former San Jose Sharks goalie Aaron Dell signed with the Toronto Maple Leafs on a 1-year, $800K deal. He will likely play backup to Frederik Andersen and Jack Campbell.

Marc-Andre Fleury was not trade, and will stay with the Vegas Golden Knights alongside Robin Lehner, who just signed a 5-year extension. Lehner will undergo shoulder surgery in the offseason, so Fleury could start more games to begin the year.

Cory Schneider signed a 1-year, $700K deal with the New York Islanders, but his contract has yet to be finalized, waiting upon league approval for salary cap purposes.

The best part about NHL Free Agency is that it might not even be over. These are the moves that have been made thus far, but be sure to check back for any future trades and signings.