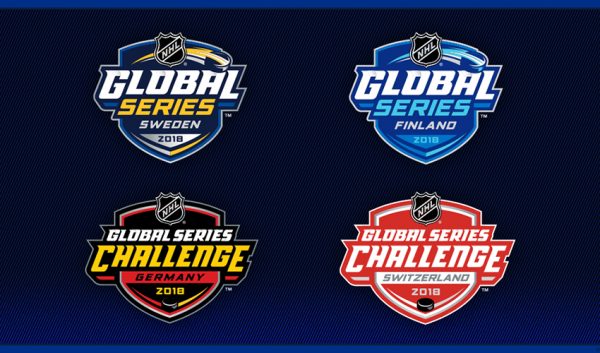 A number of weeks ago, the National Hockey League announced it would be hosting the 2018 NHL Global Series, sending a number of NHL clubs overseas to various countries in Europe to hold their training camps and play a series of regular-season games against each other, repeating what they did this past season when they held games in Stockholm, Sweden. The league will also be sending teams back to China for another round of the NHL China Games, just as they did a year ago. NHL Commissioner Gary Bettman and other league officials claim that the goal of these trips is to grow the game, but the details suggest anything but.

First, here’s the rundown: the Edmonton Oilers and New Jersey Devils will play their 2018-19 season-opening game in Gothenburg, Sweden at Scandinavium on Oct. 6. Beforehand, each team will be finishing up their training camps in Germany and Switzerland, respectively. To add, on October 1, the Devils will face off against SC Bern of the National League at PostFinance Arena in Bern, Switzerland, and the Oilers will play in a tilt against Kölner Haie of the Deutsche Eishockey Liga at Lanxess Arena in Cologne, Germany on October 3. A month later on November 1-2, the Florida Panthers and the Winnipeg Jets will be at Hartwall Arena in Helsinki, Finland for a pair of back-to-back games.

The NHL league office is marketing the 2018 Global Series perfectly. New Jersey players Nico Hischier and Mirco Mueller are both natives of Switzerland, a couple of the small number of players to hail from that country. Surely, Swiss NHL fans will pour into an arena to watch their own, and the players themselves should be ecstatic to go home to play in front of family and friends. Winnipeg’s Patrik Laine and Florida’s Aleksander Barkov are both natives of Finland, so the chance to play in front of their home country and for Finns to be able to see them play against each other is a once-in-a-lifetime opportunity. Edmonton’s Leon Draisaitl is from Germany, and will get to play against a team from the DEL, in Germany. But is this really the reason the NHL has orchestrated this?

Just a year ago, the Colorado Avalanche and the Ottawa Senators faced off in a series of games between each other in Stockholm, Sweden, with the coincidence of both their current captains being Swedish (Gabriel Landeskog, Erik Karlsson). To boot, a good amount of Swedes may actually already be fans of these teams, with Swedish NHL greats like Peter Forsberg and Daniel Alfredsson having played for each club. The excuse of sending certain teams with certain players to various locations in Europe so they can “play in front of family” and so the fans can “see their countries’ stars” is a tired one. Don’t get me wrong, I’m not discounting that thousands of people will, in fact, enjoy this event, I’m just saying if they wanted to “globalize” the game…Pyeongchang, anyone?

The NHL elected not to send their players to the 2018 Winter Olympics in Pyeongchang, effectively disenfranchising millions of fans and furthering the friction between the league and its players. The apparent main reason that the NHL made the decision to abstain from the Olympics is that they would have been responsible for all travel-related costs, insurance and player and guest accommodations, a burden usually covered by the International Olympic Committee (IOC). The IOC told the NHL that it would not be paying for their players in the 2018 Olympics.

Now, this reason seems valid enough, as the NHL could make the argument of being at a lack of funds. However, in March of last year, the International Ice Hockey Federation (IIHF) said that it would cover the costs of travel and insurance, stepping in with “a contribution that could [have] run up to $20-million.” The NHL Board of Governors and team owners rejected this offer, which sheds light on the true reason behind their decision to abstain from the Olympics: money.

IOC Spokesman Mark Adams said in an interview with Reuters that “this time [2018 Pyeongchang Olympics] the owners of the NHL clubs [were] putting more commercial conditions to the IOC and the Olympic movement.” At the core of the long and arduous argument between the IOC and NHL team owners was the league’s desire to be given commercial rights to market the Winter Games on its platforms, which would require the NHL be granted IOC Top Sponsor status.

The NHL believes that the talent pool it would have been “handing over” to the Olympic games was valued at $3.5-billion. For this reason, the offer from the IIHF to cover all costs traditionally covered by the IOC was not enough for the NHL and team owners because there was not enough incentive in the bargain for them. The IOC made a statement saying the NHL knows that “the Olympic movement cannot treat the owners of a commercial franchise of a national league better than an international sports federation or other professional leagues.” It seems as if the NHL was trying to find a way around some of the rules and make some money off of what other leagues could not.

So, when it comes down to it, the NHL was not going to make any money off of sending their players to Pyeongchang. This is what almost kept them from participating in Sochi in 2014 and Torino in 2006. Additionally, there would have been a 17-day gap in the regular season, a “primetime” of opportunity to get butts in seats and eyes on screens as the NFL season is over and the MLB season yet to begin. The fact that money was the primary reason for not participating in the Olympics sheds light on the real reason they hold the NHL Global Series: money.

Since the Global Series is the NHL’s own event, using their own league sponsors, they have all the broadcasting rights and all the licensing rights, merchandise-wise and otherwise. Unlike the Winter Olympics, they make money off of it. And instead of an extended halt to the season, they continue uninterrupted.

“We are extremely pleased with the continuity of our international visits . . . You cannot develop an international strategy or establish a presence without these events.”

If the goal of the NHL is to “develop an international strategy” or “establish a presence” globally, and they are once again hosting the NHL China Games to tap into a potential market of over a billion people, why not send the best players in the world to an Olympic Games that were in Asia, in that very market? Again, it just doesn’t add up. They can’t play games in China claiming to want to spread the game to a new market, while refusing to play in South Korea, in the same market, for another set of reasons.

What’s more insulting is that Bettman, before making the final decision to disallow players from representing their countries on a world stage, offered to let them participate if the NHL Players’ Association (NHLPA) agreed to extend the current Collective Bargaining Agreement (CBA) through the 2022 season. For a CBA that so unfairly treats players and appropriates their rights as individuals, Bettman was practically trying to extend the period in which he can keep the majority of control in the league in exchange for players playing for their home countries. Again, this is a despicable look at what these backroom decisions actually entailed.

I think the NHL Global Series is a good idea. I think it gives fans in other areas of the world a chance to see the best hockey players the planet has to offer, and I think it brings the hockey community closer together. But, I don’t buy what the NHL is selling as the reasons behind it. I don’t buy into the leadership the league is being mismanaged by and I will never sympathize with the decision to not partake in the 2018 Winter Olympics. Likewise, I think Deputy Commissioner Bill Daly’s comments on NHL participation in the 2022 Olympics being “a long way off” are insulting and out of touch with what fans want.

At the end of the day, the NHL is a business just like any other sports league, and it is sad that some opportunities must be sacrificed based on a cost-benefit analysis. However, I have faith in the NHLPA and fans alike that we won’t cave-in to another lockout, another one-sided CBA and another missed Olympics. It remains to be seen what direction the NHL will take in the years to come, and hopefully it’s the right one.