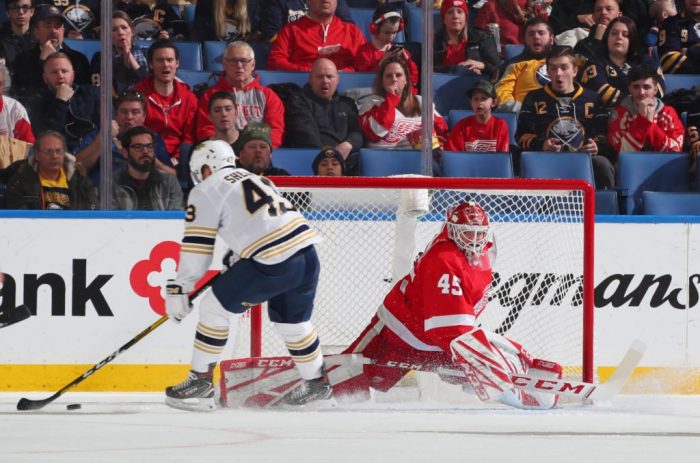 If you’ve been paying any attention to the NHL this season (that is, before the league was put on pause by one global pandemic), you might have heard about just how bad the Detroit Red Wings have been this year. The most casual hockey fan, in fact, would probably be able to tell you just how bad they’ve been. Now, teams have bad seasons every so often, but what Detroit has managed to accomplish (?) record-wise this year is pretty astonishing – in the worst sense of the word. One of the most glaringly ugly statistics for this year’s Red Wings squad is its goal differential.

Goal differential isn’t so black and white, and there’s a lot of layers that go into a team giving up goals during a game. Let’s look at just a few of those layers and try to unpack the true weight of the Red Wings’ goal differential in 2019-20.

It’s worth mentioning that while the NHL has plans to return to play as the dangers of COVID-19 wane in the coming months, the Detroit Red Wings are not in those plans. Any RTP plan was unlikely to involve them anyway, and the Red Wings are one of just eight teams excluded from play-ins and playoffs.

So, for all intents and purposes, while the 2019-20 NHL season isn’t over yet, the Detroit Red Wings’ 2019-20 campaign is. Without further ado, let’s jump right into things.

Detroit finished this season with a -123 goal differential. Surprisingly, that abhorrent mark is far from the worst ever recorded; that honor goes to the 1974-75 Washington Capitals, who recorded a -265.

This -123 mark still ranks in the bottom 20 all-time worst goal differentials, which, for a league with 100+ years of history, really says something.

A -123 from this year’s Detroit squad is effectively the worst recorded in the salary cap era, a record previously held by the 2014-15 Buffalo Sabres, who ended that season with a -113. But that awful Sabres squad tanking for Jack Eichel played a full 82 game season, while these Red Wings played only 71 games.

The Red Wings could have actually had a much worse goal differential had they finished out the regular season. Let that sink in.

I originally wanted to write a piece highlighting the goaltending situation in Detroit about the performance of their two goalies, Jonathan Bernier and Jimmy Howard, and what goalie prospects the organization had in Grand Rapids with the AHL Griffins and elsewhere.

Such a piece wouldn’t be fair to Bernier and Howard, though, and wouldn’t do justice to dissect the Wings’ ailments this season. After all, goalie statistics are typically a reflective symptom of a team’s lackluster performance, not its cause.

Jonathan Bernier earned the larger share of starts, through both circumstance and solid play. Bernier played 46 games, and went 15-22-3. He posted a 2.95 GAA, .907 SV%, and 1 SO. All things considered, this is actually a remarkably solid stat line for the Wings’ starter.

However, the stat line of Bernier’s counterpart, Jimmy Howard, does.

Jimmy Howard has never been an immovable force in net, but to be fair, he has had some pretty solid years, at least early on when Mike Babcock was still behind the bench and Detroit was still riding their eternal playoff streak. But these stats are bad. Really bad.

Winning just 2 games in 27 starts is unthinkable, and the 36-year old goaltender has had injuries to deal with, too. While the amount of goals given up isn’t entirely reflective of the goalies on the team, Howard’s play this year was definitely a contributing factor to the lack of success.

Another contributing factor would be special teams. Detroit ranked dead last in league-wide penalty kill, at 74.3%. This means that, on average, the Wings gave up a power play goal once every four kills. Not good. They also ranked 29th in power play percentage, with a lackluster 14.9% success rate.

It’s worth mentioning that the Red Wings gave up 17 empty net goals this year, which does add to the negative goal differential but might not be truly indicative of their quality of play in those situations. However, when weighing the fact that in 35 empty net attempts the team scored only 8 times, this could also show that they were bad in that situation, too.

Plus, their 17 goals allowed during empty net attempts was the most in the NHL, and gave them a -0.257 success rate in that situation.

The Wings ranked right ahead of the play in/playoff-bound Winnipeg Jets (42.74%) and right behind the also play in/playoff-bound New York Rangers (45.88%). The difference is that both the Jets and the Rangers have stud goalies in Connor Hellebuyck and Igor Shesterkin, and dynamite forwards like Kyle Connor, Mark Scheifele, Artemi Panarin, and Mika Zibanejad.

At the end of the day, it probably suffices to say that the 2019-20 Detroit Red Wings were pretty darn bad. Detroit was on pace for (and ultimately finished with) one of the most lopsided losing records and worst points totals in NHL history, both comparative to the worst teams in the salary cap era, and in past eras, too.

The goal differential metric has a lot that goes into it, and a lot to unpack, so I hope that anyone reading this now understands a little bit more about what made this statistic so notable, and what made this Red Wings team so poor.

It’s OK though – the Detroit Red Wings always have the first overall pick in the 2020 NHL Entry Draft to look forward to (Bonjour, Alexis Lafrenière…).