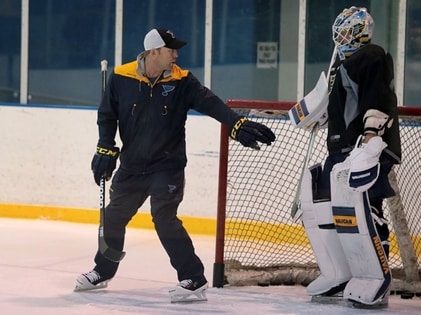 Let’s come right out and say it: a regular hockey practice is not going to make a goalie better. To elaborate, goaltenders do not get the same benefits that players do from tired skating and shooting drills, and unfortunately, they’re not supposed to— yet not many youth organizations and coaching staffs seem to care. Here, my goal is to give a concise, yet informative point of view to help coaches understand how to work with and improve their goalies.

A significant portion of a goalie’s game, especially as they advance in age groups and in skill level, relies on their skating and their ability to play the puck. Nine times out of ten, young goalies overlook this part of their game, usually at no fault of their own. While some coaches and goalies alike may think it more beneficial to have them take shots or something of the sort, I would encourage them to instead skate with the team for any skating drills, as even though they may not be tailored for a goalie, they can always help you on your feet.

Additionally, goalies should do skating of their own, with a goalie coach who knows what specifics should be practiced. There are endless goalie-specific skating and footwork drills, both on your feet and in butterfly, that can be practiced in and around the crease. Working on being better on your feet a little bit every day makes you a better goalie and stronger with your fundamental skills.

A second area of strength that coaches should encourage and practice with their goalies is playing the puck. Around Bantam-age, goalies should be able to confidently come out and play loose pucks behind the net, and should have the handle to be able and rim it or pass it to their players. Not only does it help in hectic game situations, it actually helps in the goalie’s overall play by fostering a wider breadth of options in-game.

Next, a huge suggestion to coaches and parents is to get your goalie some one-on-one private sessions with a goalie coach. Personally, I was never gifted with a goalie coach by my respective organizations, and had to book private lessons on Saturday mornings with a local coach. Albeit a typically expensive endeavor, you can probably find one for cheap or for nothing at all looking in the right places.

The benefit of one-on-one sessions is that the goalie is the only player on the ice. No longer are they ignored or used as a prop for players, they are paid full attention and become a better goalie after every session. Every hour-long private session I had left me improved and confident, giving me new things to try in practice and new ways of playing my position. I was given attention and ideas never even thought of by regular coaching staffs, let alone any youth organization. I urge coaches to provide goalies with private sessions or the resources to book them. It can only help everyone.

As mentioned before, goalies will not always benefit from tired skating and shooting drills. This is why if coaches want better goalies, they have to keep the drills fresh. That means every practice should bring something new. This is not only a benefit for goalies, but also players as well. It keeps everyone on the ice engaged and interested, and discourages boredom and cheating. Try new shooting drills: faster ones with more shots, unconventional ones with the net facing the corner, odd-man games and small area games, etc. Coaches should know when to change things up and that, just like lifting weights, you have to work on a different area every time for the best results.

Last, but definitely not least, my most important piece of advice: A coach should never try to overhaul the style of a goalie. Instead, they should enhance it. This does not mean you can’t tell them to tweak their glove position or center the blade of their stick with their chest or angle their blocker a certain way. By enhancing instead of overhauling, I am encouraging coaches to play into the fundamental knowledge of their goaltender. Especial to older goalies in their teenage years, fundamental technique is dangerous to change, and contrary to popular belief, does not need to be changed at all. Would Henrik Lundqvist’s goalie coach have the nerve to make him play like Jonathan Quick? Would a goalie coach look at Dominik Hasek and say “Nope, too unconventional, change it.”? Every goalie is unique, and cannot be normalized into how one person thinks they should play. So remember: enhance, not overhaul.

The focal point of all of a goalie’s experience is the attention they receive from coaches. If overlooked, they cannot thrive. If treated like a prop, they cannot improve. Coaches need to pay attention to their goaltenders as individuals and as unique projects that can be mastered through the proper processes. In conclusion, what most youth organizations do now is not going to cut it. Coaches need to reassess how they approach the most important player on the ice, and take it from there.