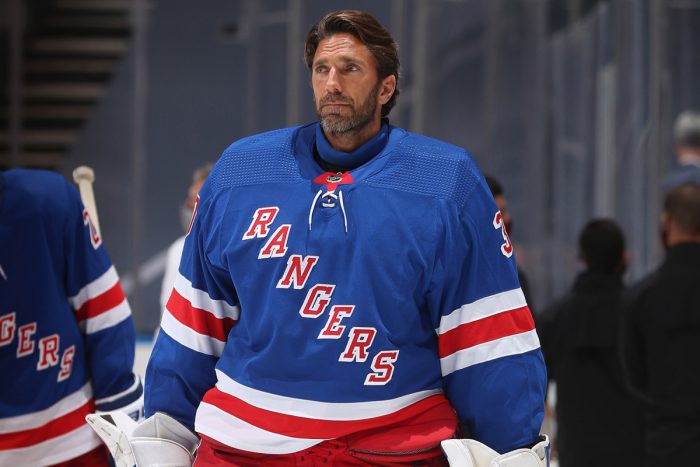 As Henrik Lundqvist sat from the bench for Game 3 of the Stanley Cup Qualifiers and watched his New York Rangers skate to a 4-1 loss to get swept by the Carolina Hurricanes, he knew that he very well could have played his last game for the team. The sullen expression on his face as the camera panned in on him near the end of the game said as much. The man they call “The King,” who has been the face of the franchise for the last 15 years, might have finally sang his last tune.

This has been a long time coming. Rangers fans have seen a gradual decline in the play of Henrik Lundqvist, not for lack of effort, but for the effects of progressing age and an inexperienced, rebuilding lineup in front of him.

The 2019-20 season saw Alexander Georgiev and Igor Shesterkin emerge as a stud tandem in goal, and the King seemed to have lost his keys to the castle.

Before the NHL Pause took effect on March 12th due to the COVID-19 pandemic, Hank started just 1 game out of 19 down the stretch, in favor of his younger counterparts.

All the while, though, he remained an exemplary teammate, and a better backup.

His stoic countenance sitting on the bench while he’d much rather be playing isn’t the first time he’s impressed the hockey world through his character. This is the same franchise goalie who, when President Glen Sather and General Manager Jeff Gorton wrote a letter to fans announcing a painful rebuild, decided to stay and finish his career in New York even after being given the choice to be traded.

Henrik Lundqvist is truly a generational talent – the face of a franchise.

In December 2013, Lundqvist signed a 7-year contract extension keeping him in a Rangers sweater until 2021. It was clear that this would be the last deal of his career. In 2014, he carried the Rangers to the Stanley Cup Finals, before being defeated in 5 games against the Los Angeles Kings.

Every season since then, his numbers have gotten progressively worse. In 30 games played this past season, Lundqvist posted career worst numbers: a 3.16 GAA and a 905 SV%, putting up just 10 wins. Then, it looked like the rookie sensation Shesterkin was slated to start in Game 1 of the Qualifiers this past week, and by all means, he was.

But when Igor Shesterkin was deemed “unfit to play” for Game 1, Henrik Lundqvist was given the nod. The pressure and responsibility is a feeling he’s used to.

Facing 37 and 34 shots in Games 1 and 2 respectively, Lundqvist was under constant fire. The Rangers did not play well…at all. Despite a constant barrage of high percentage shots and a high GAA, Lundqvist still managed a .901 SV%. This wasn’t good enough to secure a win, though, and he was benched in Game 3 for a now-healthy Shesterkin. And we all know what happened next.

With clear emotion in his voice, longtime teammate Chris Kreider said Lundqvist “battled his ass off like he always does, he deserved better from us.”

The situation that the New York Rangers and Henrik Lundqvist find themselves in is a delicate one. The 38-year old Swede still has one year left on his contract, and a hefty $8.5-million cap hit. In the Rangers’ cap situation, that’s just not a cap hit they can carry right now. Especially for a third-string goalie.

The team, then, is presented with two options: they can either trade him (if he decided to waive his No-Move Clause), or they could buy out the remainder of his contract.

I would eliminate the possibility of a trade, since Lundqvist has made it abundantly clear he is a lifelong Ranger, and the team would likely have to retain at least half of his cap hit ($4.25-million) to get a trade done. Even with that, there don’t seem to be any teams that would trade for someone like Lundqvist even at that discounted price tag.

That leaves the only other possible option of a buyout. Since the traditional buyout period has been postponed to either October 8th or 6 days after the Stanley Cup Final ends, the Rangers have some time to think about what decision they want to make. But they likely already know what decision that is, and dragging it out any longer would be the wrong thing to do, especially when the player in question is Henrik Lundqvist.

Additionally, if the Rangers bought out Lundqvist, they would take on more dead cap space, of which they already have enough, giving them a smaller ceiling to work under. It might not be in their best interest.

All of this talk and speculation about Hank’s future in New York is for the here and now. But years from now, when Rangers fans look with fond memories upon teams and players of the past, none of the minutiae of figuring out financials will matter.

What will matter – is the legacy of Henrik Lundqvist.

The King owns every important all-time goalie record for the New York Rangers. And for a team that has iced the likes of Mike Richter, Gump Worsley, and John Vanbiesbrouck, that is no small achievement. Suffice it to say that Henrik Lundqvist is in the conversation for the best Rangers player, not just goalie, of all time.

Whatever happens with Henrik Lundqvist and his contract remains to be seen, but it seems to be the general consensus that he has played his final game as a New York Ranger. Igor Shesterkin and Alexander Georgiev signal the next era of goaltending in New York, and Lundqvist leaves a dignified legend, having had one last crack at the Cup this year.

In all, Henrik Lundqvist isn’t the worst a 7th round, 205th overall pick could get you.