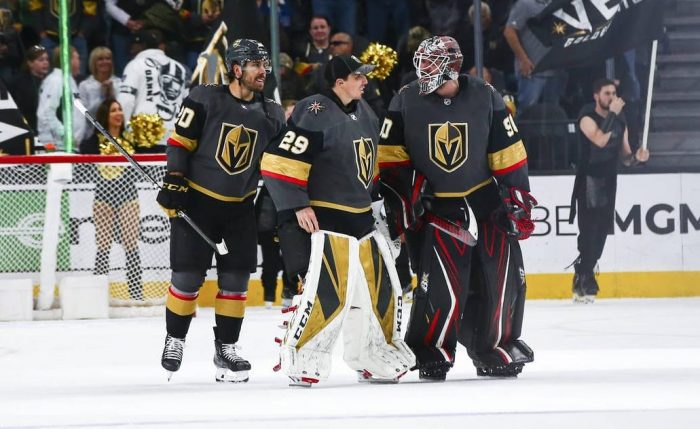 The Vegas Golden Knights are just one NHL team that traded for a new goaltender at the February trade deadline, and while they haven’t had the opportunity to reap the rewards of that trade for, well, obvious reasons, their new goalie had a handful of games to show what he’s got before the NHL pause in response to the COVID-19 pandemic. This article is the second of my ‘Grading the Goal’ stories this season – the first one was on the Colorado Avalanche, posted earlier this week. Click here to read that story in full. Now, here’s a look at where the Golden Knights stand with their goaltenders.

Since their inaugural season in 2017-18, the Vegas Golden Knights have had their guy in goal – no ifs, ands, or buts. Marc-Andre Fleury, the grand prize selected from the Pittsburgh Penguins in the 2017 NHL Expansion Draft, has been the marquee player for the Golden Knights since he first stepped in the crease for them.

“Flower,” as he is referred to by fans around the league, was the first-overall pick in the 2003 NHL Entry Draft by the Pittsburgh Penguins. He was part of three Stanley Cup Championship teams with the Pens, and became a member of the Golden Knights in the summer after the third Cup win.

Fleury’s career stats in 847 games played are a 2.57 GAA, a .913 SV%, and 61 shutouts. Toward the end of his tenure in Pittsburgh, Flower lost his luster a bit, and was considered a downward-trending goalie. His first season in Vegas shut all the negative talk up, though, as he led the first-year expansion franchise to the Stanley Cup Finals behind his incredible play, eventually losing to the Washington Capitals in six games.

Marc-Andre Fleury started his career with the Golden Knights in amazing fashion. Fleury posted a 2.24 GAA and .927 SV%, and helped the team to the Cup Finals. Since then, though, the Golden Knights haven’t made it back there – they lost to the San Jose Sharks in the first round last season, and have had this season’s aspirations interrupted with a global pandemic.

The 35-year old Fleury has also shown hints of a decline since that last Cup run. His second season in Vegas saw a decline in both goals against average and save percentage, to a 2.51 GAA and a .913 SV%. This 2019-20 season saw Fleury experience another steep regression in stats, worsening to a 2.77 GAA and a .905 SV%.

To put the blame for the Golden Knights’ struggles this season all on Fleury’s lackluster play would be a disservice to him, and to the club’s actual troubles. However, Fleury is undoubtedly one of the major concerns surrounding this Vegas team.

The downside for him and the Golden Knights is that shortly before the NHL pause, they were starting to pick up some points in the standings and cover some ground for a playoff push, but the 2020 Stanley Cup Playoffs are anything but certain at this point.

The most exciting thing to happen in goal for the Vegas Golden Knights since their inaugural season, though, isn’t Fleury coming around this season, but the trade pulled off by General Manager Kelly McCrimmon for Robin Lehner. Robin Lehner is a hulking six-foot-four, 240 lb. 28-year old goaltender poised to be entering the prime of his career soon.

Lehner’s breakout year came in 2018-19 with the New York Islanders, a year which saw him win the Bill Masterton Memorial Trophy and the William M. Jennings Trophy, and post the best stats of his career, by far: a 2.13 GAA, .930 SV%, and 6 shutouts.

Lehner signed a one-year deal with the Chicago Blackhawks last summer, and had ample opportunity sharing the crease there with Corey Crawford. In 36 games played this season, Lehner has won 19 games, and posted a 2.89 GAA, a .920 SV%, and one shutout.

The significant stat there is his save percentage, which ranks 10th in the NHL among eligible goaltenders, and is a shining achievement for playing most of the year with a poor Blackhawks team.

Lehner is on the fifth team of his career, and has had trouble negotiating a long-term contract since his last one with the Buffalo Sabres, after coming out publicly with his mental health struggles while playing in the NHL. If his play were the ultimate dictator of what he deserves, though, Lehner could very well earn himself that long-term deal with the Golden Knights and play successor to Fleury.

Both Dansk and Sparks have seen NHL action, both have proved to be serviceable backups in the league, and both have posted similar statistics this year in their respective bodies of work. That kind of depth is exactly the kind of insurance that Vegas management has worked to secure for the organization.

The remainder of the 2019-20 AHL season was just officially canceled, per league communications and Commissioner Dave Andrews, and will resume this fall for a fresh 2020-21 season. By then, Vegas will have a new AHL affiliate based just outside of Las Vegas in Henderson, Nevada.

The verdict in grading the goal for the Vegas Golden Knights is positive. The one-two punch of Marc-Andre Fleury and Robin Lehner, as it stands, is arguably one of the best in the NHL at this point in time. Fleury still has the chance to come around and improve his play for the remainder of his contract, and Lehner is more than capable of stepping in and playing lights out when called upon, while acting as a totally viable option for the team as their next starter.