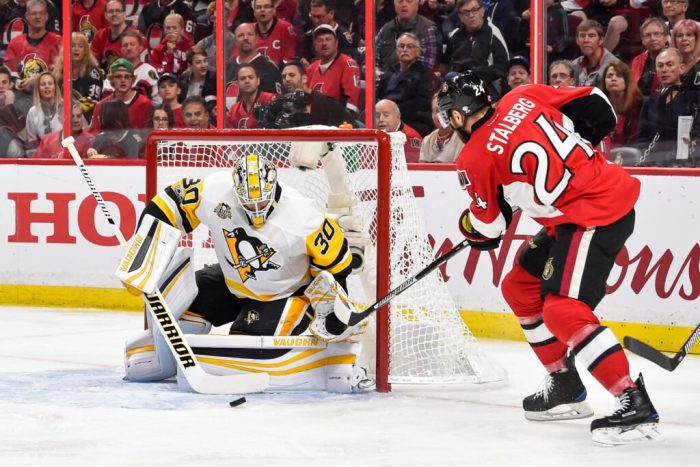 For the NHL team that finished second from worst in league standings last season, it was time to make some changes and force some turnover in the roster. The Ottawa Senators have been in the midst of a full rebuild for a few years now, and it was finally time for them to part ways with longtime starting goaltender, Craig Anderson. Anderson teetered the line between being a “really good” goalie and a “just okay” goalie almost his whole time in Ottawa, and given his age, probably wasn’t going to pitch playoff-worthy numbers in the coming years. But an injection of some young, Cup-caliber blood in the crease might be just what a young, promising prospect-filled Sens team needs to take that next step.

For a staggering ten seasons, Craig Anderson was “the guy” in net for the Ottawa Senators. Well, technically 9 1/2 years, since he began the 2010-11 season with the Colorado Avalanche before joining the Sens. Since he arrived, though, it’s been all Anderson, and then a little Andrew “Hamburgler” Hammond, and then some more Anderson.

There’s a new goalie in town, though, and Ottawa ain’t big enough for two career starters. That new goalie is Matt Murray.

Back on October 7th, the Senators traded for goaltender Matt Murray, in exchange for Jonathan Gruden and a 2020 second round pick in the NHL Entry Draft. Soon after, the team signed Murray to a four year contract through 2024, at a $6.25-million AAV with a modified no trade clause (M-NTC).

Before coming to Ottawa, the 26 year old Murray had spent his whole career in the Pittsburgh organization. Standing at six-foot-four, the big goalie has put up big performances ever since he broke into the NHL back in 2016.

Murray led the Penguins from the goal crease to back-to-back Stanley Cup Championships in 2016 and 2017, his first two seasons in the league. Talk about a good way to begin your career. His best stats came in his first year as a full-fledged starter, in 2016-17, where he played 49 games, winning 32 of those decisions. Murray posted a 2.41 GAA, .923 SV%, and four shutouts en route to his second Cup win in as many years.

Setting such a high standard for yourself as a rookie can often come back to bite you, as practically nothing you do will live up to capturing the main desire of every NHL player to ever touch the ice: a Stanley Cup championship. In Murray’s case, this again rang true. Each season Murray spent with the Penguins, his stats declined.

Ottawa’s options as far as backup goalies go are actually pretty decent. In fact, the likely backup, Anders Nilsson, has almost as much NHL experience as Murray does.

Anders Nilsson has spent the last two seasons with the Ottawa Senators, and the 30 year old has 161 career games played to his name. In those contests, he is 59-74-15, with a 3.06 GAA, .907 SV%, and six shutouts. The numbers could be better, sure, but he has played for some pretty bad teams in the past (and the recent past).

Like I mentioned before, the Senators are at no loss for options in the backup role. While Nilsson is almost a lock for that second NHL spot behind Matt Murray, there are other candidates to choose from. Among those other candidates are Marcus Hogberg, Joey Daccord, and Filip Gustavsson.

Gustavsson is a 22 year old with no NHL experience, so he remains a long shot to make the roster, and is better suited in the AHL or ECHL ranks for development. Joey Daccord has just one game of NHL experience, in which he is 0-1, giving up five goals against. The 24 year old Boston, Mass. native was a seventh round pick in 2015 by the Sens, and has a good shot at starting at the AHL level in 2021.

The only other goalie who might have a shot at NHL action this year is Marcus Hogberg. Hogberg played in 24 NHL games last season, going 5-8-8 and posting a 3.12 GAA and .904 SV%. He has 28 career games played at the NHL level, and has seen success in the minor leagues.

If Sens management wanted to take a shot at one of their younger guys, Marcus Hogberg would be the one.

Alright, I know I mentioned a lot of names there, none of which you’ll probably see suit up for the Sens, barring injury next year. But it’s good we introduced them anyway, since they’ll most definitely be seen in the Sens minor league system.

For Ottawa’s AHL affiliate Belleville Senators, it’s looking like Marcus Hogberg and Joey Daccord will be the starter and backup. If they wanted to roll with three goalies, Gustavsson would be next in line. Last season, the three goalies they rostered were Daccord, Gustavsson, and Alex Dubeau – Dubeau played just three games, so it’s hard to see him getting playing time over the others.

That gives the Senators organization a lot of options when it comes to their ECHL affiliate, the Brampton Beast.

With Daccord likely to remain in the AHL, Gustavsson could earn a bulk of starts in Brampton instead. Look for Dubeau to carry the rest of the weight, and whoever else they roster this year to fill in the gaps.

With some new blood and so many goalies in the prospect pipeline, all with something to prove, some might say the goaltending position is a thin one for the Ottawa Senators. While a case can be made supporting this, I think that they are actually in a better position goaltending-wise than many other teams in the league, especially in their division. It would be nice to have a stronger backup NHL goalie, though.

The plan looks to be this: ride the Matt Murray train as long and as often as possible, and see if he can’t return to a near-elite level like he’s shown to be capable of in the past. It’s quite possible that he could have simply needed a change of scenery to shake things up and return to form; after all, Penguins General Manager Jim Rutherford expressed wishes to keep him in Pittsburgh, were the Pens not crushed by the salary cap.

It remains to be seen how the AHL and ECHL goalies will fare, but the Senators have one thing going for them: they seem to have drafted a large number of goalies in the past few drafts, which is never a bad idea. It’s always a good habit to keep up.