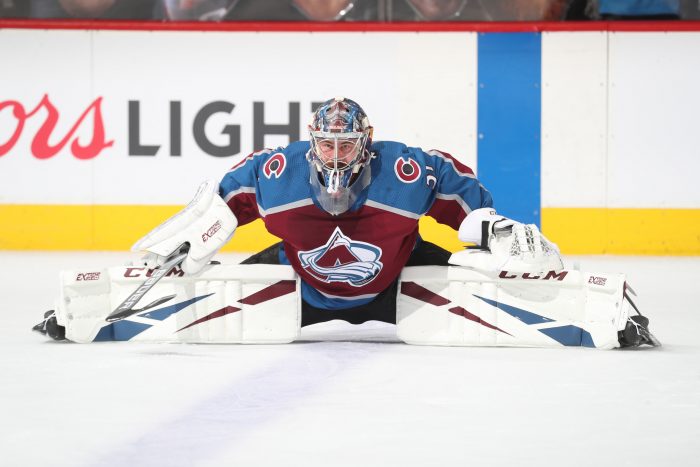 When it comes to goaltenders, the Colorado Avalanche are intriguing – the Avs have found a way to get by without any one of their goaltenders in the last number of years being considered among the best in the NHL. The closest they’ve been to having that was Semyon Varlamov, and even then, that only lasted for a year or so, when Patrick Roy was behind the bench for his first season as Head Coach (remember that?). Philipp Grubauer and Pavel Francouz are the two NHL goalies the Avalanche are currently rostering, and this season hasn’t exactly been the most predictable between the pipes. Here’s a look at where the Avs stand with their netminders.

Philipp Grubauer was supposed to be the goalie of the future. And for all intents and purposes, keeping him around now and giving him his time to shine is probably the only way to see if this plan will play out like it was supposed to. Coming off a Stanley Cup Championship with the Washington Capitals in 2018, though, Grubauer hasn’t been Cup-caliber since.

The problem is, he just hasn’t had a fair shake – the guy can’t seem to stay healthy.

Grubauer started over Braden Holtby in Washington for a lengthy regular season stretch leading into the postseason, and even started the first two games for the Caps in the 2018 Playoffs. He was replaced by Holtby after two straight losses, and the rest is history, but Grubauer made a name for himself that year, earning a 3-year contract in Colorado because of it.

The 28-year old Rosenheim, Germany native has just one year left on that deal.

Despite these pretty great numbers displayed over a considerable sample size, the biggest concern about Grubauer as a starter is that nagging injury history. Because of this, other goalies like Pavel Francouz have been able to step up to the plate.

Pavel Francouz came out of nowhere, and I mean nowhere. The 29-year old Czech native wasn’t even drafted, but was signed in 2018 as a free agent by the Avalanche. And now, the undersized, right-handed-catching goalie seems poised to keep a permanent spot in the big leagues, as a starter or a backup to be determined.

In the 2019-20 campaign, Francouz is 21-7-4 in 34 games played, with a 2.41 GAA and .923 SV%, ranking 7th and 5th in the league, respectively, among all eligible goaltenders. This is a pretty considerable feat, and echoes notable goalie breakout years of the past, like Viktor Fasth’s.

The Avalanche, mired in uncertainty about their situation in goal, looked to make a move at the February trade deadline, and so they did. Enter Michael Hutchinson, the talk of the town in Toronto this past season, for all the wrong reasons.

Hutchinson was part of a problematic goalie situation with the Maple Leafs, and was bound to be shipped out to hopefully find some success elsewhere. And believe it or not, he actually hasn’t been half-bad with the Avs.

Michael Hutchinson is a 30-year old goalie, whose body of work makes me feel pretty safe calling him a journeyman backup in the NHL. Hutchinson is a big, right-handed-catching goalie who has played for the Winnipeg Jets, the Florida Panthers, the Leafs, and now the Avalanche.

Hutchinson’s biggest body of work in a single season came back in 2014-15 with the Jets, before Connor Hellebyuck came along, and when then-starter Ondrej Pavelec was regressing big time. In 36 starts that year, Hutchinson won 21 games, and posted a 2.38 GAA, .914 SV%, and 2 shutouts.

Numbers like that are what earned him the opportunities he has gotten, and are what he needs to stay in the NHL moving forward. Having a goalie like Hutchinson in the system is a low-risk, high-reward move. Hutchinson is currently with the Colorado Eagles in the AHL.

Speaking of the AHL, the Avs’ affiliate Eagles have a number of promising young prospects in goal. The majority of starts have been split between Adam Werner and Hunter Miska. Werner, a 22-year old 5th-round pick of the Avalanche in 2016, has played 31 games this season. He has a 2.92 GAA, .909 SV%, and 2 shutouts.

Miska has played 26 games this year, and has a 2.48 GAA, .924 SV%, and 2 shutouts. He previously played in the Arizona Coyotes organization with the AHL’s Tucson Roadrunners, and in my personal opinion, offers the most upside of any Avs goalie prospect. Antoine Bibeau is also in the system, and has played two games for the Eagles this season.

The Colorado Avalanche have a number of questions in their organization that surround their situation between the pipes, but I truly believe they are in a pretty good place right now. Francouz’s breakout year has given Grubauer some time and space to return to full form, Hutchinson has provided that veteran backup presence in the room, and their AHL and ECHL goalies are all having pretty good showings.

The verdict in grading the goal here is positive, and I expect the savvy management team led by Joe Sakic to have a pretty good handle on their goalies in the near future, and for years to come. Whether Grubauer emerges as the go-to guy or not, the team is in pretty good hands, and has plenty of options in front of them.