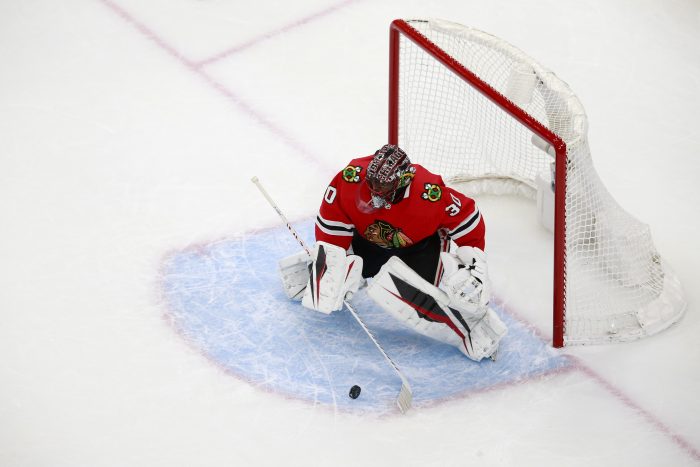 In the early-to-mid 2010s, no team in the NHL could mess with the Chicago Blackhawks; they became the envy of the league, winning three Stanley Cups in 2010, 2013, and 2015, icing the same core of players each time to capture the hardest trophy to win in all of sports. A big part of those Hawks teams was their goaltending – first Antti Niemi, and then Corey Crawford thereafter. But the goalie situation has changed in Chicago, as has the look of their once-mighty roster. This edition of ‘Grading the Goal’ is centered around the 2021 Chicago Blackhawks.

I mentioned Corey Crawford’s name, so we’ll make sure to cover his departure from the get-go. Crawford had played in the Chicago Blackhawks organization for his entire career, and broke into the league first as a backup to Antti Niemi, and then as a full-fledged starter, winning two Cups in 2013 and 2015 as the number one goalie for the Blackhawks.

He’s faced injury issues and declining play for the past three seasons, though, and as the reality of the need for a retooling of some sort (the team won’t say rebuild) becomes more apparent, it was naturally time for the club to part ways with him and move in a new direction.

On October 9th, 2020, Corey Crawford signed a two-year contract with the New Jersey Devils, carrying a $3.9-million AAV and a modified no trade clause (M-NTC). The Devils have called him a “marked improvement to Cory Schneider,” showing they have full confidence in the veteran’s abilities to continue playing at a high level.

With their longtime starter now gone, a gaping hole is left on the Blackhawks roster. It’s one they claim to have a solution for, but it’s a gaping hole nonetheless. Chicago is in dire need of a starting goaltender.

Enter Malcolm Subban and Collin Delia. These two young goalies are going to be the ones vying to fill the hole Crawford left, and despite a small body of NHL work between the two of them, they have the confidence of the organization to make it happen.

Collin Delia, a 26-year old native of Rancho Cucamonga, California, has just 18 games of NHL experience to his name. For a guy who has a shot at splitting 70+ games with his goalie partner, that’s…not a lot. In those 18 games, Delia is 7-5-3 with a 3.65 GAA and .906 SV%. That doesn’t look like anything special, but a save percentage above 90% with that high of a goals against average is what should be paid attention to (it’s actually pretty impressive).

With so little NHL experience under his belt, though, we really only have minor league statistics to go off of. The un-drafted, six-foot-two goalie spent most of the last three seasons in the AHL with the Blackhawks’ affiliate Rockford Ice Hogs, but never with a big workload.

Though, perhaps for lack of a better choice, the Chicago Blackhawks signed Delia to a two-year deal worth $1-million AAV.

For a time, it might have looked like Collin Delia was slated to be the starter for the Blackhawks going into 2021. This, of course, as it looked more and more likely as Corey Crawford was going to be shipped out, which he eventually was. So as any smart management would do, Hawks brass went out and got another goalie to shore up the depth chart before it became more difficult, this guy with just a bit more NHL experience than Delia. Enter Malcolm Subban.

Malcom Subban is also 26 years old, but has had quite a different introduction into the NHL than his new partner Delia. The Toronto native was drafted in the first round of the 2012 NHL Entry Draft by the Boston Bruins, but was never able to earn a roster spot with the team behind starter Tuukka Rask. And when he became a Vegas Golden Knight in their inaugural season in the league, a lot of people still harbored doubts about his ability.

Fast forward to the 2017-18 season when Marc-Andre Fleury suffered an injury, and Subban was tasked with stepping in to keep the young expansion team afloat. As we all know, Subban did much more than that, in fact, he wound up winning 11 of his first 13 games in the NHL with them. Since then, Subban had served as the backup to Fleury before being traded to the Blackhawks, playing just about 20 games in each of his three seasons with the club.

His career best numbers came back in the 2017-18 season, with a 2.68 GAA and .910 SV%. In 66 games of NHL experience, Subban is 30-23-7, with a 2.97 GAA, .899 SV%, and a single shutout. His numbers have consistently decreased year-over-year since he posted career highs, but then again, so did Fleury’s. So at the end of the day, can Subban be blamed for his decrease in level of play? Can Fleury? That could just be an indictment of the team in front of them, too.

At the end of the day, though, Subban’s career as a Golden Knight has come to a close, and he looks ahead to his shot at becoming a full-time starter in the NHL. He’ll do so while signed to a two-year contract worth  $850K AAV.

The Chicago Blackhawks situation in goal looks a whole lot different than it did last year, and, quite frankly, as it has for the last decade. It’s a situation they’re not used to of late, and unfortunately, it’s not an ideal situation. Their two likely NHL goalies combine for just 84 games of NHL experience.

I wrote a few weeks ago about how inexperienced the new  Pittsburgh Penguins goalie tandem is, and believe it or not, this new Blackhawks tandem is even more inexperienced than that. And this problem doesn’t just stay in the NHL; this problem trickles down to the AHL and ECHL pipeline, too.

It’s hard to be critical of any minor league goalies since the AHL is a different animal entirely than the NHL, but those stats don’t necessarily encourage even the most optimistic Blackhawks fan. In the ECHL, the Indy Fuel are left with goaltenders Charles Williams and Dan Bakala. Williams is a former Hobey Baker Award nominee in the NCAA during his senior season with Atlantic Hockey’s Canisius College, and previously played in the Los Angeles Kings organization.

After that, there’s not much to tell. The bottom line is this: the Blackhawks roster is quite possibly as thin as it’s been since before 2010, and that is not a good thing. And what they are left with in goal as far as prospects go is dismal compared to the standard they set for themselves over the past decade. The only upside, I’d reckon, is that they have so little money tied up in goalies, it’s actually kind of hard to believe. Between Collin Delia and Malcolm Subban, the Blackhawks are only paying their goaltenders a collective $1.85-million. That’s far lower than the near-or-past $10-million that the Montreal Canadiens have tied up in their goalies, or the Vegas Golden Knights, or even the San Jose Sharks now. That could potentially work in their favor in securing their next stud goalie.

For now, I’d expect Malcolm Subban to be given every chance to succeed in a starting role, since he is the more experienced goaltender by far. I wouldn’t count Delia out, though, since he has been in the Blackhawks organization his whole career and has already played for the team more than Subban has. When the 2021 season rolls around, Chicago will be a team to keep an eye on, and their crease will be an interesting area to watch, too.