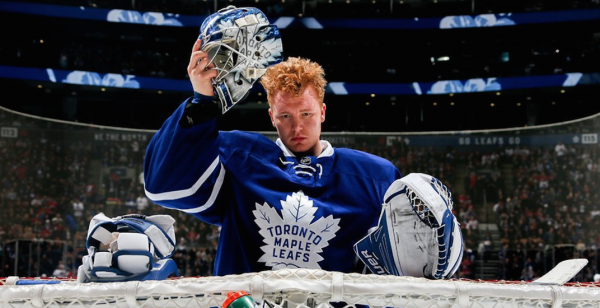 Frederik Andersen is currently playing in his second season with the Toronto Maple Leafs, and despite his obvious success and stellar play, has still managed to fly under the radar of many in the hockey community. For all he has done in Toronto and beforehand with the Anaheim Ducks, Andersen might very well be the most underrated goaltender in the NHL. Here’s a look into his recent breakthrough as one of the league’s best.

Frederik Andersen spent three seasons with the Anaheim Ducks, solidifying himself as a starter in the 2014-15 season, which saw him put up 35 wins and lead the Ducks to the Western Conference Final, where they would eventually fall to the Chicago Blackhawks. Andersen would spend another season in Anaheim before falling out of favor to promising rookie John Gibson, and being traded to the Toronto Maple Leafs to start the 2016-17 campaign.

In his first season as a Maple Leaf, Andersen helped turn around a team that had the first-overall pick just a year before, and led them into the playoffs for the first time since the shortened 2013 season. In 66 GP, Andersen went 33-16-4, with a 2.67 GAA and .918 SV%, with 4 shutouts. The Leafs would lose out to the Washington Capitals in 6 games, but if the run they made and the performance Andersen provided was any indication, he earned his spot as the starter for the year to come.

“Freddy” had a stellar regular season this year for Toronto. In a season where expectations were all of a sudden astronomically higher than the last, he answered to the pressure, making himself part of the conversation for the Vezina trophy as the league’s top goaltender. In 66 GP, he went 38-21-5, with a 2.81 GAA and .918 SV%, plus 5 shutouts.

That Goals Against Average is considerably high, but when coupled with the impressive .918 SV% and when looking at some of the deeper statistics, it is anything but subpar. Andersen faced the most shots against out of any goaltender in the NHL, with 2211 against. That is more than 130+ than the next goalie. He also had the most saves out of any goalie, with 2029. That’s more than 120+ than the next highest. He finised at 4th in wins among goalies, with 38, behind only Tampa Bay’s Andrei Vasilevskiy (44), Winnipeg’s Connor Hellebuyck (44), and Nashville’s Pekka Rinne (42). He also finished tied for 4th among goalies in shutouts (5).

What is so impressive about the season Andersen had is that he plays behind a considerably more porous defense than his elite competitors. This is obvious from the shots against measure. Despite consistently facing more shots than any other goalie night in and night out, he manages to win games and put up impressive numbers while doing so. Andersen is quietly one of the league’s top goaltenders, but is still underrated. It will take some time for people around the league to recognize his talent and success, but it will surely happen as he continues to solidify the Leafs as a contender.

Andersen and the Leafs finished the regular season 49-26-7, with 105 points, good for 3rd in the Atlantic Division and 7th overall in the league standings. Toronto will play the Boston Bruins in the first round of the Stanley Cup Playoffs, and are looking to make some noise, riding on the shoulders of their goaltender.