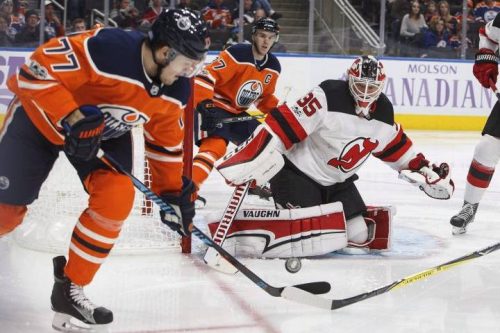 Since entering the NHL full-time in the 2010-11 season with the Vancouver Canucks and serving as Roberto Luongo’s backup in their cup run, Cory Schneider has quietly been one of the league’s top goaltenders. He has kept his head down and paid his dues as a backup, first behind Luongo then behind Martin Brodeur for part of his first season in New Jersey after being traded. For the last several seasons, however, Schneider has been the Devils’ go-to guy, and he is finally getting his due with the team.

Of the four seasons Cory Schneider has been the starting goaltender for the New Jersey Devils, the team has missed the playoffs in every one. Their playoff drought goes back five years, to the season before Schneider arrived. However, in each of these seasons, perhaps the only good upside about the Devils’ roster as a whole was, in fact, Schneider.

His busiest season to date came in 2014-15, which saw him start 69 games, and was the second worst record-wise in the past five years for New Jersey. However, for Schneider, it was but another season of excellent play, wherein he posted a 2.26 GAA and .925 SV%, adding 5 shutouts. In 58 games the following 2015-16 season, he was able to improve his GAA to an impressive 2.15 and keep his SV% high at .924, adding 4 more shutouts. Last season was a poor year for him personally, as the Devils bottomed out in the Metropolitan and he had a 2.82 GAA and .908 SV%.

At the end of last season, not many people pegged the Devils to make much noise in their division, let alone the NHL this season. But lucking out with the first overall pick in the 2017 NHL Entry Draft selecting Nico Hischier, and doing some retooling to their roster, the Devils have done exactly that. They sit atop the Metropolitan Division at 22-9-5 with 49 points. That is good for 4th overall in the NHL. Cory Schneider is once again having a season to remember, starting 28 of the Devils’ 36 games thus far, posting a 2.49 GAA and .923 SV% with a shutout to boot.

This is the first season in which the rest of the Devils roster has stepped up to the plate to get some wins for Schneider. For the first time since coming to New Jersey, Schneider has the goal support he needs: the Devils rank 7th in the league in goals per game, with a 3.1 average. The Devils now not only have one of the league’e best goalies, but also an offense that is clicking and a steady defense, with depth up and down the roster.

New Jersey is 7-2-1 in their past 10 games, and 6-0-1 in their past 7, with Schneider starting in net for each one, posting a .937 SV% in that stretch of games. He will make his season-high 8th straight start for the Devils as they face off against the Buffalo Sabres tonight, and he and the Devils look to continue their hot streak.