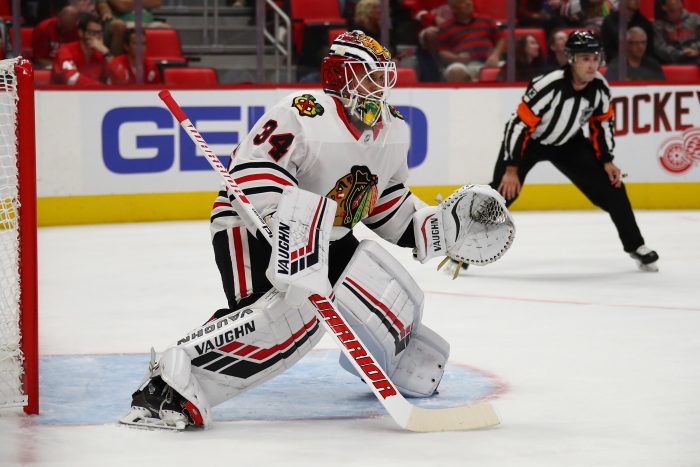 Heading into the 2020-21 NHL season, the Chicago Blackhawks were all set to roll with newly-acquired Malcolm Subban as their number one goalie, and it didn’t appear as though there were any goalie prospects in the system who could truly challenge for that role. That is, until Kevin Lankinen appeared on the scene. Whether by chance or by design, Lankinen has been given every opportunity to succeed this season, and that has paid off in big ways for the Blackhawks, as he has enjoyed one of the more surprising seasons for a rookie goaltender in recent memory.

Subban Was Set to Replace Crawford

For the past decade, the Blackhawks had enjoyed the luxury of a true number one goaltender: Corey Crawford. After the departure of Antti Niemi following the team’s 2010 Stanley Cup Championship, Crawford took over the crease, and the Blackhawks would not live to regret the decision to let him run with it. They would go on to win two more Stanley Cups in 2013 and 2015, both with Crawford at the helm. They remained contenders until a few years ago when it became clear a rebuild was coming, and it was time for them to part ways with their longtime starter.

Crawford’s departure left a gaping hole at the goaltending position for the Blackhawks, but it was one they felt they had prepared to address in the short term by acquiring goalie Malcolm Subban from the Vegas Golden Knights in a swap for Robin Lehner late last season. Lehner, who signed a five-year contract with the Golden Knight before this season, would have been a perfect replacement, but the Blackhawks decided the fit just wasn’t there.

By all accounts, the net was supposed to be Subban’s after Crawford’s departure in the offseason, no ifs, ands, or buts. But it hasn’t exactly gone that way, and Subban now finds himself the established backup instead. He has made his way into just 10 games this season, going 4-5-1 with a 3.14 goals against average (GAA), .903 save percentage (SV%), and a shutout. For where many projected the Blackhawks finishing this season, that is not such a bad stat line. But his counterpart, Lankinen, has impressed and outperformed him in almost every category.

Signed by the Blackhawks as a free agent back in 2018, Lankinen was not a highly-touted prospect coming to North America; in fact, he actually went un-drafted in the NHL. The Helsinki, Finland native didn’t make his NHL debut until this season, and at 25 years old, has been biding his time for quite a while now in hopes of cracking the Blackhawks lineup, let alone the starter’s crease.

Lankinen didn’t have an illustrious career developing in the minor leagues, either, and didn’t even play that big a share of games for the Blackhawks’ AHL affiliate Rockford IceHogs over the past two seasons.

In the 2018-19 AHL season, Lankinen played in 19 games, posting a 2.50 GAA and .910 SV%. Last season, he had 21 games played, and posted a 3.03 GAA and .909 SV%. These numbers aren’t too shabby for a goalie of his age and background, but they certainly aren’t nothing to stop and stare at, either. And that is just what makes this season’s performance from Lankinen so incredibly impressive.

In the 2020-21 season, Lankinen has played 31 games, going 16-11-4, and posting a 2.79 GAA, .915 SV%, and two shutouts. He has been one of the few key reasons why the Blackhawks, who were projected by analysts all around the NHL to finish at or near the bottom of league standings, have enjoyed a surprisingly successful season so far, even getting themselves into a playoff spot for a period of time.

For Lankinen, this is about as good as a season gets for a rookie goaltender. In the years to come, he will only get better, and will have every opportunity to prove his skill as an NHL-caliber goalie.

Through 43 games this season, the Blackhawks have a record of 20-18-5, good for 45 points in the standings and fifth place in the Discover Central Division™. The Blackhawks are just two points behind the Nashville Predators for the fourth and final playoff spot in the division.

In a season that many had already decided would be a painful one for the ‘Hawks, they have managed to outperform the Detroit Red Wings, Columbus Blue Jackets, and Dallas Stars. With Lankinen’s surprising, unexpected breakout season, they might have found a diamond in the rough, and could very well be set for the next ten years if he continues to develop his potential and play at a high level.