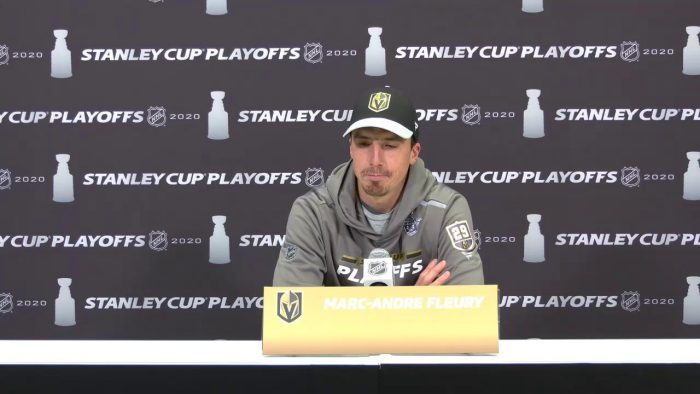 I feel like we’ve used this phrase a lot in the year 2020, but… I’m not sure we’ve ever seen this one before. “This” of course being the bizarre, caption-less tweet sent out by Allan Walsh, NHL agent and Co-Managing Director of Octagon Hockey, a couple of days ago. Walsh, longtime agent of Vegas Golden Knights goalie Marc-Andre Fleury, tweeted a graphic depicting Fleury in his goal crease with a sword shoved through his back, the blade reading “DeBoer.” DeBoer, of course, referring to Vegas Head Coach Peter DeBoer, who replaced Gerard Gallant midseason just a number of months ago.

There’s a lot to unpack here, so let’s start with a little bit of background.

Way back when in February at the NHL Trade Deadline, the Vegas Golden Knights acquired goaltender Robin Lehner from the Chicago Blackhawks, a move that clearly was meant to not only strengthen the goaltender position of the team, but also to motivate face of the franchise Marc-Andre Fleury to pick up the slack.

Not that Fleury was having a particularly bad season – the Golden Knights finished first in the Pacific Division – but by his standards, there were stretches during the regular season when he seemed to struggle a little bit. He finished the season with 27 wins in 49 starts, a 2.77 GAA, .905 SV%, and 5 shutouts. All things considered, those stats aren’t anything to scoff at.

In comes Robin Lehner, though, and it looks like the crease is up for grabs for the playoffs. And at the end of the day, Robin Lehner earned the right to be in that crease.

Lehner went 3-0-0 with Vegas after the Trade Deadline and before the NHL Pause in reaction to the COVID-19 pandemic. He then became the starter for the team in the Qualifiers and in the Stanley Cup Playoffs, starting 7 of 9 games so far, and winning 6 of those.

From a team perspective behind the bench, this entire situation is nothing out of the ordinary. We quite literally watched the same situation play out in New York with Henrik Lundqvist, and managed to make it out without controversy.

But then, swaths of hockey fans hopped on Twitter to catch up on news and scores, and were met with the now infamous image of DeBoer’s sword thrust through the back of Fleury.

Allan Walsh, the experienced agent who represents countless big-name NHL players, has always been outspoken – and fiercely protective of the players he represents. Thus, it’s not a betrayal of his character to tweet something like this, especially for a guy he’s represented since he was 15 years old.

What made this such a big deal, and so bizarre and out of place, was the timing of it all. Walsh’s tweet came just one day before the beginning of the second round, in which the Vegas Golden Knights are participating.

Talk about a distraction for the team.

The picture became widespread on social media, the team had to react to it and host a press conference, and Fleury had to face the embarrassment and address it to hockey media:

“This was maybe a way to defend me in this situation. I’m here to win with my team. To have success. That’s what matters.”

Fleury went on to say that he asked his agent to take the image down, which he promptly did. All is well, or at least that’s what people are being told.

Like I said at the start of this: I’m not sure we’ve ever seen this one before. And that’s precisely why I think this could have some real consequences.

The sad part about that is that Fleury allegedly had nothing to do with this. Robin Lehner said “Fleury didn’t do anything. It was his agent. If he wants to look unprofessional, go ahead. He looks terrible.”

Whether Fleury knew about the tweet or not (let’s give him the benefit of the doubt and say he didn’t), this situation could signal the end of his career in Las Vegas.

Marc-Andre Fleury has been the face of the franchise since being selected in the Expansion Draft and taking the cinderella squad to the Stanley Cup Finals in their inaugural season back in 2018. However, he’s 35 years old now, has one year left on his contract, and has fallen out of favor with the introduction of Lehner.

This begs the question: Does this situation with Allan Walsh’s tweet give Vegas an out to part ways with Fleury? Fleury has a no-trade clause (NTC) built into his contract, so there would have to be some coaxing if that were the case.

That hasn’t stopped the rumor mill from turning, though. San Jose Sharks beat writer/reporter Kevin Kurz has already received mentions from Sharks fans on Twitter asking him about the chances of Fleury suiting up in teal.

Spoiler alert: not going to happen.

But the possibility of Fleury waiving his NTC and moving to another NHL team, outside the Division and possibly back East, can’t be counted out of the realm of possibility.

It’s also just as likely that Fleury will play out the last year of his deal in Vegas, and then decide what his next career move will be.

But the fact that we’re even having this conversation can be partly attributed to this controversial tweet, and the ramifications of misusing social media, especially on behalf of one of your most respected clients.

For now, Marc-Andre Fleury is a Golden Knight. After this season, that remains to be seen. But him being depicted in a controversial picture could have some real consequences for his standing with Vegas brass and his future with the franchise.