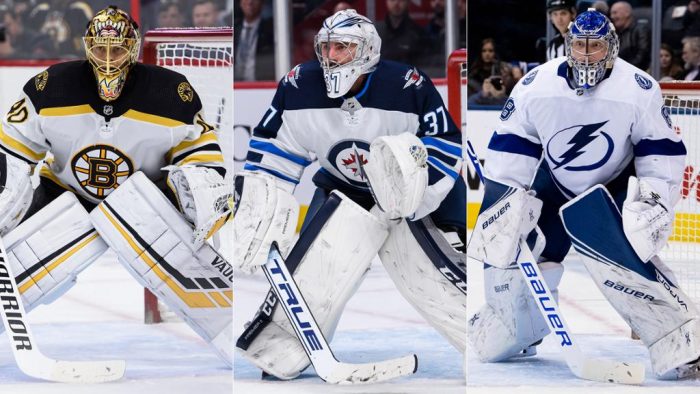 Tuukka Rask, Connor Hellebuyck, and Andrei Vasilevskiy. These three goaltenders are widely considered to be the frontrunners for the Vezina Trophy this NHL Awards season, and deservedly so. However, it leaves a bitter taste in my mouth not to see some other goalies on this shortlist, and I attribute that solely to the cancellation of the remainder of the NHL regular season due to COVID-19. However, 24 teams are still slated to return for a modified Stanley Cup Playoffs, set to begin at the end of July. So, while the NHL is still paused, let’s take a look at what could have been the Vezina Trophy discussion, and who could have made their way into the conversation by season’s end.

I don’t know about you, but it seemed to me as if there were a ton of goalies who impressed around the league this year. Whether it was a starter continuing his streak of dominance, a backup finally getting his shot to take the reins, or a rookie breaking into the league in spectacular fashion, goalies seemed to be excitingly good across the board.

Sadly, nobody got their chance to finish out the remainder of the regular season, due to the global pandemic. However, it’s still possible to look at some of the guys who could have had a shot at being in the Vezina Trophy conversation this year, had they finished out the season.

To win a Vezina Trophy, a goalie needs to have played exceptionally well throughout the entire year – not just for a short stretch, and not with too small a sample size. In other words, they need to be a bonafide starter.

Out of all the goalies who appeared in an NHL game this year, just seven appeared in 50+ games.

Hellebuyck and Price led the pack with 58 games played, a full six ahead of the next most-played goaltenders, Vasilevskiy and Andersen.

The aforementioned Tuukka Rask finished with 41 games played, and probably could have been expected to finish around the 50 games played mark.

In reality, these goalies would probably have been the only serious candidates for the Vezina (save Sergei Bobrovsky), but for argument’s sake, we’ll include some other names on the list based on some other stats.

One of the most important stats for a goaltender is the W. This is because a high number in the win column is a reflection of both the goalie’s exceptional play, and the success of the team he plays for. And when it came to W’s this season, no one had more than Andrei Vasilevskiy of the Tampa Bay Lightning.

Vasilevskiy led the league with 35 wins – a whole four more than the next guy (Hellebuyck had 31). St Louis Blues’ goalie Jordan Binnington rounds out the very short list of goalies to reach the 30-win mark, with 30 of his own.

What’s interesting, and makes this entire hypothetical Vezina Trophy debate worthwhile, is that most all of these goalies with the most games played and the most wins aren’t actually the ones who posted the best personal stats this season.

Based on personal stats alone, a whole other swath of Vezina-worthy candidates would be knocking on the door.

Let’s take a look at save percentage. Save percentage is a statistic that reflects what percent of shots a goalie has saved throughout the season.

Technically, Anthony Stolarz (who is now with the San Diego Gulls, the Anaheim Ducks’ AHL affiliate), had the best save percentage in the entire NHL in 2019-20, with a .944 SV%. Considering he only played one game, though, that’s pretty easy to do.

A couple of other rookies would have led the pack, too, if it weren’t for their small sample size of 12 games played each. Florida Panthers goalie Chris Dreidger and New York Rangers goalie Igor Shesterkin posted a .938 SV% and a .932 SV%, respectively.

But remember, only goalies with significant minutes are the ones who would actually be considered to be a Vezina nominee. And the best save percentage among all goalies with 30+ games played belongs to…Dallas Stars backup Anton Khudobin, with a .930 SV% in 30 games.

Khudobin would be nowhere near anyone’s radar for the Vezina Trophy, but 30 games is no small sample size. And down the stretch, he very likely could have played more minutes than his counterpart, Ben Bishop, based on where the Stars were in the standings.

But alas, the man they call “Dobby” will have to wait for his nomination a bit longer.

Other than those I already mentioned, there were eight other goalies with a SV% above .920, which is what would be classified as very good. These goalies were Rask, Darcy Kuemper, Elvis Merzlikins, Pavel Francouz, Antti Raanta, Tristan Jarry, Ben Bishop, and Robin Lehner.

The most impressive here is Rask, simply based on his sample size. But just as impressive to me are the guys who experienced first-time success: Kuemper, Merzlikins, and Francouz.

They all played a fairly large sample size of games, too. Kuemper played 29, Merzlikins played 33, and Francouz played 34.

The other big goalie stat is Goals Against Average, or GAA. A goalie’s GAA reflects how many goals a goaltender gives up, per game, on average.

And, technically, Anthony Stolarz is number one in this category too (2.04 GAA). See what one good game can do for your stats?

Once again, though, more games played equals more reliable stats equals serious candidate for the Vezina. And the best GAA among goalies with 30+ games played belongs to Tuukka Rask, who recorded a 2.12 GAA in 41 games. That’s really good.

Next up, we have shots against and total saves. The Top 5 goalies who faced the most shots in the whole league are Hellebuyck, Price, Vasilevskiy, Andersen, and Gibson. Hellebuyck faced 40+ more shots than any other goalie, with 1,796 total.

The Top 5 goalies in saves made are those same five.

The last statistical category I want to address is time on ice (TOI). The Top 5 goalies with the most TOI are Price, Hellebuyck, Vasilevskiy, Andersen, and Gibson. Coincidentally, (or not?), these are the same five who led the NHL in shots against, and in saves.

Binnington and Fleury were the next most-played goalies in the league. Carey Price played nearly 200 minutes more than any other goalie, for 3,439:49 total TOI.

Now, for the moment you’ve all been waiting for: based on the information provided by all these major statistics, who, besides Rask, Hellebuyck, and Vasilevskiy, could have been in the Vezina Trophy conversation?

Taking into account not only personal skill statistics, but sample size of games played and number of wins recorded, I would say the goalies who could have been included are: Carey Price, Darcy Kuemper, Elvis Merzlikins, and Pavel Francouz.

If I had to pick one, my pick would be Elvis Merzlikins. And this isn’t just because I love his name, or that he’s been an eccentric personality on and off the ice, no – I think Elvis has proved as a rookie that he is ready for the professional level, and he can compete with the best of them.

And the funny thing is, it took a Joonas Korpisalo injury for us all to realize that. If Korpisalo doesn’t go down, Elvis might never have had his time to shine this year.

I think Merzlikins would be a better fit for the Calder Trophy for the NHL’s best rookie, but young stud defensemen Cale Makar and Quinn Hughes are more likely to win that trophy. For this reason, I’d consider Elvis a snub for both the Vezina and the Calder. I’m sure his time will come, though.

While it was fun exploring some of the goaltenders who were *this close* to being part of the Vezina Trophy conversation, it still is Rask, Hellebuyck, and Vasilevskiy leading the pack. Oh well, there’s always next year.

By the way, my vote goes to Hellebuyck.