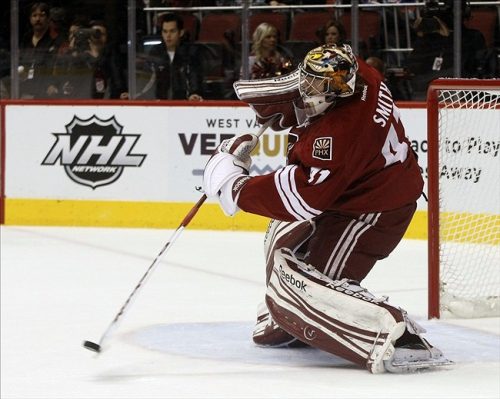 Goaltending is one of the most unique positions in all of sports, undoubtedly so in hockey. Goalies need to address every play situation differently than any other player on the ice, as well as develop skills similar to those of their teammates. An important skill goalies should work hard to develop as they get older is playing the puck. Here’s a break-down of why good puck handling is crucial, and how to work on it to hone your skills in and around the crease.

As goalies get older and start to face off against smarter players of higher skill, it’s important that they are able to make smart, quick plays on their own and with their defense when the puck comes their way. This includes knowing when to play the puck, where to play it, when to leave it for the defense or when to freeze it. By mastering playing the puck, a goalie can almost control the pace in their zone during a game. The first thing to learn about playing the puck is the different techniques for hand positioning.

Ultimately, whatever hand positioning technique a goalie wants to use is up to them. The OTT is more popular among goalies and goalie coaches, but that doesn’t mean a goalie can’t use the Underhand technique if it feels more comfortable. It, too, has its own benefits.

In order to effectively play the puck, a goalie has to understand the different plays they can make in different game situations. There are times in a game when a goalie will have no outlet pass to make in front of them, and so will be forced to rim it, reverse it, or fend it off from forecheckers until an outlet appears. Because there are so many different plays that can be made, goalies need to learn what each of those are and how they can appropriately respond.

How do I practice playing the puck?

Now that I’ve explained the techniques and play situations involved in playing the puck as a goalie, you should practice and learn it, and increase your Hockey IQ. The most important factor in getting good at playing the puck is communication. If a goalie effectively communicates with their players, they don’t necessarily need to have the most strength behind their shot, so long as they make smart decisions and the players are there to back them up if something were to go wrong.

Along with learning the tendencies of your defense and how to mesh with their play styles, here’s what you can practice any time you’re on the ice: keep your head up when you let the puck leave your stick, make short, crisp passes instead of long ones if possible, don’t force a play you’re not comfortable with, and practice passing and shooting with your goalie partner for 15-20 minutes any time you have a chance to. At the end of the day, playing the puck is just like any other part of goaltending– it’s a skill that can be improved with practice and hard work.