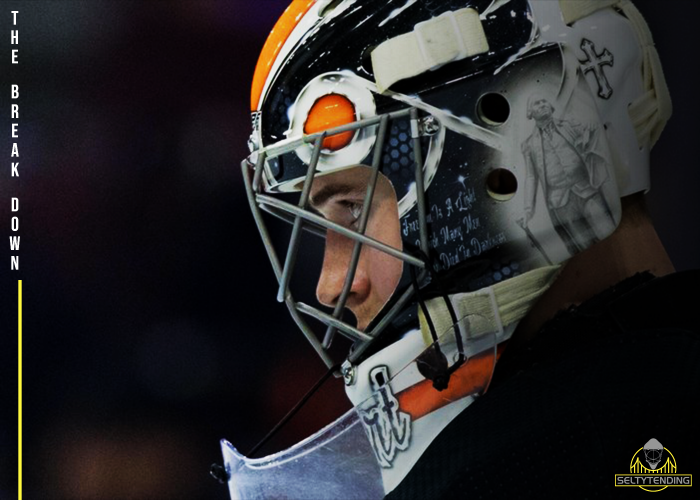 The hardest position to play in all of sports. That’s an oft-used description by broadcasters, fans, and players alike when asked about the difficulty of being a goaltender in the game of hockey. Hockey goalies bear a burden of responsibility in their sport perhaps heavier than any other position in the world, rivaled only sometimes in conversation by a quarterback in football. But if there’s one thing us hockey goalies know, it’s that no position in any sport is as physically and mentally taxing on a person than that of a hockey goaltender.

You’ll hear people in the hockey world say that when it comes to goaltending, half of the game is played in the goalie’s head. Perhaps this gives backing to the notion that all goalies “have something going on up there,” or that we are deemed a little “off,” each one of us. Or, maybe it’s because we realize the responsibility we have on the ice: that we are the last line of defense between the opposing team and the back of the net – our net. And by God, if we have to pull our groin or take a puck to the face to keep our net empty, we’ll do just that. People are right – half the game is played in our head. This makes mental preparation the most important aspect of a hockey goalie’s game. Here’s a comprehensive break-down of mental prep for goalies. 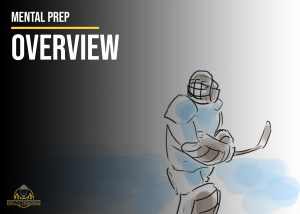 From an overview standpoint, mental preparation for hockey goalies boils down to developing a good mental outlook for yourself. This goes for practice, dry-land training, and especially for games. Creating a mental framework that helps you be the best version of yourself in goal is key to improving and keeping a level head between the pipes.

As mentioned above, a great deal of responsibility comes with playing goal – perhaps rivaled only be a quarterback in football. Goalies must master practice and game preparation, and learn how to focus on the next shot during a game. Staying focused and relaxed mid-game is hard to do, but with practice, will become easier to manage.

Goalies get stronger and more prepared, both mentally and physically, through practice, practice, practice. Each practice is not a chore and a drag for goalies like it might be for other players; in fact, it is quite the opposite. Each practice is an opportunity to get better, to improve and to feel ready for the next game and the next opponent. The harder you work both in practice and off the ice, the more prepared you’ll be, and the more confidence you will gain for the next game.

Pregame mental preparation is absolutely essential for ensuring a good performance on the ice. The tricky part, though, is that no one pregame routine will work across the board; pre game routines are personal for each and every goaltender. What works for Carey Price might not work for Braden Holtby, and what works for your goalie partner might not work for you. That is why it’s crucial to find what works for you, and to stick with it.

Be consistent – routine is critical. Have you ever watched NHL goalies on TV running through their pregame routines, throwing tennis balls against the wall or sitting on the bench darting their eyes across the ice to get “in the zone?” If you think they look a little superstitious, it’s because they are! But they’re only superstitious because they know just how important a consistent routine is to their mental preparation.

A good pregame routine should get you relaxed, but focused – calm, but ready. All of what you do should help you get prepared for anything and everything that could happen in the game. It’s important to note that you don’t need to force yourself to do anything too lengthy or elaborate, since you’ll probably have only a short amount of time away from your teammates after warming up for a game.

The one piece of advice I would give to any goalie to remember about pregame routines is this: keep it simple. Keeping it simple helps create a successful routine, and one that you feel like you can do before every game. It also helps create a good mindset, encouraging you to keep it simple on the ice. “Keeping it simple” in your goal crease puts you in position to make easier, more positional saves, and making great saves comes when you develop that natural ability that can take over in the heat of the moment.

Most importantly, simply do what you want to do. Sit down and relax, take some deep breaths, and even take a nap (at home, not at the rink), before you have to get ready for the game that day. Make sure you eat something healthy, too, and stay hydrated.

During a game, you should always be focused on the next shot. Your focus should not be on the final score, on the previous shot, or what could “go wrong” in the next few minutes, or even next period. Your focus should also never be on a puck that made its way past you into the net. Focusing on these things will do nothing but harm to your mental state – you must remain in the moment.

What’s been called “next shot focus” is what keeps you playing in the moment, and ultimately what keeps you in control of your own play, and of your side of the ice. Focusing on what you can control, like your decision making and foot movements, will produce better results than focusing on what you can’t control, like if your team takes a penalty or an opposing player gets a breakaway chance.

Finland U16 Coach Tommi Neimila tells goalies that the “biggest thing to learn” is that it’s just a game. If you let in a bad goal, he says, you let in a bad goal. There’s always the next shot, the next game, the next season, and the next opportunity. One easy goal or one big save doesn’t make a difference, and what’s important is getting better for the next save, and when tomorrow comes.

I’m a goalie. I’ve been there. I’ve been in every type of situation in a game that you could think of. I’ve been in games where I’ve pitched a shutout, and I’ve been in games where I lost 12-0. I’ve been on teams that won every game of a season and captured the championship, and I’ve been on teams that failed to win even a single game. I’ve given up easy late game goals to break ties, and I’ve made that big save on big scoring chances to seal the win. The most important thing in all of these situations is to acknowledge the play that just happened, reset in your crease and recenter your focus, and turn your attention to the next shot.

How can I find a mental prep routine that works for me?

Like I laid out in the sections above, finding a mental prep routine that works for you is finding what helps you to be the most focused, but also the most relaxed before practices and games.

If you’ve never done a pregame routine before, start simple (and keep it simple). Try doing some stretches that feel right for your body, and try to walk and jog a little bit in the hallway. Try to imagine you’re in your crease, and visualize different game situations in your head. Move your eyes with the images in your head, and maybe even move your feet with your mind, too. If you have a tennis ball, try tossing it against the wall and practice catching with different hands. If you like some quiet before a game like I know I did, find a quiet place where you can close your eyes and get ready for the game.

Whatever you do, remember to do it consistently, and make sure it’s helping you be the best you can be on the ice.

For more on mental prep for goalies and other goalie resources, be sure to check out USA Hockey’s website.