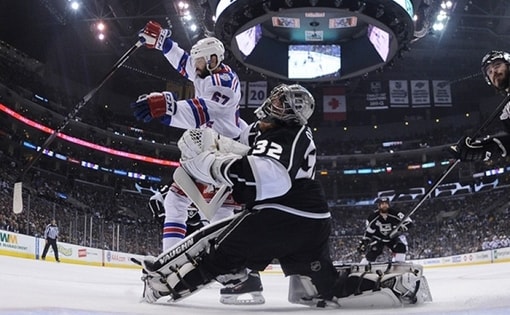 It is nothing short of typical for today’s goaltenders, NHL or otherwise, to play a moderate, reliable style, being aggressive when needed and conservative when needed— come out of the blue paint on breakaways and straddle the top of the crease under zone pressure. It makes sense then, that when Henrik Lundqvist spends an entire game near his goal line, or Jonathan Quick acts like a third defenseman, that it makes us wonder how they enjoy the success they do. Here, I break down the pros and cons and give tips on both deep and aggressive play.

New York Rangers star Henrik Lundqvist is a prime example of a goaltender with a deep playing style. The style Lundqvist employs is best described as an “inside-out” strategy, always resetting yourself and starting on the goal line, coming out from there to get in position to make the save.

Who is it for, and how do you practice it?

Goalies with sub par skating ability should try out a deeper playing style. Staying back a bit more takes the heat off of your movement and brings the focus to your hand-eye coordination and fundamental puck-stopping techniques. Anyone getting beat on odd-man rushes or finding it hard to stay square with the play might benefit from hanging out in the blue paint.

To effectively use this style, try narrowing your stance in the crease when facing a shot. A narrower stance (while still keeping your knees adequately bent) makes you taller and gives you the option of making a save without dropping into butterfly. So to practice, try a more narrow stance, be patient and decide whether to drop, and rely on your hands to do the work. Also, try to get good at holding onto the puck on any type of shot to get a whistle.

If you have ever watched a Los Angeles Kings game, you’ll have noticed Jonathan Quick. You may have yelled, “What are you doing? Get back in the net!”, however, despite giving fans a heart attack every now and then, Quick is consistently one of the league’s best goalies. So, what is it about his play style? Opposite from Lundqvist, Quick plays an “outside-in” style. This means that he starts from an aggressive position and matches his retreat into the crease based on the attack.

Who is it for, and how do you practice it?

Goalies gifted on their feet and with their hands should practice an aggressive play style. The two biggest strengths of an aggressive goaltender are their skating and their puck playing skills. Goalies who like to use butterfly most of the time should try it as well, as the two go hand-in-hand, along with a low stance.

In practice, try focusing on a couple of things: widen your stance so your knees are farther apart and lower to the ice, pass the puck back and forth and rim it around the boards for at least 5 minutes with your goalie partner or another player, and practice skating and sliding around the circles and in your crease. Also, work on a quick poke check.